2014 has been a very mixed year for natural gas, according to the First Estimates 2014 released by the International Association CEDIGAZ today. For the second consecutive year, gas demand slowed down in 2014, with subdued activity in the global gas industry at all stages of the chain. 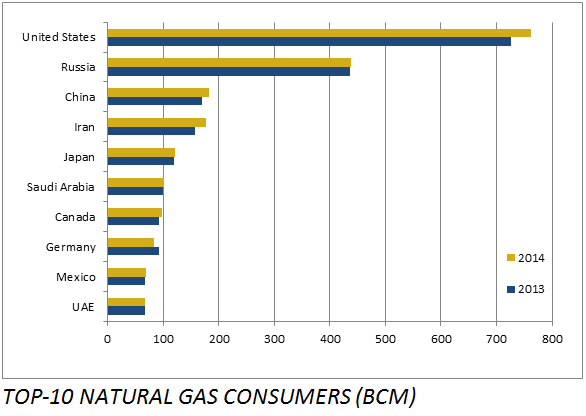 Global natural gas consumption (including storage variations) was sluggish in 2014 and remained at a quite similar level than in 2013. This can be explained by increased competition between energies, especially coal, the economic slowdown (Europe, China, Russia…), geopolitical turmoil (Russia-Ukraine conflict) and the mild weather conditions which negatively impacted the expansion of gas demand (Europe, Asia). The global consumption trend showed regional disparities. Natural gas demand in North America and the Middle East continued to register strong expansion, but the growth in Asia slowed down, while consumption in the Commonwealth of Independent States (CIS) and Europe declined dramatically. Plummeting consumption in Europe (- 10%) in particular weighed significantly on the overall trend. 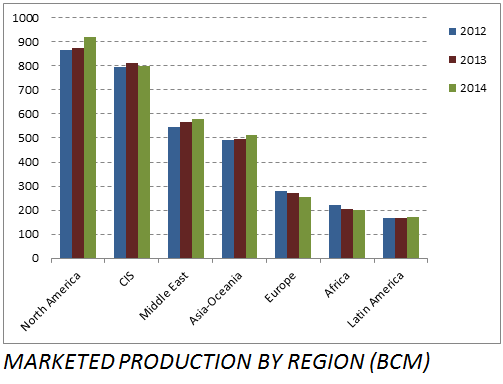 In a context of weak demand,world natural gas supply increased by only 1.1% to 3,437 bcm in 2014, a quite similar trend than in 2013, contrasting with the sustained average growth in the order of 2.8% per annum recorded in the 2000s (including the decline in 2009, offset by an upturn during the economic recovery of 2010). In some emerging markets, production was affected by the decline of mature fields and a lack of upstream investment required to boost the exploitation of new reserves. The case of Egypt is a striking example.

World gas trade declined strongly by 3.4% to 1,005.2 bcm in 2014. The international pipeline trade contracted significantly by 4.8% to 691.5 bcm, affected by the slump in Russian gas deliveries to Europe and Ukraine (in relation to the six-month interruption of gas flows). The international LNG trade remained flat at 313.7 bcm for the third year running. World gas trade now accounts for 29% of marketed production, and LNG 31% of total trade.

2014 marked a turnaround in the world LNG industry, after three years of market tightening. In Asia, new LNG supply combined with weak, predominantly weather-related demand, resulted in a slump in LNG spot prices and the diversion of cargoes to Europe towards the end of the year. For the year as a whole, European net LNG imports pursued their decline (- 6.2%) but at a slower rate than in the two previous years, whereas LNG demand growth in Asia-Pacific slowed down to 1.2%.

In summary, specific constraints on both the supply and demand side have limited the growth of the gas market. The year 2014 emphasizes in particular the deceleration of demand due to intense competition with cheap coal in both industrialized and emerging markets. In this context, global growth in gas demand in the short term is likely to remain low by comparison with the dynamic seen in the past fifteen years.

To stay updated on our latest free downloads, follow us on Linkedin