Natural gas demand grew by 1.6% in 2015 according to Cedigaz after having stagnated in 2014. However, this apparent, if modest, resumption of global gas market growth can be misleading as the higher growth rate is essentially the result of a weather driven recovery in the EU where demand rebounded by 4.5% after having dropped by 11% in 2014. For the rest of the world gas demand growth was actually lower than in 2014 (1.2% vs. 2%) and was pulled by a limited number of countries led by the US. The inability of natural gas demand to keep pace with an accelerated supply growth, led to an imbalance in the global gas market and to a price weakness which is expected to continue in the short and medium-term, amid a sluggish economic environment.

The year 2015 saw considerable changes in macroeconomic and price factors. Economic growth stood at 3.1%, lower than at any time since 2012 (3.3/3.4%) and also lower than the 10‐year trend (3.8%). This was the result of the relatively modest growth of the emerging countries (4% compared with 6% over ten years), although western countries’ growth rate exceeded the 10‐year average (1.9% compared to 1.5%).  International crude oil prices fluctuated to new lows, with Brent averaging 52/bl, down by 47% from the previous year.

Many events had a major impact on natural gas market developments in 2015: the decline in prices for all fossil fuels, the slowdown of China’s economic growth (+ 6.9%), the renewal of nuclear energy in Asia together with a booming expansion of renewable energy capacity, the fast decline of Chinese energy intensity, the curtailment of Groningen gas field production, the decline in Asian gas premium and the gas pricing reform in China. The weakness of the oil price impacted that of long-term LNG contracts, the majority of which is still indexed on oil. The falling oil price also acted as a cap on spot LNG in Asia, through oil switching in the power and industrial sectors. Overall, regional gas prices tended to converge except for North American prices which remained significantly lower than in the rest of the world.

With a weakened economic outlook in emerging countries and increased inter-fuel competition and mild weather conditions in Asia, 2015 was characterized by a moderate growth in world gas consumption, up 1.6% to 3472 bcm, according to Cedigaz first estimates. Demand growth remained concentrated in a small number of countries with the North American market, under the impetus of the US, and the Middle East providing the largest contribution, followed by Europe. In the United States, record low gas prices alongside environmental policy initiatives is encouraging coal-to-gas switching. Strong growth was also recorded in the Middle East, under the impulsion of Iran and the UAE. In Europe, the recovery of gas demand in 2015 was essentially due to the return to normal weather conditions in the first months of the year, following a mild winter in 2014. Reversely, gas consumption growth came to an halt in Asia with strong declines recorded in Japan and South Korea and a marked slowdown of consumption growth in China. Strong consumption decline was also registered in the Commonwealth of Independent States (CIS), especially in Russia, where GDP contracted by 3.7% in 2015.

In spite of depressed gas prices production grew strongly again in North America (+ 4.1%), where gas supply continues to be boosted by unconventional gas. Production also increased significantly in Asia-Oceania (+ 3.3%) and the Middle East (+ 3%). Reversely, it stagnated in Latin America and dwindled in Europe (- 2.7%), the CIS (- 0.6%) and Africa (- 2%). 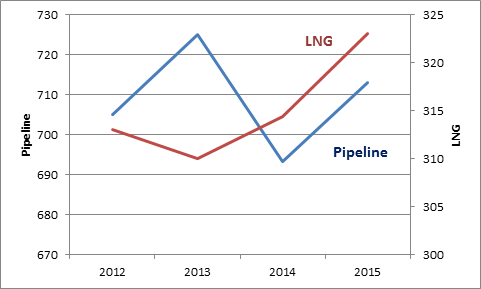 After falling by 4.4% in 2014, international natural gas pipeline trade resumed growth in 2015, up 2.9%, according to Cedigaz estimates. This growth was mainly due to a rebound in Russian gas exports to Europe, where surging consumption combined with falling indigenous production resulted in a growing dependence on extra-regional imports.

LNG production growth in Asia-Oceania quickened, whereas LNG demand was constrained by economic factors and inter-fuel and pipeline gas competition, causing a growing imbalance inside the Asian market (with declines of LNG imports in Japan, South Korea and China) and an LNG glut which benefited Europe. In this context, LNG trade returned to growth after three years of stagnation.

Recent trends on gas markets highlight some of the structural economic factors which stifled growth in natural gas demand. Moderation of gas demand has been caused by intense competition with cheap coal (and more recently oil in China) in both industrialized and emerging markets, the development of renewables and nuclear, as well as increased energy efficiency and slower economic growth. Overall, except in the United States and a limited number of countries, essentially situated in MENA and Southeast Asia, the future of gas faces many challenges.

Cedigaz is an international association with around 90 members worldwide, created in 1961 by a group of international gas companies and the Institut Français du Pétrole Energies nouvelles (IFPEN). Dedicated to natural gas information, CEDIGAZ collects and analyses worldwide economic information on natural gas, LNG and unconventional gas in an exhaustive and critical way.