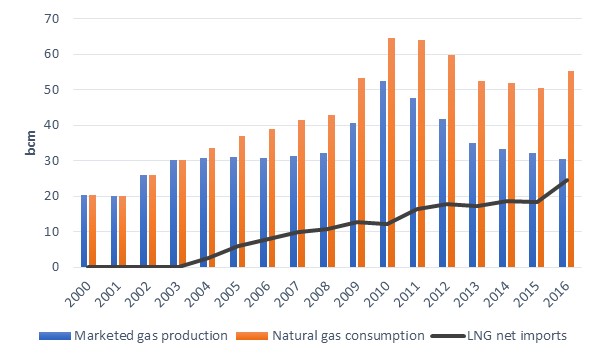 Despite a decline in global coal demand for the second consecutive year, international steam coal prices doubled in 2016. This massive rise may seem paradoxical; in fact, it responded to market fundamentals: a tightening of the international market due to an unexpected surge in Chinese coal imports and the inability of exporters to meet this sudden increase. The surge in Chinese imports was not due to increasing demand – Chinese coal consumption in 2016 fell for the third year in a row– but to domestic production restrictions mandated by the Chinese government from April 2016. To remove excessive and outdated capacities in the domestic coal sector, that weighed on domestic coal prices, the government required coal mining companies to cut operating days from 330 to 276 a year. The new regulation led to a fall in coal production, shortages of coal and a steep increase in domestic coal prices, forcing power utilities to turn to the international market. However, after five years of low prices and reductions in investment, exporters were not able to respond to this sudden demand and international prices increased to clear the market.