NBP: – 8% in early April compared to the March average 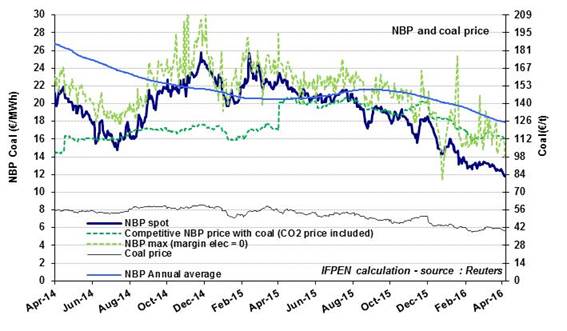 The winter season for the gas industry (October 2015 to March 2016) closed with the NBP price very low at €15.4 /MWh ($4.9/MBtu), which is 30 to 46% lower than for the three previous winters. The downtrend that started in early 2015 resulted from a relatively abundant supply and a decline in the prices of contracts 100% indexed on oil. In fact, these prices defined the NBP trend. The decline continued in the first April quotations (-8% compared to March) as the NBP dropped below the €12/MWh ($4/MBtu) mark. The markets are expecting a minimum price of €11/MWh ($3.7/MBtu) during the summer. The fact that the volumes stored in Europe are relatively large partly explains the absence of price pressure.

NBP: down next summer 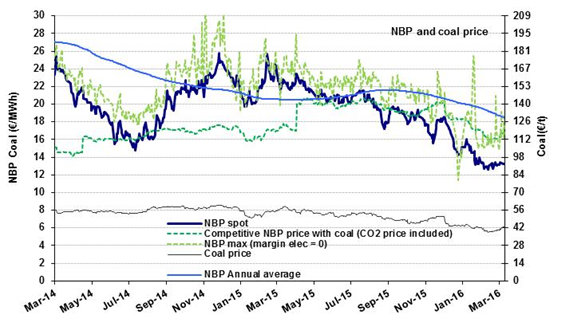 In the first few days of March, the NBP was quoting at about €13/MWh ($4.2/MBtu), close to the previous month’s average. These levels are extremely low. Not since April 2010 (euro prices) and October 2009 (dollar prices) have such low numbers been recorded. The monthly average hit rock bottom at €7.6/MWh ($3.3/MBtu) in September 2009. The markets are not anticipating prices to drop that much next summer, but a series of decreases from the current levels to the vicinity of €11.8/MWh ($3.9/MBtu). For next winter, the NBP is expected to reach $14-15/MWh ($4.6-5.0/MBtu), in line with contracts 100% indexed to oil. This convergence indicates that the market deems $4.6-5/MBtu to be the lowest equilibrium threshold tenable in an average winter.

According to Cedigaz’ First Estimates, LNG imports grew by 2.1% in 2015 to 241.2 Mt. Main highlights include the reversal of growth trends in Asia and in Europe, the emerging role of the MENA countries as LNG importers and the growth of intraregional and intra-basin trade due to the convergence of global prices.

Change in growth trends in Asia and Europe

After many years of growing demand in Asia and declining demand in Europe, trends changed on the two largest LNG markets in 2015. For the first time since 2009, Asian LNG net imports declined by 2.8% to 172.8 Mt (-5Mt) mainly because of weather related factors, gas-fuel competiveness and the slowdown of economic growth. The bulk of the decline came from Japan and South Korea, the two biggest importers in the world: in these two countries, LNG net imports declined respectively to 85 Mt and 33.4 Mt which represents a combined decline of 7.2 Mt (-5.8 %). In a context of slowing economic growth and poor gas price competitiveness, Chinese demand dwindled by 0.9% to 19.7 Mt while LNG imports grew at an average annual rate of 20.1% from 2010 to 2014. Rising imports in Thailand (+ 1.3 Mt to 2.6 Mt) and Taiwan (+1.1 Mt to 14.6 Mt), as well as the beginning of imports in Pakistan (above 1 Mt) did not suffice to offset the regional decline.