2017 was a key and challenging year for the Chinese gas sector. All indicators point to an acceleration of natural gas penetration in the energy mix and an intensification of gas market reforms to facilitate this expansion.

Boosted by the recovery of Chinese economic growth, the acceleration of coal-to-gas switching policies, and the rebound in the competitiveness of natural gas relative to competing fuels, China’s natural gas consumption reached a record high level. According to the National Development and Reform Commission (NDRC), natural gas consumption rose by 15.3% to 237.3 bcm in 2017. China was the world’s fastest growing gas market: the country alone accounted for a quarter of global growth in gas consumption.

Evolution of Chinese gas imports by pipeline and LNG tankers 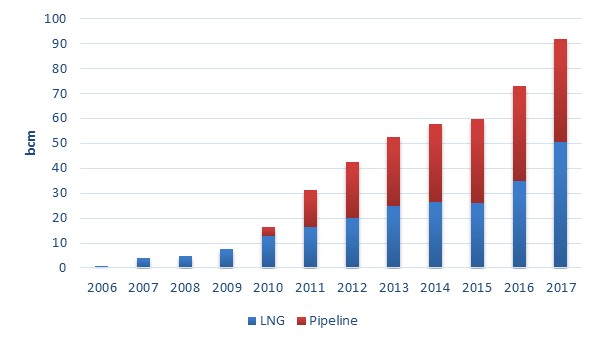 Domestic production surged to 148.7 bcm in 2017, up 8.5% from 2016, but was insufficient to cover the growth in demand. Natural gas imports leapt by 26% to fill the gap between supply and demand (92 bcm). LNG imports played a major role in meeting the extra demand, because of the limited capacity to increase domestic production and pipeline imports at short notice. LNG imports soared to an all-time high of 50.7 bcm (+46% year-on-year), including 11 bcm from the spot and short-term market. China was the largest contributor to LNG demand growth. The increase pushed China into the second place among the world’s LNG importers, surpassing South Korea. Imports by pipeline increased modestly (+3.3 bcm to 41.3 bcm in 2017), but remained below contractual commitments, notably during the peak winter season. Thus, LNG imports became the first source of external supply, accounting for 55% of total gas imports in 2017. China overtook the United States to become the world’s third largest natural gas importer after Germany and Japan, accounting for almost 8% of global gas imports. Chinese LNG imports increased sharply during the peak winter season, driving the spot price of LNG to levels not seen since late 2014. Asian LNG spot prices doubled from June to December 2017 and reached over $11 per million British thermal units (MBtu) at the end of 2017. China’s strong appetite for LNG imports has erased the expected LNG supply glut, at least during the peak winter season. The country’s dependence on imports surged from 35% in 2016 to 39% in 2017, a level that is likely to drive further energy security measures. 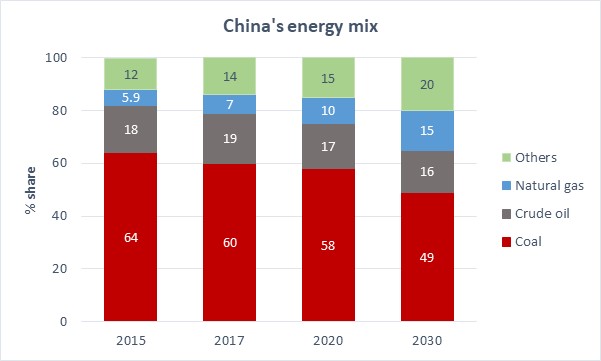 The rapid increase in gas consumption led to widespread winter gas shortages, exacerbated by lower gas supply than planned, transportation bottlenecks and a lack of storage capacities. The gas shortage has exposed the need to rapidly reform the gas sector. The supply tightness eased at the end of the heating season. However, Chinese gas demand has remained robust with a 17.5% growth in the first half of 2018.  Natural gas has become a key policy choice in China to reduce air pollution and restructure its high-carbon energy mix. Natural gas consumption will continue its strong growth boosted by policies to accelerate the use of natural gas and coal-to-gas switching in key polluted regions. This expansion creates new challenges and opportunities for the Chinese and global gas market. In the short term, China needs to solve its supply and demand imbalance during peak demand periods. In the medium to long term, the restructuring of China’s energy mix points to a large increase in gas demand by all consuming sectors and China needs to adapt its domestic and external gas supply and its infrastructure to new high levels.