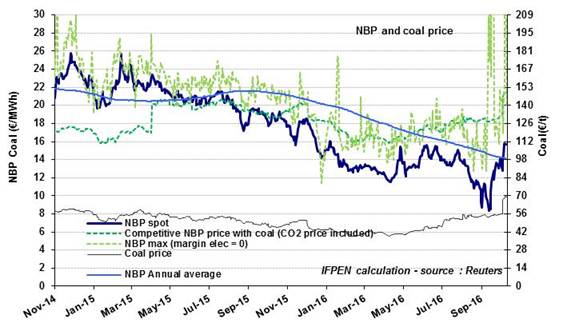 The Brent rose steeply (+58%) between January ($31/b) and June ($48/b). The first quarter was dominated by economic fears, which gave rise to sharp downward corrections on the financial markets between December and February 2016. This led to some very pronounced downward movements on the oil market early in the year. On January 20, for instance, the Brent fell to $26/b, losing $10 in less than one month. The “Brexit effect” has also brought the oil price down: on June 24, the price fell to $46.7/b (-4%) due to Brexit-related financial and monetary consequences (e.g. a rise in the dollar) and economic uncertainties.

Even so, the trend since January has continued to be oriented upward, fueled by the weakness of the dollar until April and also by expectations of seeing a gradual shrinkage of the surplus oil supply. The underlying reasons were the relatively sustained oil demand in 2016 and the steady decline in U.S. production of tight oil since June 2015. Conjunctural factors also weighed on the price, especially production shortfalls in Canada and Nigeria. All of which served to offset the strong rise in supply from Iran, where production may have reached a plateau.

NBP: influenced by the LNG and oil markets

In April, the NBP saw fairly marked fluctuations, ranging from +18% to -10% compared to the monthly average. In a temporary surge, it exceeded €15/MWh ($5/MBtu) on April 26 and 27. A situation of momentarily sustained demand coincided with deficiencies of supply, resulting in heavy recourse to storage. However, monthly averages have been more stable since February, between €12.7-13/MWh ($4.2-4.3/MBtu). The price for early May and the forward quotations for the summer months (until September) stand at about the same levels. Obviously, lower prices cannot be excluded, in light of the market equilibrium conditions. On April 11, the price fell to €11.5/MWh ($3.9/MBtu), its lowest level in recent months, in step with the conditions prevailing on the LNG market in Europe at that time.