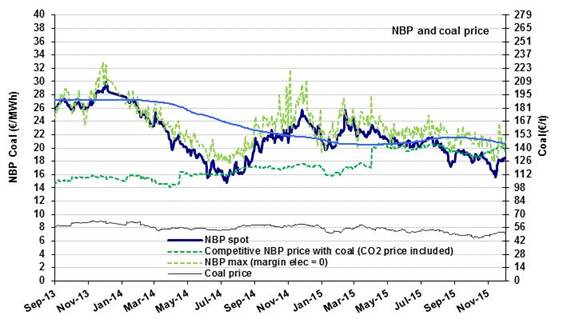 NBP: Weather conditions and coal are weighing on prices

The trend in the coal price has also played a key role. It stands at €49/t ($53/t) for November, down 18% in one year. This is on the same order of magnitude as the price reported in 2009. Back then, the NBP price was about €10/MWh ($4/MBtu) and had even sunk as far as €7.7/MWh ($3.3/MBtu) in September. If the coal price remains at its current level, should the NBP be expected to fall that low? The business environment is different, especially in the United Kingdom, where a carbon tax (Carbon Price Support) of €25/MWh (£18/t) helps support the NBP price by making natural gas more competitive with coal. However, on the Continent, the CO2 price is €8/t and the equilibrium price compared with coal is lower, estimated at only €12/MWh($4/MBtu). This may give rise to downward pressure, especially if the winter is mild, hence to a low inventory draw. This being said, the markets are not anticipating such a pronounced downtrend, but prices of €18.5/MWh for winter 2016 and €17/MWh for next summer.

Indexed European price: the trend is down