In 2014, the LNG year was somehow a replica of the previous one as it was characterized by rising Asian demand, decreasing European demand and a high price differential between the two biggest LNG markets. In 2015, as the trade data of Q1 show, the dynamics are likely to be different. First data show that the pressure on the Asian market is falling due to lower demand and growing production in the Pacific basin. In addition, gross imports are increasing in Europe while the re-export business is collapsing. Elsewhere in the world, the LNG industry continues to develop, as new projects keep coming on stream.

Downward pressure on the Asian market is set to continue

In Asia, a significant decline in LNG prices marked the first three months of 2015. As a consequence of the drop in oil prices and softening market conditions, average import prices dwindled in all importing countries. In Taiwan, prices plummeted by 23.7% from $10.6/mmbtu in January to $8.1/mmbtu in March and in Japan, prices fell by 19.4%, from $15.2/mmbtu to $12.2/mmbtu. In the meantime, prices decreased at a slower rate in South Korea (-8.4%) and in China (-8.8%). After four years of high prices caused by high oil prices and, to a lesser extent, tensions on the Asian LNG market, average import prices are now going back to the Pre-Fukushima levels. 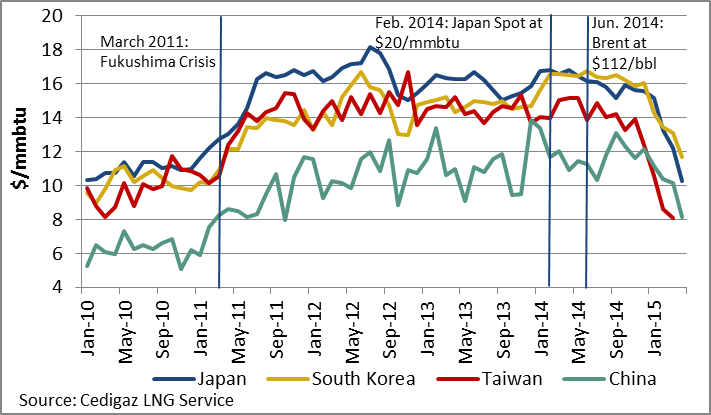 First of all, such a drop can be explained by the collapse of oil prices and the share of oil-indexed long-term volumes in total imports in traditional importing countries. In 2014, deliveries based on long-term contracts represented over 71% of imports in Japan, 76% in South Korea, 79% in China and 81% in Taiwan according to GIIGNL. As most of Japanese contracts are indexed on the Japanese Crude Cocktail (JCC), the decrease in average import prices reflects the collapse of crude prices from the summer 2014. In Japan, assuming that most of the contracts include a 3-month lag with JCC price, long-term LNG prices are expected to fall until June. Based on a typical 14.5% slope plus a fixed cost of $0.5/mmbtu, long-term prices are likely to reach 8.4$/mmbtu in June. In the second half of 2015, assuming that JCC will fluctuate between $60 and $63 per barrel based on Brent estimates for June and futures, long-term prices are likely to oscillate between $8.6/mmbtu and $9.8/mmbtu. Considering the same assumptions on crude oil price and assuming that spot LNG price will average $7.8/mmbtu as in H1 2015 and that it will account for 29% of imports, average import price in Japan could reach $8.8/mmbtu on average in H2 2015 (against $15.7/mmbtu in H2 2014). 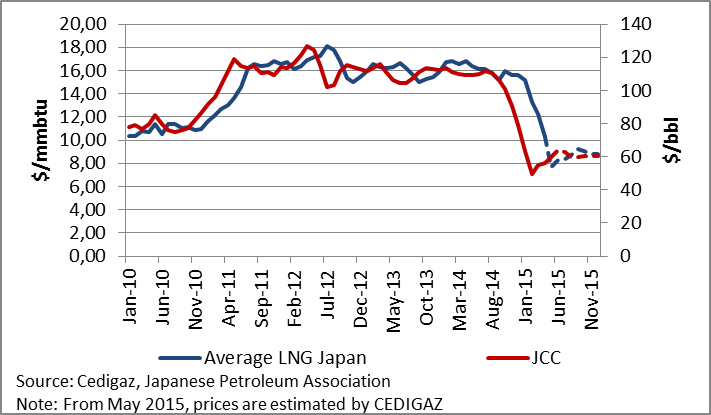 Furthermore, average prices dropped because LNG spot prices collapsed in Asia. Even if the fall coincided with the drop in crude oil prices, the decrease is mainly due to changes in market fundamentals, including softer demand growth and increased available supply in the Pacific basin. According to Reuters’ assessments, the price of LNG delivered to Japan on a spot basis continued to decrease in the first quarter of 2015. After peaking at $20/mmbtu in February 2014, spot prices stood at $14.3/mmbtu in October 2014, $9.9/mmbtu in January 2015 and $7.6/mmbtu in March 2015.

On the demand side, LNG purchases of the regional top-3 buyers (Japan, South Korea and China) decreased by 5.5% year-on-year in the first quarter of 2015, from 42 million tons to 39.7 million tons. The drop was pulled by a 19% decrease in South Korea (-2.4 million tons) where higher inventories and another mild winter pushed imports down. In addition, nuclear restarts and a switch to coal by power generators initiated in 2014 pulled natural gas demand from the power sector down: in Q1 2015, KOGAS’ sales to the power sector decreased by 14.3%. 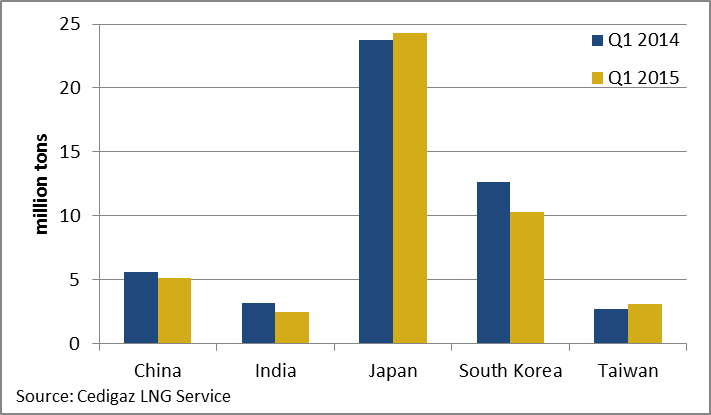 The decrease in Asian LNG demand in Q1 2015 also coincided with an increase in available supply from the Pacific basin. The PNG LNG reached plateau production in Q4 2014 and has been operating at full capacity. The first liquefaction plant sourcing gas from Australian CBM reserves, QC LNG, also started operations in late December 2014. In Q1 2015, Papua New Guinea sold 1.78 million to Japanese, Chinese and Taiwanese buyers and QC LNG shipped 9 cargoes. In the meantime, delivered cargoes from the Australian North West Shelf and Pluto increased and Malaysian Q1 exports grew from 6.55 million tons to 7.11 million tons year-on-year. Overall, buyers were left with ample supply so that their need for spot cargoes was limited and pressure on spot prices decreased.

Intra-regional exports in the Pacific Basin in Q1 2015 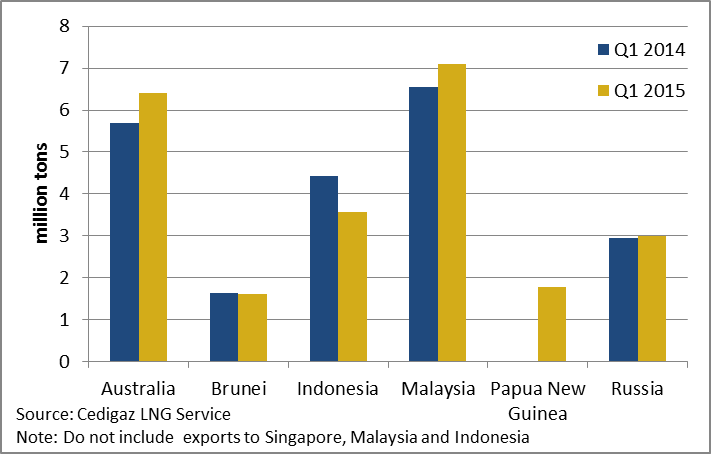 In 2015, spot LNG prices are therefore expected to remain low in Asia because of moderate demand growth and increasing supply. On the demand side, South Korean 2015 imports are expected to slightly decrease year-on-year along with the approval of the life-span extension of the reactor No.1 (679 MW) of the Wolsong nuclear plant in February 2015. In Japan, the planned restart of the first reactor of Kyushu’s Sendai nuclear plant (890 MW) in August, followed by the second reactor (890 MW) in September or October, are expected to impact fuel oil demand rather than LNG demand. The latter is therefore likely to remain at the level of 2014. In China, where economic growth is slowing down (7% expected in 2015 against 7.7% in 2014), domestic natural gas production increasing and pipeline imports growing, LNG imports growth could also slowdown in 2015.

On the production side, 29.6 mmtpa of liquefaction capacity is expected to come on stream by the end of 2015 in the Pacific basin. These capacities will be brought by the second train of QC LNG and two other CBM projects (Gladstone LNG, Australia Pacific LNG) and by Gorgon LNG. The 2 mmtpa Donggi-Senoro is also expected to start operations in Indonesia. Since the beginning of operations of these projects is not planned before Q3 2015 or Q4 2015, their impact on Asian market should be limited in 2015.

Europe is strengthening its position as a swing market 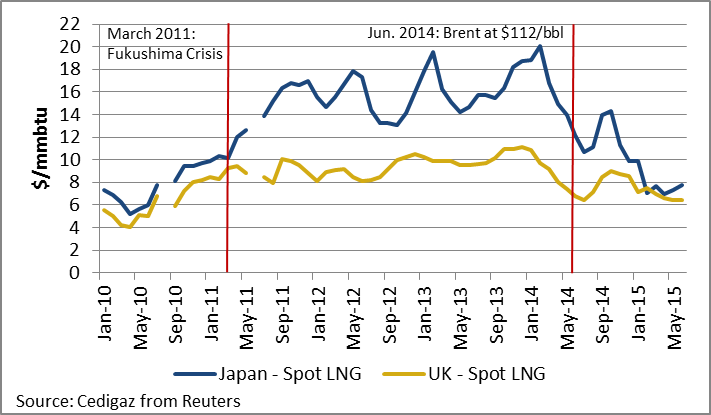 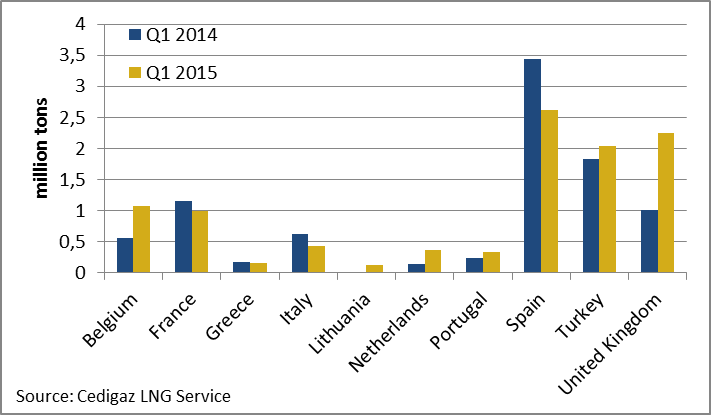 In Spain, imports dropped by 23.8% from 3.43 million tons to 2.61 million tons as a consequence of the collapse of the re-export business. In Q1 2015, Spain re-exported only one cargo to South Korea another to Brazil (0.13 million tons) while it had re-exported 11 cargoes mainly to Asia and Latin America (0.7 million tons) in Q1 2014. With the Asian premium at its lowest level since 2011, the re-export of LNG from Europe to Asia has become uneconomic. Similarly, the drop in Brazilian spot prices in Q1 2015 to $11.9/mmbtu caused by the additional supply left available by Asian buyers diminished the attractiveness to re-export LNG across the Atlantic Ocean.

After three years of decline, net LNG imports in Europe are expected to grow overall in 2015, as gross imports already increased by 13.6% year-on-year in Q1. The oversupply in Asia is set to continue throughout 2015 and to contribute to low spot prices in the region. Swing exporters like Qatar are therefore likely to favor shipments to Northwest Europe. In the United Kingdom, the power sector is expected to pull the demand for natural gas as the coal-firing generation is decreasing. In the three months to February 2015, the UK production from natural gas was 15% higher than a year before while coal-firing was down by 16%, mainly because of coal unit outages and coal-to-biomass conversion. This trend is likely to be confirmed in 2015 as the UK carbon price floor almost doubled from $14.3/ton of CO2 to $27.1/ton of CO2 in April increasing the economic competitiveness of gas. Despite gloomy perspectives for the LNG re-export business in Spain, the reduced hydropower availability should increase the demand from gas-fired combined cycle power plants and contribute to limit the drop in LNG net imports.

Elsewhere in the world, the LNG industry continues to grow

In the rest of the world, the emergence of new players is highlighting the growing complexity of the global LNG market. Pakistan joined the group of LNG importers and the Excelerate Exquisite, which operates both as a regasification vessel and as a LNG carrier, delivered 0.2 million tons of LNG from March to May to the South Asian country.

Egypt received its first shipment from Qatar in early April, after it sent its last cargo of domestically produced LNG in October 2014. From April to May, Egypt imported 6 cargoes or about 0.4 million tons, becoming the first LNG importer in Africa. In order to meet rising domestic demand and offset lower-than-expected gas production, the country is planning to charter a second FSRU to be chartered for a five-year period.

In late May, Jordan also received its first cargo of chilled gas from Qatar. Like in Egypt and Pakistan, the Jordan terminal is using a FSRU and emphasizes the ability for countries – by using this technology – to quickly put on stream terminals when there is a need. In February 2015, the reconverted Arun LNG terminal (Indonesia) also received its first shipment from the Indonesian Tangguh LNG plant. In H2 2015, Additional capacities will be added in already-importing countries, including France, Spain, Chile, China, Japan and South Korea. In Poland, the Polskie LNG project is suffering delays in construction and first commercial operations are now not expected to begin before 2016. The diversification of importers is set to continue in the coming years, as proposals throve in the first months of 2015, including plans in Ghana, Senegal, and Myanmar. In the meantime, shipping managers are ordering more FSRU’s which confirms the development trend of the technology.

Commissioning of Regasification Terminals in the World in 2015

As mentioned earlier, the ramp up of Australian plants and the diversion of exports from Qatar marked the first quarter of 2015. In the Middle-East, the Yemen LNG plant remained operational in Q1 2015 despite increased violence in the country. It finally declared Force majeure in April after all staff was evacuated. In Algeria, the Skikda LNG plant was closed for two months in Q1 2015 because of maintenance, but it did not impact deliveries to Asian customers. However, deliveries to Spain reduced from 1.13 million tons in Q1 2014 to 0.63 million tons in Q1 2015 and in France, imports dropped to 0.44 million tons. In Africa, the Angola LNG plant was still closed but the operator is now targeting Q1 2016 for exports to re-start.

In the United States, new proposals for liquefaction plants have slowed down in Q1 2015. Only two large scale new projects (G2 LNG and Port Arthur LNG) have submitted a request to the US Department of Energy to export LNG. However, many already-known projects have moved forward by starting the Pre-filing process to the FERC. While in 2014 four projects proposed in the Lower-48 initiated the process, four other projects had already pre-filed the request as of June 2015 and Freeport LNG and Cameron LNG have asked for an authorization to expand. In the meantime, Cheniere took the FID on the first two trains of Corpus Christi and received the authorization to build trains 5 and 6 at its Sabine Pass facility. Freeport LNG also announced the FID for train 3 of its plant to be located on Quintina Island, Texas. 2015 is likely to see the end of the rush for LNG in the United State, though, since many projects have now to enter into the environmental assessment process. Last but not least, the construction of the first train of Sabine Pass is moving on and as of May 2015, it was completed at 87%: first shipment is planned to be sent by the end of 2015.