Based on case studies of four countries (UAE, Russia, Argentina and Pakistan), this new report by CEDIGAZ analyses the influence of subsidies on gas supply and demand dynamics.

Gas price subsidies have a significant effect on the gas consumption. Simply put they embody the inexorable link between the price of a good and its demand. By artificially lowering the price of gas, it can become more competitive as a fuel, potentially even crowding out other fuels or technologies, as well as encouraging excessive consumption that would not have occurred in the absence of subsidies. The extent to which either of these situations are the case is dependent on the subsidies of a given country with two particular factors; price/level of discount and how much of the population it is available to. The cheaper the gas the more widespread and heavy its use (or the use of a byproduct of gas such as electricity, heat or water) will be. Additionally if subsidies are extended to larger parts of the population then not only does that increase the amount of users whose consumption may be wasteful but it also extends cheaper gas to richer households who are typically higher consumption users and therefore capable of wasting more. It therefore follows that any countries wishing to reduce or cut their subsidies will likely see their gas demand fall.

Gas prices subsidies while supporting gas consumption, can a have serious impact on production and investment, as well as the financial stability of affected companies. Where subsidies are enabled by enforced low wellhead prices, this is likely to lead to limited investment by foreign producers, and financial problems for national or state-controlled producers, who may be forced to sell gas at a loss. Alternatively gas may be purchased or imported at a world price and sold at a lower price locally which is likely to push losses onto local supply companies. While gas consumption and therefore sales volume may be inflated, the profitability of the companies is likely to be limited, or even negative, which may require further cross-subsidies to prevent collapse, and make it hard for gas companies to invest in meeting growing gas demand.

The presence of gas subsidies also tends to lead to significant regulatory risk – if gas consumption is inflated due to artificially low prices, the existing gas market is dependent on the continuation of those subsidies for its growth. If government policy changes, rising prices may impact both on consumers and suppliers leading to uncertainty in current and future development.

The report conducted case studies of four countries: UAE, Russia, Argentina and Pakistan. In all four countries, subsidies have distorted the energy markets. This has resulted in supply problems which hinder exports or force expensive imports, threats to financial stability as well as the future of the domestic energy industry (all four countries have at the very least reasonably sized reserves). Therefore, the first response is often to seek to curb the demand by reducing or eliminating subsidies.

Despite being fairly well set up for high levels of gas consumption due to the vast and inexpensive nature of its reserves, much of which has been a byproduct of oil, UAE has suffered from overconsumption of gas. In fact, as the graph below shows, despite its vast reserves, recently estimated at around 6.1tcm, consumption now outstrips production, forcing UAE to curb its LNG exports as well as import LNG in spite of the fact that it already imports very cheap gas via pipeline. 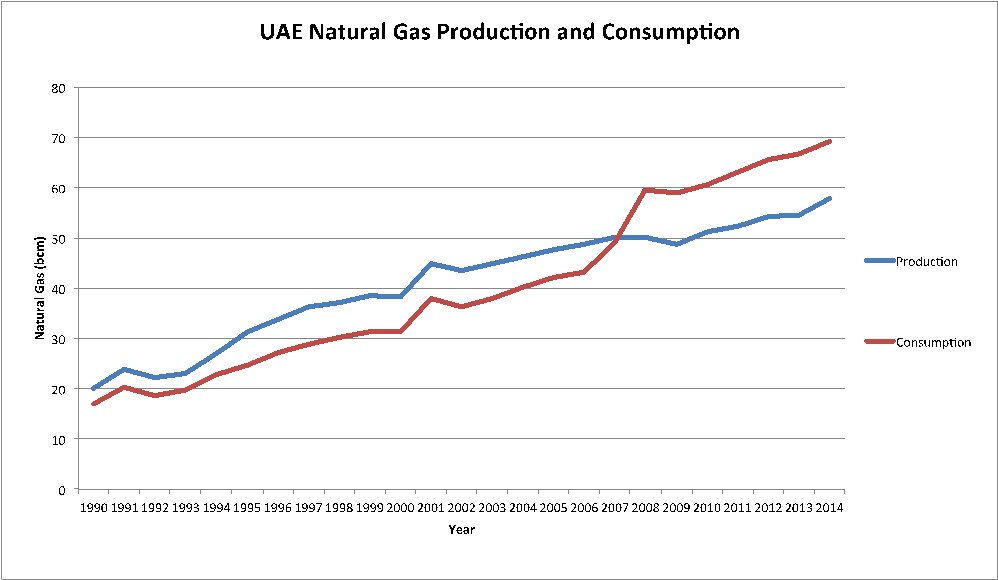 Figure 1 – Natural Gas Production and Consumption in the UAE

In response to this burgeoning demand, which has seen UAE develop a high energy consumption per capita of 11 toe, it has already begun to reform its subsidies to electricity and water – which benefit from low gas prices and pass savings onto the consumer – which will be expected to hit demand. Additionally, gas demand will also be limited in the power sector where UAE is constructing nuclear power plants and more renewable energy.

Argentina, although not possessing the reserves of the UAE, finds itself in a similar position. Its gas subsidies, which have seen prices remain low for a sustained period of time, have had the dual effect of seeing consumption rise and production fall. 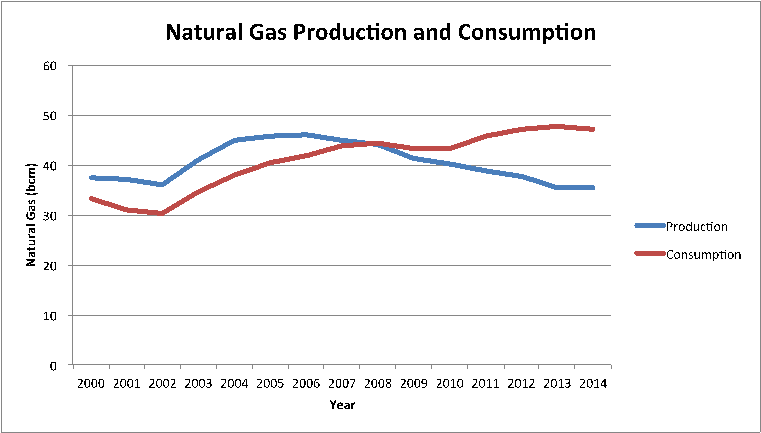 As with the UAE, the rise in consumption, which has required Argentina to import LNG, has forced it to take action. One of its decisions has been to modify subsidies, which will also likely hit some of the excessive consumption.

Pakistan’s problems are arguably more systemic than in Argentina and UAE. It has developed a subsidised gas-centric economy, with gas playing a vital role in electricity generation, industry, transport and heating. These sectors are suffering from a lack of gas, which has already hit demand. Although Pakistan is trying to crack down on theft and leakage, import more gas and reduce subsidies, ultimately one would expect demand in some areas may falter as the price of gas increases or its supply becomes too unreliable. 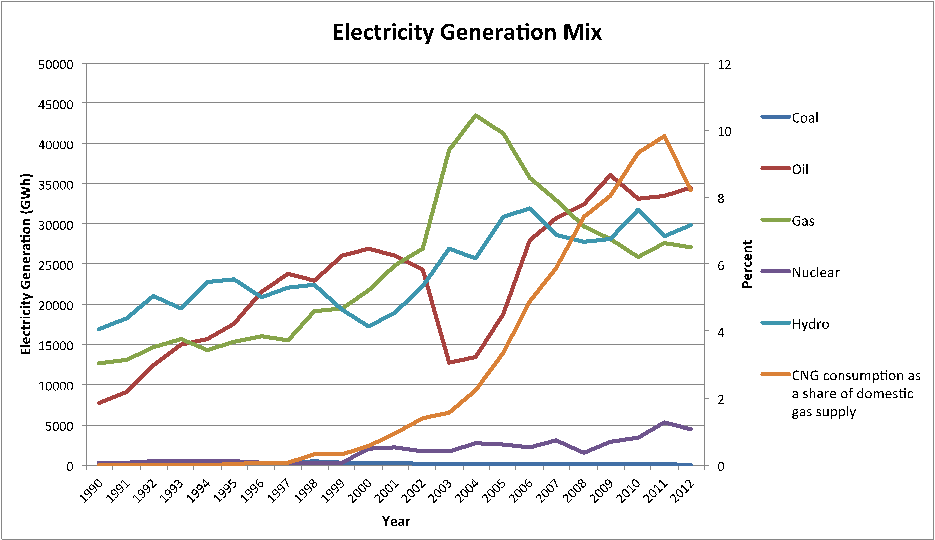 In the case of Russia, although gas subsidies have led to excessive gas consumption, that has not always been its primary worry, much of that consumption has helped its industry to thrive. Naturally, low prices have driven consumption and have seen gas become the preferred fuel for much of industry and power. However, with concerns over the ability of the domestic market to financially sustain future production in the event of diminished exports a rise in prices is also likely. This will certainly see some industry become unsustainable or choose other fuel sources such as coal. Its effect on the residential market may be less noticeable as not only may it be protected from some of the price increases but it has also has many inefficiencies embedded that price will not affect. 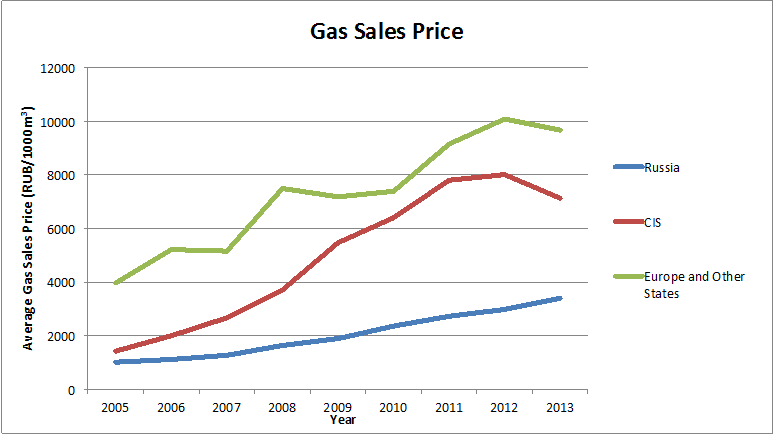 Gas subsidies in countries across the world have undoubtedly led to an increase in consumption in those countries as it becomes not only the fuel of choice in much of industry and power due to the lower price but also becomes wastefully consumed. As countries are becoming more aware of the negative effect of subsidies on their supplies and economies there is a move to reduce them. This in turn will see some demand drop off as other fuels become more competitive with gas and users are more careful of their use due to its costlier nature. This will also result in consumption becoming more elastic as it responds to more typical supply and demand economics.