CEDIGAZ, has released today the sixth edition of its reference report on Underground Gas Storage. This updated edition entitled “The Underground Gas Storage & LNG Storage Market in the World 2015-2035” includes for the first time the coverage of LNG storage activity worldwide. The report includes detailed analyses of the latest developments and trends in the storage industry, CEDIGAZ’s Outlook to 2035 at regional and global levels, and extensive country analyses with complete datasets including current, under construction and planned UGS and LNG facilities for more 49 countries. 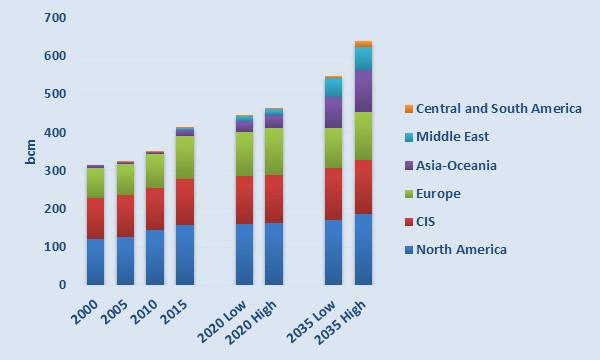 Global UGS capacity is expected to increase from 413 bcm in 2015 to between 547 and 640 bcm in 2035. This wide range reflects the uncertainties surrounding the evolution of global gas markets plus the uncertainties specific to the gas storage business, such as challenging geology or the competition from other sources of flexibility. New storage markets, Asia-Oceania, the Middle East, and potentially Central and South America are expected to drive the growth. Conversely, the growth in working capacity should be limited in mature markets, and could even be negative in the EU. 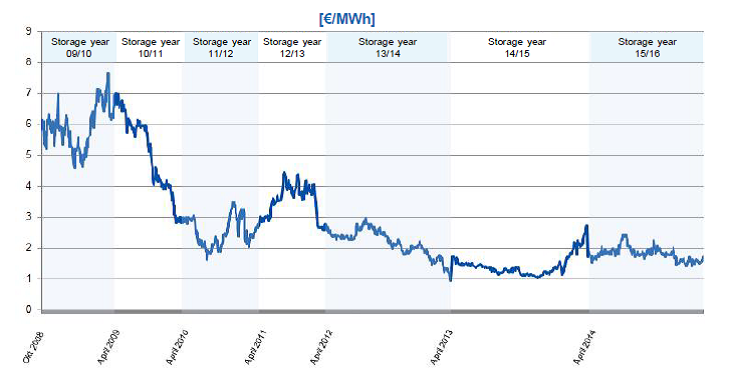 In liberalized markets the traditional roles of gas storage in dealing with seasonal or short-term demand variation, providing security of supply and allowing optimization of the whole gas chain have been expanded to the financial sphere where storage is used for seasonal or short-term price arbitrage. In this context, the seasonal spreads become the main drivers of storage valuation, ignoring the many other values of physical storage. In an increasingly competitive flexibility market, gas storage profitability comes under increasing pressure, especially in Europe. 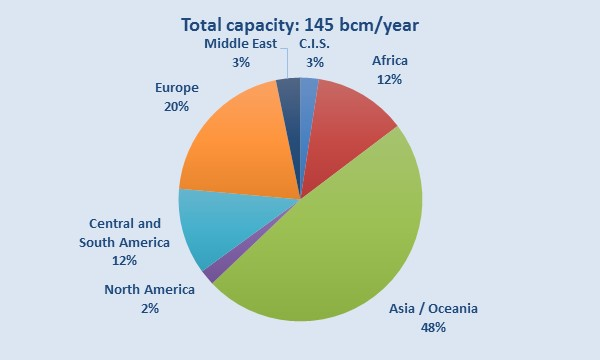 The number of LNG importing countries has grown rapidly over the past ten years, from 18 in 2005 to 35 in 2015. This trend is expected to continue, with 20 new countries planning to import LNG from now to 2025. With lower costs than traditional onshore plants and shorter lead time, FSRUs are playing a central role by facilitating access to the LNG markets for new importers. At the beginning of 2016, 118 LNG import terminals (including 17 FSRUs) and 429 LNG storage tanks existed worldwide, with 16 new terminals under construction, of which four FSRUs and 12 terminals being expanded. In addition, CEDIGAZ has identified more than 100 projects at different stages of planning.