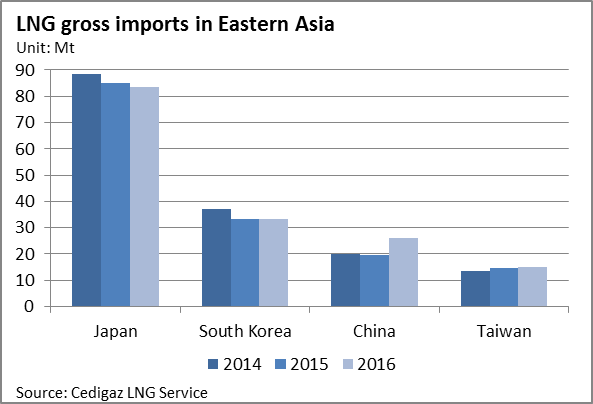 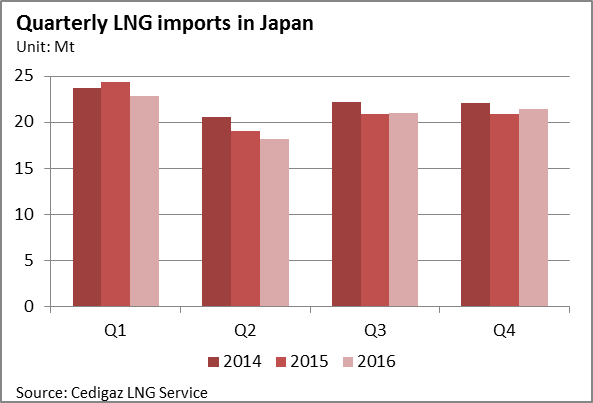 Contributing to around a third of the global LNG demand, Japan is the world’s largest importer of chilled gas. In 2016, the country imported 83.3 Mt, down by 2% from the previous year (85.1 Mt). It was the second consecutive year that imports of Japan decreased.

Specifically, LNG imports decreased by 5.3% during the first half of 2016 before rising by 1.4% in the second semester.

Despite a 2.7% growth of sales in 2016, pulled by a higher gas demand in the industry, several other factors had a negative impact on LNG imports. Firstly, electric power demand decreased by 1.4% to 885,6 TWh. Secondly, LNG demand by the power sector was further curtailed by the growth in nuclear and renewable energy outputs (+292% and +58.7% respectively). The two nuclear reactors of Kyushu (890 MW of capacity each), were restarted in September 2015 and November 2015 and remained operational during most of 2016 – before being shut down for maintenance from October 2016 – while the third nuclear reactor of Shikoku (890 MW of capacity) resumed commercial operations in September 2016. As a result, the electricity generated by nuclear plants in 2016 was almost four times higher in 2016 than in 2015. Finally, warmer temperatures during the first months of the year and the continuation of energy conservation measures reduced demand for heating. 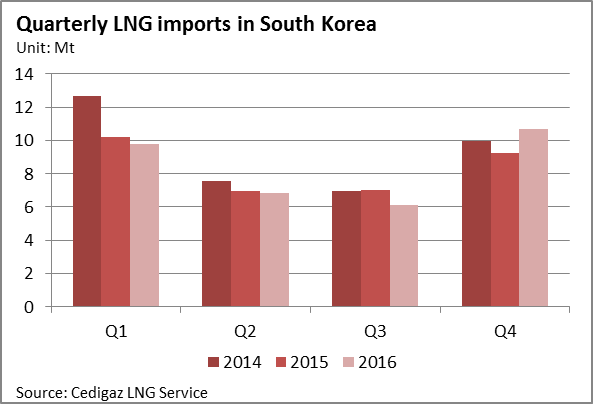 The country has recently made the choice to reduce its dependence on imported fuels by increasing capacity of nuclear in the power sector. As a result, nuclear output increased by 5.7% from Q1 to Q3 while LNG deliveries slumped by 5.8% over the same period.

However, following an earthquake that hit the country in early September 2016, several nuclear plants were shut down for safety assessments. This, combined to lower than average winter temperatures that drove heating demand up led to a 15.7% jump of LNG imports in the fourth quarter. 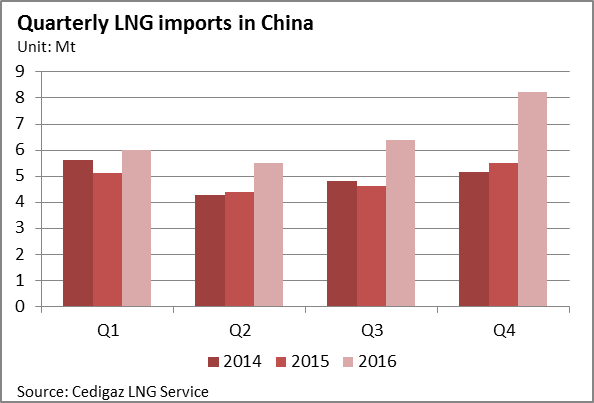 China recorded the world’s most significant rise in LNG imports in 2016. Purchases reached a total of 26.2 Mt, up by 33% compared to 2015. China’s chilled gas imports ramped up throughout the whole year, growing by 17.4% in Q1, 25.7% in Q2, 38% in Q3 and 49% in Q4. This annual trend came in a large part from the sharp rise in deliveries from Australia as the first train of the Australia Pacific LNG (APLNG) terminal came on line in January 2016 and the 7.6 Mt per year supply contract of Sinopec started. As a result, Australia overtook Qatar to become the largest LNG supplier to China (46% of the total imports). 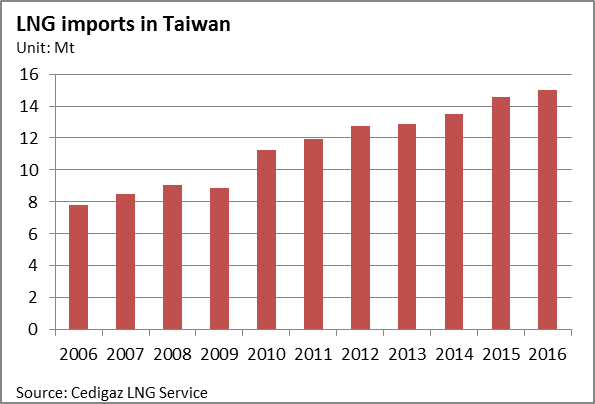 Taiwan imported a total of 15 Mt of LNG in 2016, up by 2.7% year-on-year. For the country, this is the seventh consecutive year of growth. CPC, Taiwan’s sole LNG importer, benefited from term contracts signed with Malaysia, Papua New Guinea, Indonesia and Qatar. It also took more deliveries from Russia which became the country’s fifth largest supplier (8.5% of the total imports). 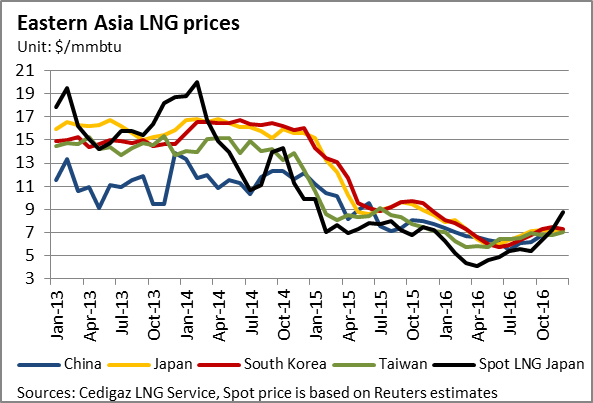 As a consequence of the continuing drop in oil prices, average LNG import prices in Eastern Asia fell for the second consecutive year in 2016, from $9.5/mmbtu in 2015 to $6.7/mmbtu in 2016. Most of the drop occurred in Q2 with LNG prices rising again in the second half of the year in the wake of oil prices.

Spot LNG price in Japan averaged $5.6/mmbtu in 2016, down by $2.0 compared with the previous year. As Japan reduced its imports, prices declined from January to April to reach $4.0/mmbtu, corresponding the lowest level recorded in the recent past years. Then, prices started to rise again, reaching $5.4/mmbtu in Q3 and $7.4/mmbtu in Q4. 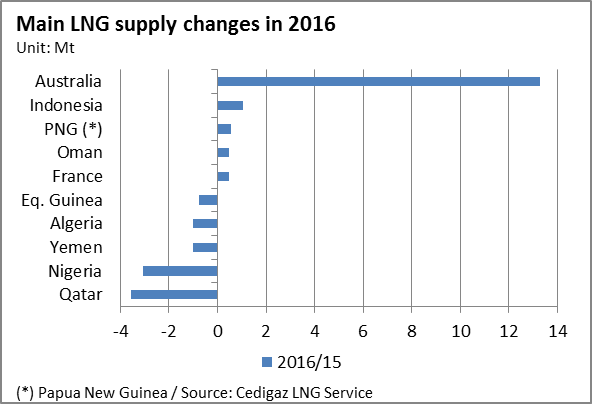 In 2016, numerous projects came on line in Australia including Gorgon LNG (trains 1 and 2), APLNG (trains 1 and 2) and Gladstone LNG (train 2). As a result, Australian deliveries to Eastern Asian countries soared by 13.3 Mt well above from the second biggest rise which came from Indonesia (+1.1 Mt). In the meantime, imports from Qatar dropped by 3.6 Mt, pulled by the collapse of deliveries to Japan (-2.5 Mt), to Taiwan (-0.7 Mt) and to South Korea (-0.5 Mt). Supplies from Nigeria and Yemen also decreased significantly (-3.1 Mt and -1 Mt, respectively) as production fell because of force majeure in both countries.

Amid those changes, two countries came back again on the Eastern Asia’s LNG market: Egypt – which temporary restarted operations and exported two cargoes (to Japan and China) – and Angola – which restarted its production after different stages of maintenance due to a pipeline rupture in 2014 (one vessel to South Korea). 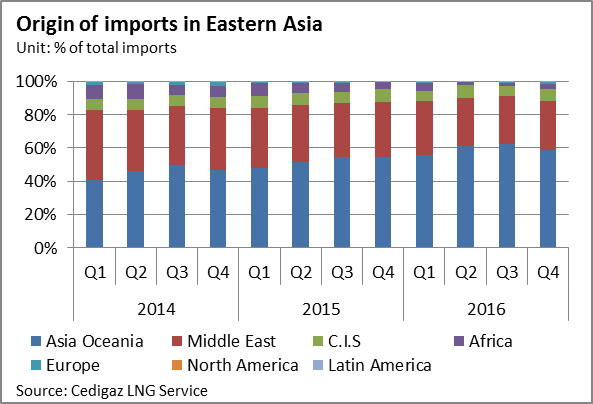 Finally, with a market share of 25.1% over the year, Australia overtook Qatar (22.4%) to become Eastern Asia’s first supplier in 2016 – only one year after having taken Malaysia’ second position.

On a regional scale, Asia Oceania strengthened its position as the first region to supply Eastern Asian countries in 2016. With 59.4% of the total deliveries, the region increased its share by 7.2 points compared to 2015 whereas Middle East and Africa’s market shares decreased by 4 points (to 29.9%) and by 3.2 points (to 2.8%) respectively. Finally, deliveries from Europe remained flat (+0.1 point).