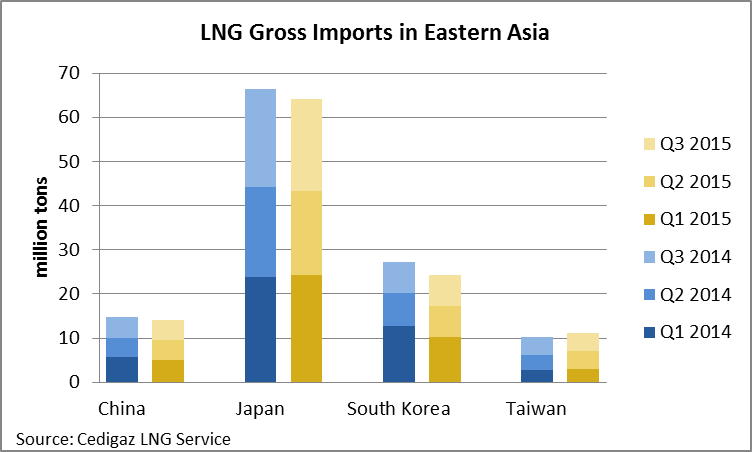 In Q3 2015, LNG gross imports dropped by 4.2 % year-on-year in Eastern Asia. In Japan, South Korea, China and Taiwan, LNG imports declined by 1.6 million tons from 38.1 million tons in Q3 2014 to 36.5 million tons in Q3 2015. In Japan, LNG imports were cut by 5.6% down to 20.9 million tons, as inventories were high and demand from the power sector weaker than a year ago. The latter was explained by lower than average temperatures in July and September, reducing the need for air-conditioning, and the restart of Sendai’s first reactor, even though it accounted for only 0.5% of the electricity generated by the 10 major producers.

In China, LNG imports decreased by 3.5% year-on-year in Q3, from 4.8 million tons in Q3 2014 to 4.6 million tons in Q3 2015. Over the first nine months of the year, LNG imports reached 14.1 million tons compared to 14.7 million tons over the same period last year (-3.7% year-on-year), while imports by pipeline grew to 11.7 bcm (+68.3% year-on-year in the first nine months). While high wholesale gas prices reduced the competitiveness of natural gas in the first half of the year and limited the growth of demand, LNG demand in recent months was affected by uncertainties over these prices, which could be cut by the government soon. Gas distributors seem to have anticipated such a drop and held back stock building to avoid a devaluation of their inventories.

After two quarters of decrease, LNG imports were flat in Q3 2015 in South Korea. The second largest importer in the world received 7 million tons in Q3 2015 against 6.98 million tons in Q3 2014. In August, the country imported 15.6% less LNG than in August 2014, but higher demand during this same month from the power sector caused by above average temperatures contributed to increase imports in September (+13.3% year-on-year).

The drop in LNG average import prices temporary on hold 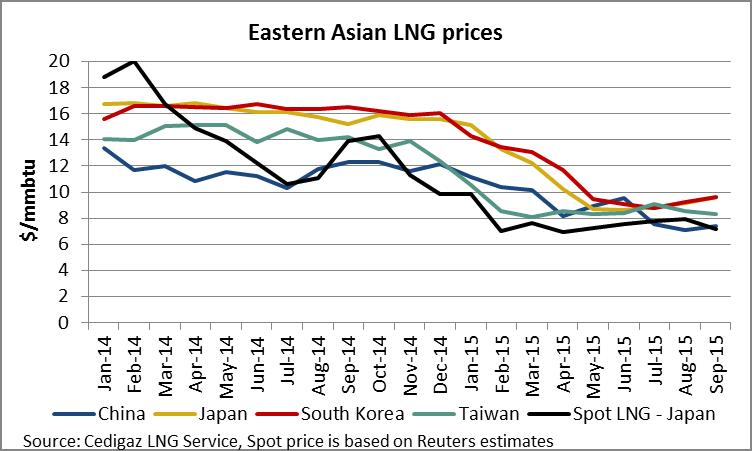 n countries, the continuous drop in LNG prices was somehow put on hold over Q3 2015 as a consequence of the slight rebound in crude oil prices which occurred in May and June. In Japan, where long-term contracts prices are typically indexed on JCC price and include a 3-month lag, average import price grew from $8.61/mmbtu in June to $9.65/mmbtu in September. Similarly, average import price in South Korea grew from $9.11/mmbtu to $9.61 over the same period. In China and Taiwan, the higher share of spot purchases and the use of different prices formula for long-term contracts explain the different trends.

On the spot market, LNG price decreased over the summer. While Japan LNG spot price averaged $7.58/mmbtu in June, it increased in July and August when it peaked at $7.97/mmbtu, its highest level since January 2015. However, low demand in Asia and the ramp-up of new facilities in Australia and Indonesia drove spot prices down to $7.21/mmbtu in September.

Such a trend, which started in 2013, intensified in 2015 as consequence of the ramp up of new regional producers and diminished or diverted production from the Middle East. In the first nine months of 2015, Eastern Asian countries imported 19.1 million tons of LNG from Australia against 17.6 million tons over the same period in 2014 (+8.8%). Similarly, imports from Papua New Guinea reached 5.3 million tons from January to September 2015 (+199.7% year-on-year).