In 2015, LNG imports in Japan, South Korea, China and Taiwan reached a total of 152.8 Mt, which represents a 3.9% decrease compared to 2014 (159 Mt). The drop was steady throughout the year, even though it slowed down in the fourth quarter, when imports decreased by 3.1% year-on-year against a rate of over 4% in the previous quarters. 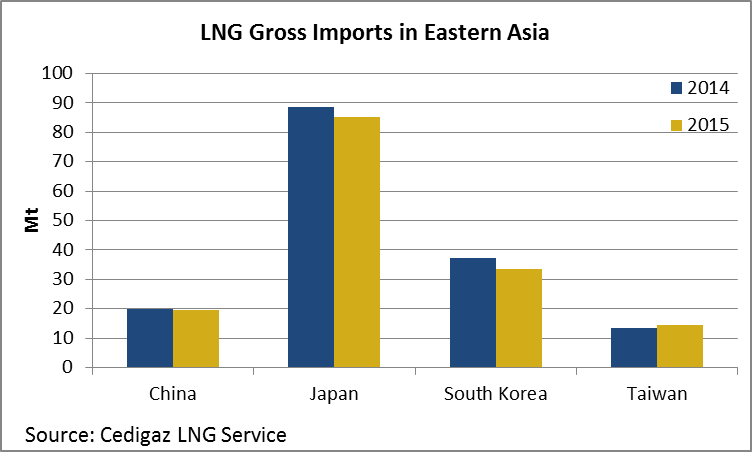 In Japan, which accounts for about a third of the world LNG consumption, imports dropped by 3.9%, from 88.5 Mt in 2014 to 85 Mt in 2015. The bulk of the decline was caused by the drop of LNG use in the power sector: the ten privately-owned electric power companies of Japan, which bought 55.7 Mt of LNG in 2015, reduced their consumption of LNG by 4.8% (-2.7 Mt). On the one hand, this decline is explained by an overall drop in power generation in 2015 (-5.1% to 685 TWh) caused by above than average temperature in the spring and lower than average temperature in June and September, which reduced demand for heating and cooling. On the other hand, the 13.7 % increase of hydro, new energy and nuclear power impacted the use of thermal plants. The electricity generated by thermal plants declined by 6.8% so that besides LNG, consumption of coal, heavy fuel oil and crude oil by power companies decreased by 1.6%, 19.3% and 23.4% respectively. In addition, city gas sales of the top-3 natural gas utilities dropped by 0.9% mostly because of lower consumption in the residential and business sectors.

In South Korea, LNG imports decreased by 9.9% to 33.5 Mt in 2015 against 37.2 Mt in 2014. In the first nine months of the year, consumption of natural gas actually fell by 5.8% y-o-y due to lower demand for power generation (-8.9%) and city gas (-4.8%). Despite the increase of demand for electricity over this period (+2%), LNG demand decreased while coal for power generation grew. The output of nuclear plants also grew by 2.3% in the first nine months of the year while the development of renewables offset the decrease of hydropower. In addition, city gas sales dropped because of the decline in price competitiveness of LNG over heavy fuel, which decreased the industrial demand.

Taiwan was the only country to increase its imports, as LNG deliveries grew by 7.9% from 13.5 Mt to 14.6 Mt. CPC, Taiwan’s sole natural gas importer, took advantage of an attractive contract price formula it negotiated with Rasgas and of the low spot price to increase its unloading from Qatar. LNG use was actually boosted by the decline of other energy supplies: in the first three quarter of the year, supply of nuclear energy dropped by 11.1% y-o-y, while the supply of coal and crude oil declined by 2% and 1.5% respectively. 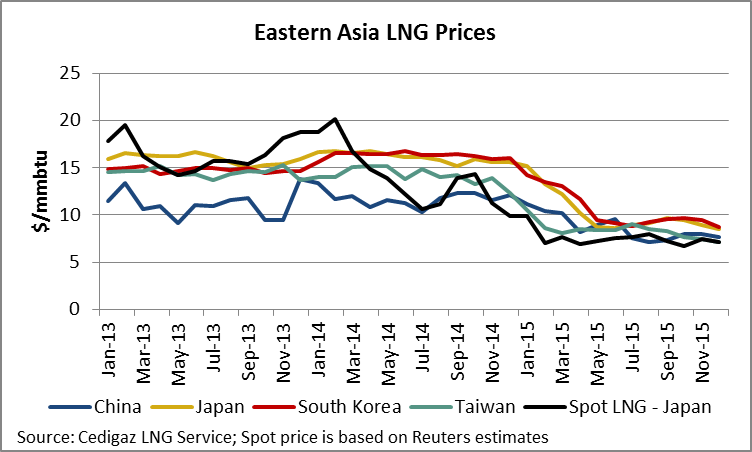 As a consequence of softening market conditions and the drop in oil prices, average imports prices fell in Eastern Asia in 2015. Most of the drop occurred in the first quarter of the year and by May 2015, prices had reached less than $10/mmbtu. Since then, they have remained below this level. It is also worth emphasizing that during the year, the spread between prices in the different countries has decreased significantly, mostly due to the collapse in oil prices.

On the spot market, LNG in Japan averaged $7.5/mmbtu in 2015. After a drop from $9.9/mmbtu in January to $7/mmbtu in February, spot price remained below 8$/mmbtu and reached its lowest point in October, at $6.7/mmbtu. Overall, low demand in Asia and the ramp-up of new facilities in the region contributed to keep spot prices low.

Imports from the Pacific basin on rise by 8.9% 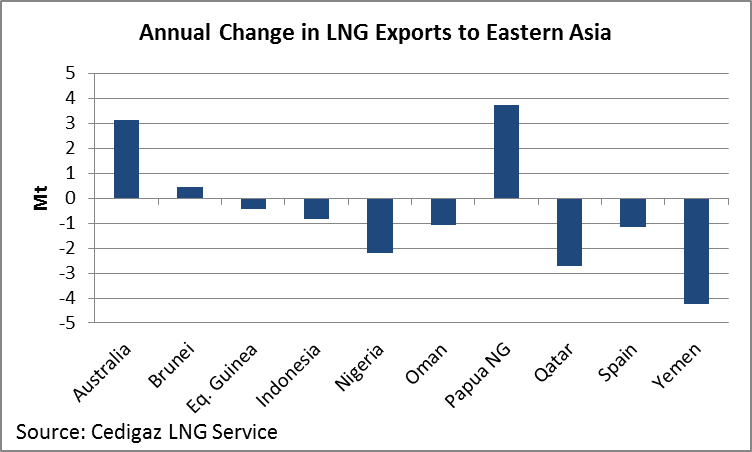 In 2015, the origin of imports changed in Eastern Asia countries: while the share of Asian Oceanian imported LNG increased throughout the year, the share previously held by non-Asian Oceanian producers and re-exporters dropped. Imports from the Pacific basin, which includes producers in Asia Oceania, Alaska, Peru, Russia, as well as reloads from Singapore, India and South Korea, grew by 8.9% from 83.6 Mt to 91 Mt. Intra-regional trade was boosted by the ramp-up of newly commissioned plants in Australia and Papua New Guinea. In 2015, Australia became the largest LNG producer in Asia and exported 26.4 Mt to Eastern Asia countries (+13.5% compared to 2014) and imports from Papua New Guinea reached 7.2 Mt, meaning that the plant ran above its design capacity (6.9 mmtpa).

Meanwhile, imports from other regions significantly decreased for various reasons, including the choice of large portfolio players to divert LNG to more attractive markets. Thus, imports from Nigeria dropped by 26.1% (-2.2Mt) as the country increased its deliveries to Latin America, Europe and new importers in the MENA region. Similarly, imports from Qatar declined by 6.6% (-2.7 Mt), pulled by the collapse of deliveries to China (-28.5%,- 1.9 Mt) and to Japan (-9.2%, -1.5 Mt). Imports from Yemen dwindled by 80.7% (-4.2 Mt) since Yemen LNG declared force majeure in April. Last but not least, the volume of LNG reloaded in Europe and delivered in Eastern Asia collapsed by 72.3% (-1.5 Mt) as a consequence of the drop of the price difference between the two markets.