In Southern Europe, net LNG imports were down 8.7% to 12.1 MT, as imports in France, Spain and Italy declined. LNG imports in Spain declined by 12 % (-0.65 MT), counterbalanced by pipeline imports from Algeria which grew 18% compared to last year. Spanish LNG imports from Peru were down by 0.88 MT and this was partially offset by increased purchases from Trinidad and Tobago (+0.67 MT). In France, re-exported volumes surged by 0.72MT YoY, resulting in a 10% decline (-0.4 MT) in net LNG imports. The re-exported cargoes from France landed mainly in Asia (China, South Korea, India) and the Middle East (Kuwait). In Italy, LNG imports were down by 10% (-0.28 MT) as the power sector gas demand weakened in H1 2018, while hydroelectric power generation increased. Portugal was the only Southern European country where LNG imports were up, albeit marginally (+ 0.15 MT).

In Northwest Europe, net LNG imports were down 19% to 2.82 MT as net imports in the UK and the Netherlands decreased by 0.74MT and 0.33 MT. In the UK, imports from Qatar were down substantially (-1.4 MT) as many cargoes from Qatar were diverted into the premium Asian market. China, which continued to lead Asian LNG demand growth, increased imports from Qatar by 39%. As LNG imports declined, the UK imported more natural gas via the Interconnector as domestic demand increased in the first months of the year, driven by heating needs. LNG imports in the Netherlands were down on account of higher re-exports (+0.3 MT). The re-exported cargoes from the Netherlands went to Japan, South Korea, India and Pakistan.

In central Europe, Poland increased net LNG imports in H1 2018 by 0.33 MT to 0.95 MT as supply from Qatar increased following a supplementary deal signed with Qatargas in 2017, which came into effect in 2018. 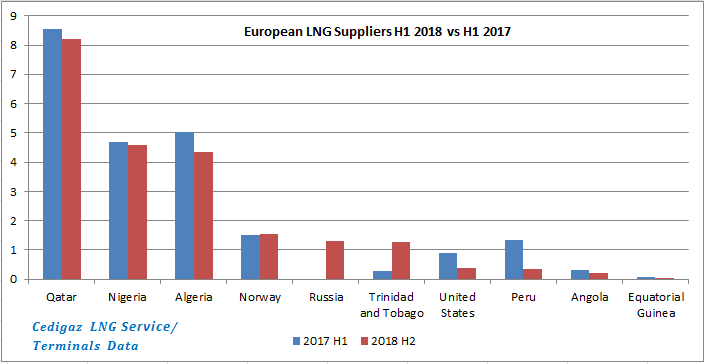 The top three LNG suppliers to Europe remained unchanged from last year, i.e. Qatar, Nigeria and Algeria. However their combined export volumes dropped 6% (-1MT YoY). Russia emerged as a new LNG supplier in Europe as the Yamal LNG project started operations in December 2017. There was a significant decline (-1MT YoY) in LNG deliveries from Peru, which was nearly offset by a gain from Trinidad & Tobago. US LNG exports to Europe plummeted by 0.5 MT as the US exported most (62%) of its LNG to Asia where US exports went up by nearly 3MT.

Re-exports which were nearly dormant last year have picked up in H1 2018 as higher LNG prices have created arbitrage opportunities for European Importers, which re-exported mainly to the Asian region. European LNG demand for the second half of this year will depend on a number of factors, including but not limited to, power sector gas demand, the weather, energy prices and competitiveness of LNG versus pipeline imports.