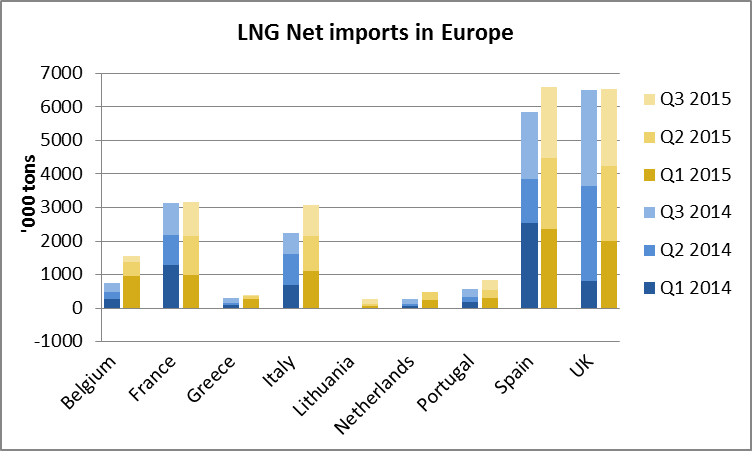 The decrease in LNG net imports was driven by countries which had boosted Europe’s imports in the first half of 2015, i.e. Belgium, the Netherlands and the United Kingdom. Overall, net imports decreased by 25.1% in these three countries from 3.2 million tons in in Q3 2014 to 2.4 million tons in Q3 2015. The Netherlands were actually net exporters in Q3 with reloads above imports.

Qatar, which used the liquidity of the Northwestern Europe gas market to sell its output at the time of low Asian prices, seems to have somehow pulled back: the country exported only 4.1 million tons of LNG to Europe in Q3 2015 against 4.8 million tons in Q3 2014 (-14.2%). Instead of oversupplying Asia and Europe, where it sold its LNG in a range of $5.4-$6.7/mmbtu on average in July 2015, Qatar (through trading houses) diverted its gas to Latin America, Egypt, Pakistan and Jordan. The latter three, which started operating in 2015, received about 0.8 million tons of LNG from Qatar in Q3.

From July to September, the north 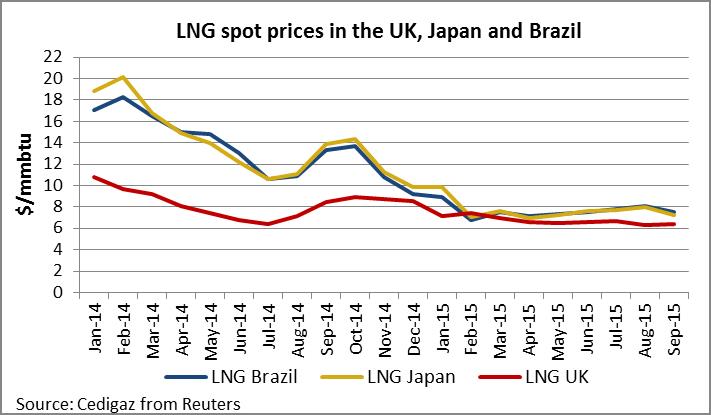 west Europe LNG spot price averaged $6.5/mmbtu, its lowest point since Reuters’ assessments started in 2012. With the Asian spot price standing at $7.57/mmbtu on average, the Asian premium was down to $1.07/mmbtu: considering that it costs about $1/mmbtu to transport LNG to Asia and about $0.6-$1/mmbtu to reload a cargo in Spain, the economics of the business are not as attractive as they were a year ago.

In the meantime, Netherlands’ Gate LNG terminal performed 5 large-scale reloads. Cargoes were delivered to Egypt, Jordan, India and South Korea. As for the latter, customs data show that it was sold at a price of $9.06/mmbtu (including transportation costs) meaning that the net margin of the reload was probably in a $0.5-1.5/mmbtu range.

Overall, LNG net imports are likely to grow in 2015 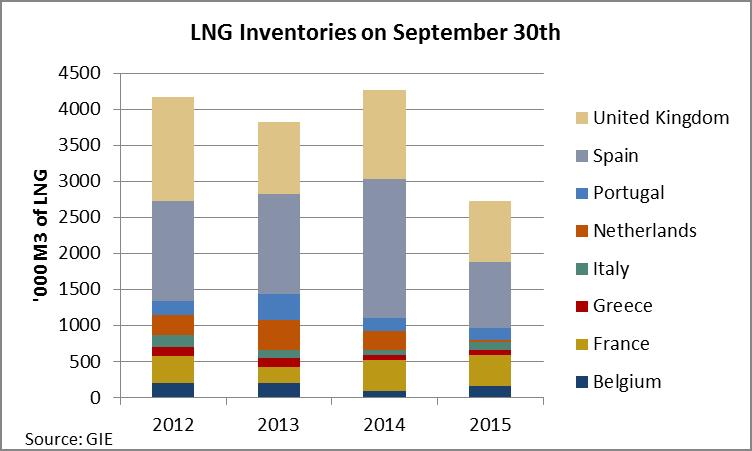 Despite decreasing volumes in Q3, European LNG net imports are expected to grow in 2015. In addition to increased deliveries in the first half of the year (net imports grew by 28.2% year-on-year in H1 2015), Q4 2015 could also see a slight growth. Even though natural gas consumption could be limited by above than average temperatures as a consequence of the El Niño phenomenon, companies will have to replenish LNG inventories which were very low at the end of Q3.

European LNG stocks stood at 2.7 Mcm of LNG on September 30th, 2015 against 4.3 Mcm a year before (-36.1%). In particular, one can expect Spanish LNG imports to grow year-on-year in Q4 as stocks were 52% lower than a year before and have never been this low at the end of Q3 in the last three years. Similarly, low inventories in the United Kingdom would favor LNG imports growth all the more as British Islands temperatures are not expected to be affected by El Niño.

Disclaimer: in this post, the analysis is based on terminals and shipping data. Figures may defer from previous analysis based on customs data. Europe refers to EU countries and does not include Turkey.