Follow @Cedigaz_SGHome » Blog » With the first deliveries of Liquefied Natural Gas (LNG) from the US, let’s take a look at the fast changing energy landscape

US shale gas: the first of five revolutions at the beginning of the XXI century

Three revolutions on the supply side: US shale gas, US shale oil and worldwide renewable

The US shale gas revolution is only the first (and most documented) of three revolutions that happened since the beginning of this century on the supply side. The world has changed thanks to the US shale revolutions (gas first and then oil) and a global quest for renewable. Those revolutions took over a decade but will shape the XXI century. Australia followed producing unconventional gas and is now also exporting it. It should take some time for unconventional oil and gas production to materialize in other places where the resource is available[1] (Argentina, Canada, China, Mexico, Russia, South Africa, etc.) but the US shale revolutions should be exported in a few other countries.

Renewable policies were first designed in Europe (mostly based on subsidies as renewable then was much more expensive than any other form of energy) from 2001[2] to reduce CO2 emissions but, China is now also investing heavily as it needs clean energy to reduce air pollution in its big cities. The three biggest renewable producers in 2014 were: EU, US and China. In 2014, China was the second producer of solar energy behind the EU[3] but from 2016 it should become the biggest single solar producer (still behind the EU but before Germany, the biggest contributor to EU solar energy).Thanks to technological improvements, renewable cost has gone down massively and can now compete with traditional electricity production (fossil fuels or nuclear). It can spread all over the world as it is no longer a fancy idea for only rich countries with an ecological mindset[4]. In the 2004-2014 period, on a worldwide basis, renewable production grew by an astonishing 15%pa when total primary consumption grew only by 2%pa. If we assume those trends to continue, renewable should be the first contributor to the world primary energy mix by 2035. 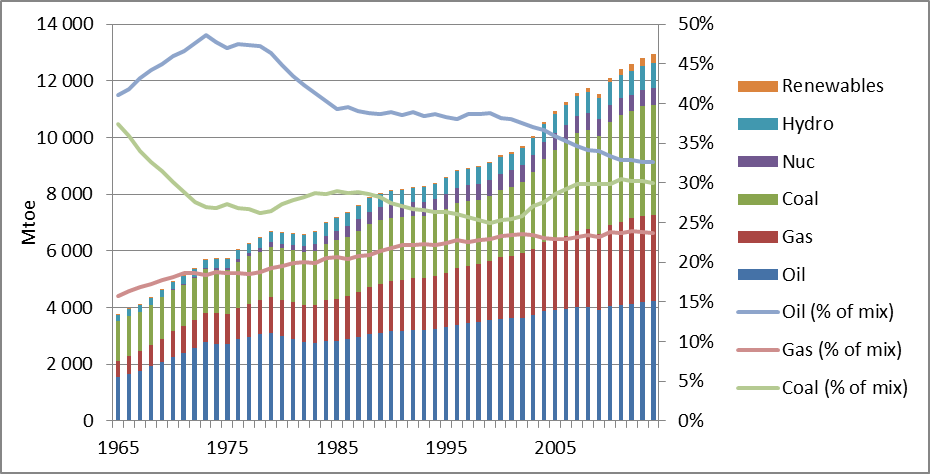 On the demand side, efficiency gains: an on-going revolution

More energy has always been needed to sustain economic growth. Energy provided first by slaves in Ancient Egypt, Greece or the Roman Empire then by coal for steam machines during the Industrial Revolution in Europe and finally by oil during the XX century on a worldwide level. But for the first time ever, since 2006 (before the financial crisis), the European economy has been able to growth with less energy. This decoupling between economic and energy demand is now a European reality. 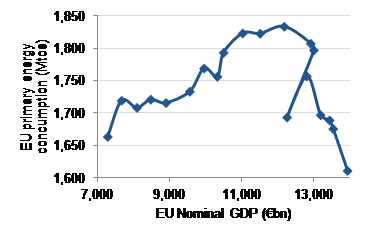 Not only have we seen during the last decade, like in the 70’s, a demand destruction in front of higher prices (especially in Europe) but most policies are aimed at improving energy efficiency in the long run to avoid burning fossil fuels that has a negative impact on climate change. Europe is now definitively past its peak energy demand and could be followed by other developed states in the coming decade.This new trend is going to continue in Europe with the 2030 EU climate and energy roadmap. On top, the outcome of the Paris COP 21 in December 2015 is putting further pressure at the world level on all fossil fuels (and in particular coal) that emits CO2. The secular correlation between economic growth and energy was disrupted in Europe in 2006 and this is going to spread all over the world (from developed to developing countries) in the coming decades. Even China is more energy efficient (it uses less energy per unit of GDP) in the past few years… So the past growth of worldwide primary energy consumption (2%pa in 2004-2014) should slow down in the future, making renewable the biggest contributor to world primary energy mix before 2035.

The power of the OPEC Cartel on oil markets has disappeared in 2014/2015 thanks to those four revolutions (US shale gas and oil, renewable and energy efficiencies) and is unlikely to resume any time soon…

Energy storage: the next revolution

We are witnessing an energy system where not only supply is widely available and demand is bound to peak, but also some major technological breakthroughs on energy storage should materialize soon. This could completely alter the energy landscape where major companies were dealing with massive inflexible infrastructures (coal extraction, hydrocarbon production, nuclear plants, etc.). The future could look like a decentralized smart system where end-users select the kind of local energy they have (wind, hydro, solar), are able to store it and to use it when needed. The intermittency of renewables that was a major obstacle in a centralized electricity transmission system should be solved with new batteries and new storage solutions (power-to-gas, molten salts, etc.). This should allow the share of renewable to continue to grow and to overtake fossil fuel around 2050.

It is interesting to note that two of those revolutions started in the US (shale gas and shale oil), two in Europe (renewable quest and energy efficiency). The on-going fight to achieve the cheapest and most efficient energy storage is global with high prize at stake as this could be the silver bullet to achieve a completely green energy supply. Companies and states are investing heavily to solve this problem and already new products like home batteries are appearing on the market. Like renewable in the early 2000’s, batteries will be very costly to start with, but cost should go down thanks to Research & Development. Finally, the manufacturing process should reduce the cost of batteries that would then be disseminated in all houses. With financial markets turning their back on coal that faces strong policy headwinds (for climate change risks) and limiting their exposure to oil, vast sums of money are available for those new technologies. The penetration of this dual technology (renewable & storage) could be as fast as mobile phones that leapfrogged landline phones especially in developing countries. This next revolution is just round the corner and will disrupt completely the energy landscape. Don’t wait for 2035 for a new energy system, it’s on its way and should appear around 2025!

Author of the book “After the US shale gas revolution”

[4] In Denmark, renewable accounted for 24% of the total primary energy consumption vs. 2% in China (BP Statistical Review – June 2015)