Today, Southeast Asia is again in front of great changes in its energy mix. To meet surging demand, the region must secure a reliable and affordable energy supply. It must also limit the environmental pressures associated with energy consumption. The power sector is fundamental to these changes. Driven by rapid economic growth, demographic and urbanization trends, and the extension of access to modern electricity to larger segments of rural populations, electricity demand is expected to almost triple by 2040.

While natural gas still dominates the regional electricity mix, a shift to coal has been observed since the end of the 2000s driven by the availability of coal in the region and its lower cost than competing fuels. In the short to medium term, this trend is going to continue: there are around 35 GW of coal-based capacity under construction in the region, most of them to be completed by  2020. In addition, there is a huge number of permitted and announced coal-fired power plants in the pipeline, which means that the dominance of coal may continue well after 2020. In the World Energy Outlook 2016 of the International Energy Agency (New Policies Scenario), coal becomes the first source of electricity generation by 2040, despite the increase in electricity generation from renewables. In contrast, the contribution of gas to electricity generation falls by 2040.

However, across Southeast Asian countries, there is increasing political will to implement policies aimed at meeting electricity needs in a more sustainable manner. The ASEAN Vision 2025 promotes green development by developing a sustainable growth agenda that promotes the use of clean energy and related technologies, as well as enhances sustainable consumption and production. To address the challenges of rising energy needs and environmental concerns, the ASEAN community targets a reduction of its energy intensity by 20% in 2020 and 30% in 2025, based on the 2005 level, and aspires to achieve 23% of renewables in its energy mix by 2025.

Despite the rapid increase in renewables, in the short and medium term, most of the growth in power generation will be based on coal and natural gas. Thus, coal and natural gas are largely in competition for most baseload and load-following power generation throughout the region. While coal dominates capacity additions until 2020, six main factors may alter the fuel competition in favour of gas.

Trends in coal and gas prices have diverged in 2016. Natural gas prices have continued to fall due to ample availability of LNG supplies and lower oil prices. In contrast, steam coal prices have almost doubled in 2016 due to an unexpected and sudden increase in Chinese coal imports that has tightened the global coal market. Under these new conditions, the gas-coal competition in the power sector is less favourable to coal. 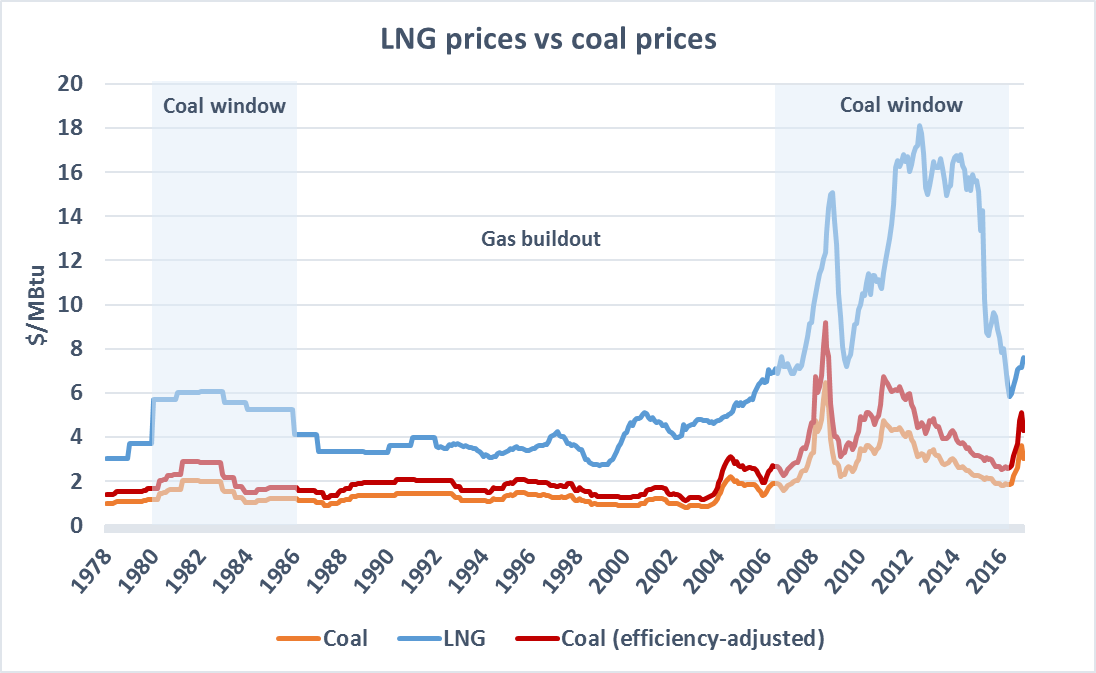 A window of opportunity seems to be opening for gas. While the power mix was expected to continue its shift to coal in the medium and long term, the gas option is reconsidered in view of lower prices and ample availability of LNG.Several ASEAN countries have started to import LNG to secure and diversify their gas supply and a growing number of new import terminals are under consideration in the region. The gas-coal competition is becoming increasingly affected by government policies on the environment. The environmental cost of fuel combustion makes coal less attractive, as coal-fired power plants emit twice as much CO2 than gas-fired power plants. In addition, gas-fired power plants greatly reduce emissions of local pollutants like sulphur dioxide and nitrogen oxides. Social opposition to new coal power plants over concerns on air pollution is growing in the region, and several coal projects have been delayed or cancelled due to strong local opposition. Financial restrictions on coal projects by international financial institutions and the global campaign against coal – if they don’t stopped financing of coal plants in the region – make the funding of coal projects more difficult and longer and favour other sources, including natural gas. Finally, the rapid development of renewables in the region will reduce the need for additional thermal capacity. The rising contribution of variable renewables to the power mix will require more flexibility in the power system. Gas is ideal to cover these flexibility needs, with other measures, such as the better integration of the power grid, pursued under the ASEAN Power Grid project.

These factors will erode the reliance on coal in favour of natural gas and renewables. The Paris Climate Agreement seems to have already taken its toll on future coal power building in the region. In the wake of the Agreement, Southeast Asian governments have started to reassess their power development plans to reduce their greenhouse gas emissions and move to a greener economy. The analysis of the most recent national power development plans in the region shows that a change is slowly occurring in favour of natural gas, and above all renewables, and towards less coal. While coal still dominates targeted additional capacity to 2025, the gas option has been revised upwards in most plans, while additional coal capacities have been revised downward.Overall, gas demand by the power sector can be expected to increase more rapidly than currently projected and gas to continue to play a growing role in the energy mix of the region. As gas demand increases, while at the same time regional production is stagnating, LNG has become the natural choice to address the shortfall between gas supply and demand. The increasing import needs of the region could transform it from a nascent LNG importer into a major actor, the third one behind Japan and China by 2030. LNG could offer a more secure and cleaner energy future for Southeast Asia, provided LNG remains competitive and more flexibility is allowed in LNG contract.

The right government policies will be critical to enhancing the use of gas, strengthening gas access and the security of gas supply in the region. The Trans ASEAN Gas Pipeline (TAGP) project addresses these issues. Its scope has been extended beyond physical connectivity and pipelines and includes regasification terminals with a focus on LNG cooperation and strategic buffer management. The strategic re-orientation of the project will make it easier and more secure to trade gas/LNG within the region. To strengthen gas supply security, ASEAN countries must also encourage the development of their gas resources, which requires stable and clear rules for exploration and production. Expanding the midstream and downstream gas infrastructure will require both a significant amount of investment and close cooperation between stakeholders all along the gas chain. A brighter outlook for gas remains very much dependent on the establishment of a clear and stable regulatory framework for investments, enabling the region’s gas and power infrastructure development.