According to a new report by CEDIGAZ, the International Centre for Natural Gas Information, gas has lost its attractiveness against coal in the EU power sector. Its demand by the sector decreased by one third during the past three years and its prospects are very weak in this decade. The Association warns that unprofitability of CCGTs and the retirement of old coal plants due to stringent air regulation may lead to the closure of one third of the current fleet and poses a serious security of supply issue that has to be addressed urgently.

The European paradox: despite the numerous advantages of gas over coal, the evolution of gas, coal and CO2 prices dictates a preference for coal 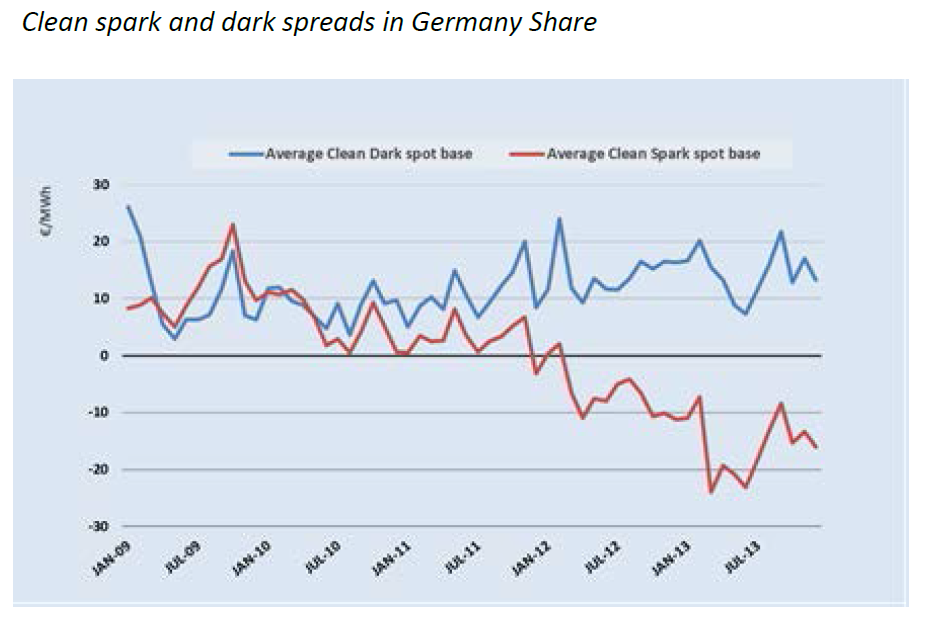 A confluence of factors – including flat electricity demand, the fast development of renewable energy sources (RES), falling wholesale electricity prices, high gas prices relative to coal and low CO2 prices – has eroded the competitiveness of natural gas in the EU power sector. Gas demand lost 51 billion cubic meters in the past three years, the equivalent of the total annual demand on the French gas market. By contrast, coal-fired power stations operated at high loads, increasing coal demand by the sector by 10% between 2010 and 2012.
The relationship between coal, gas and CO2 prices is a key determinant of fuel switching and will remain so. A supply glut on the international coal market (partly because of an inflow of US coal displaced by shale gas) has led to a sharp decline in coal prices while gas prices, still linked to oil prices to a significant degree, increased by 42% between 2010 and 2013. The recent fall in gas prices (a decline of 29% for European spot prices in the first four months of 2014) does not fundamentally change the situation. As coal prices have also declined, coal is currently three times cheaper than natural gas on an energy equivalence basis. With a weak carbon price, coal is preferred to natural gas. Our analysis of future trends in coal, gas and CO2 prices suggests that coal competitive advantage may well persist into the coming decade unless structural reforms of the EU ETS allow an increase of CO2 prices.
National policies also play a key role in shaping the competition between gas and coal. The three largest EU coal consuming countries – Germany, Poland and the United Kingdom – have mixed approaches on the role of coal in their electricity mix. The analysis of their national energy policies clearly shows that the path to a low carbon economy can be achieved differently and at a different pace according to national specificities and trade-offs between the objectives of sustainability, competitiveness and security of supply. Countries with domestic reserves view coal as a means of increasing their security of energy supply especially in light of the current Russia-Ukraine crisis.

RES push out fossil fuel from the merit order

The fast deployment of wind and solar displaces peak and mid-merit conventional power plants out of the merit order for power production and contributes to a fall in wholesale electricity prices. Gas-fired power plants, which have high marginal costs were hit first. In Germany, the average load factor of gas-fired power plants declined to 21% in 2013. In Spain, it went down to just 11% this same year. Due to unfavourable economic conditions, 25 GW of EU’s gas-fired capacity were idled, closed or at risk of closure at the end of 2013. A further 25 GW are currently at risk of suffering the same fate. Overall, almost 30% of EU’s gas-fired capacity may be closed or mothballed by 2015/2016. While coal plants have been operated at high loads so far, RES development is starting to impact hard coal. In 2013, EU coal demand decreased by an estimated 5%. Moreover, EU regulation on emissions of local pollutants – the Large Combustion Plant Directive (LCPD), and its successor, the Industrial Emissions Directive (IED) – may lead to the retirement of an estimated 65 to 70 GW of old coal power capacity by 2020/2023 at the latest.
Altogether a capacity of 115-120 GW, representing a third of gas and coal capacity in the EU, is closing or at risk of closure, posing a serious challenge for security of supply as fossil-fuelled power generation is needed to back-up intermittent RES. The building of flexible power capacity is threatened by the lack of market signals and adverse investment environment. This situation has the potential to unfold into a major structural crisis and must be addressed urgently.
To restore confidence in the market and allow investment in fossil-fuelled generation, a new market design is required. To address the immediate security of supply concerns, several EU countries are introducing capacity markets. If these mechanisms do answer to the immediate concern (keeping the lights on), a more profound reform of the entire power system will nevertheless be necessary, including structural reform of the EU ETS, integration of RES into the market, and completion of the Internal Electricity and Gas Markets.

Reinventing a business case for gas

In the absence of a carbon price signal, a resurgence of gas demand in the EU electricity mix is not foreseen during this decade. Three main conditions are needed to reverse this situation and allow clean and flexible natural gas to play its role as an enabler of the transition to a low carbon economy:
• Reform of the EU ETS leading to a CO2 price incentivising decarbonisation of the power sector
• Lower gas prices through increased gas-on-gas competition, partnerships between gas suppliers and utilities and new pricing arrangements
• Addressing the “missing money problem” to restore confidence in gas-fired generation market and allow much needed investments