The global LNG trade in Q1 2018 sustained the growth momentum which was seen in 2017 as total LNG net imports grew by 9.6% (+6.89 MT YoY) to reach 78.7 MT. This strong growth was bolstered mainly by China (+4.83 MT YoY) and South Korea (+1.60 MT YoY) in North East Asia as well as India (+ 1.36 MT YoY) in South Asia. Bangladesh will also add to the regional demand marginally in 2018 as it started importing LNG in April this year. The Q1 2018 growth in China (+62% YoY) which resulted from coal to gas switching is adequate to maintain a 13% annual growth in 2018 even if the April-Dec’18 demand in China holds flat compared to the year earlier. South Korea surpassed China marginally in Q1 2018 in terms of net LNG imports. Domestic gas demand from the power sector in South Korea surged as 12 nuclear power units were offline. In India, LNG imports grew as a result of higher gas demand from the fertilizer sector and city gas distribution.

In the Middle East, LNG imports declined marginally by 0.05 MT while in Africa it declined more strongly due to much lower imports in Egypt (-1.04 MT YoY) as domestic natural gas production ramped up. In Europe, net LNG imports dropped by -1.34 MT YoY as imports in Spain (-0.52 YoY) and the UK (-0.67 YoY) declined. The decline in Spain resulted from a 5% YoY drop in gas demand from the power sector. A sharp increase of +0.9 MT in European re-exports mainly from France (+0.63 MT YoY) also contributed to the decline of regional net LNG imports. 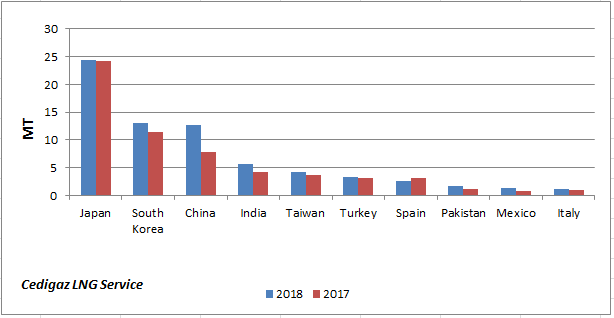 In Australia, Train 1 of the Wheatstone LNG plant started in Q4’17 and Train 3 of the Gorgon LNG ramped up, since it started production in Q1 2017, contributing to the additional supply in Q1’18. In the US, the start-up of Sabine Pass LNG’s Train 4 in Q4’17 and the ramp up of Train 3 led to a surge in Q1’2018 exports. The 25% growth in Russian LNG exports was due to the ramp up of Yamal LNG Train 1, which started operation in December 2017.

In Asia, LNG exports from Papua New Guinea fell sharply by 0.5 MT (-26% YoY) in Q1 as the plant was shut for maintenance after a major earthquake in February. It re-started operations in mid-April, following a six week maintenance.

The African region also added +1.0 MT to the global Q1 supply growth, thanks to increased output from Nigeria (+0.68 MT YoY) and Angola (+0.42 MT YoY). The output from the Chevron operated Angola LNG plant has improved on account of reliability enhancements and it has the potential to operate close to its nameplate capacity of 5.2 MT in 2018. In Nigeria, the exported volume improved as the plant operated at nameplate capacity unlike in Q1 2017.

In the MENA region, exports from Algeria declined as the Skikda LNG plant was shut in March and April for maintenance.

In South and Central America, output from the Atlantic LNG plant in Trinidad and Tobago, which has tumbled since 2014, posted a growth of +0.5 MT YoY, as the feed gas supply to the plant increased due to the start-up of the Juniper field. 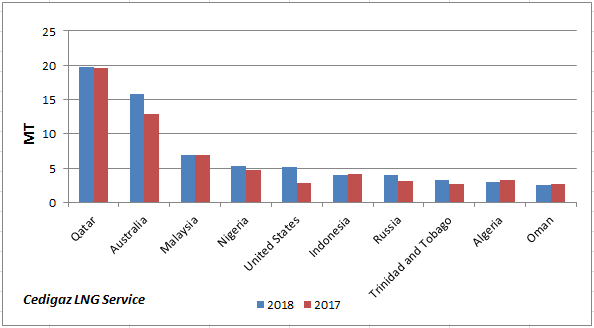 Cedigaz (International Center for Natural Gas Information) is an international association with members all over the world, created in 1961 by a group of international gas companies and IFP Energies nouvelles (IFPEN). Dedicated to natural gas information, CEDIGAZ collects and analyses worldwide economic information on natural gas and LNG in an exhaustive and critical way.