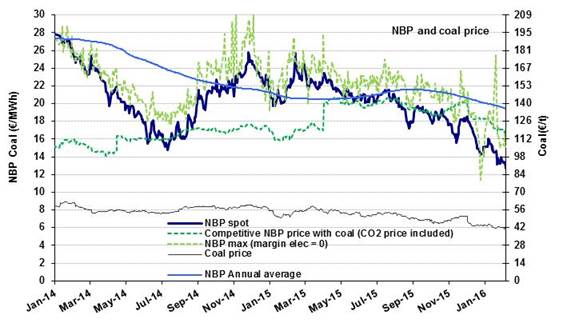 The price decreases observed are due to the plentiful supply on the markets. On the oil market, Iran’s gradual return has a downward effect on the oil price. On the LNG market, the latest forecasts by Japan’s IEEJ indicate that consumption may fall 6% in 2016, after slipping 4% in 2015. This is due to the restart of nuclear power production and to the fact that renewable energies are gaining ground. The impact on LNG imports is fairly sizeable: estimated volumes stand at 78 Mt as opposed to 85 Mt in 2015 and around 88 Mt from 2012 to 2014. 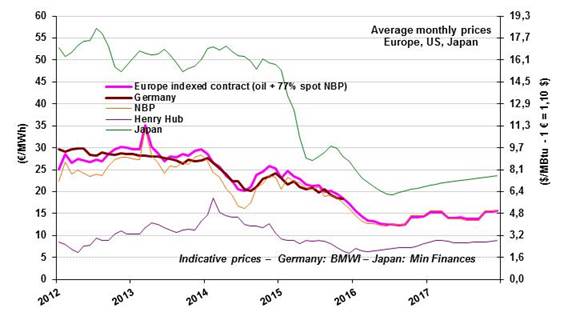 In January, the indicative European price (LT 77%) stood at €15.7/MWh ($5.0/MBtu), down by 9% in a month and by 32% in a year. The LT price could continue to descend and reach €12.4/MWh ($4.1/MBtu) by next July, if current trends persist, especially for the Brent, now quoting at $36/b for 2016 compared to $47/b at the beginning of December. Various factors are weighing on this market, including the magnitude of the drop-off in U.S. production, the level of Iranian exports, the increase in demand and the U.S. dollar exchange rate. The latter has recently weakened due to uncertainties relative to the U.S. economy, a factor that usually tends to push the oil price up.

The U.S. market (Henry Hub): up in January, but prices remain quite low 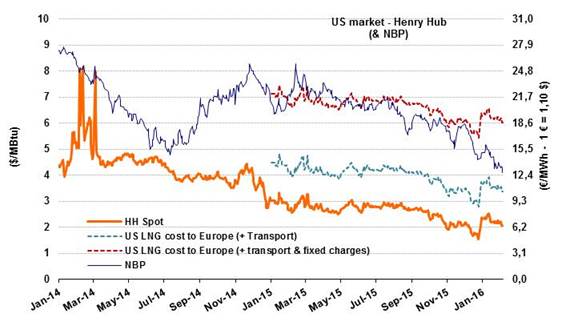