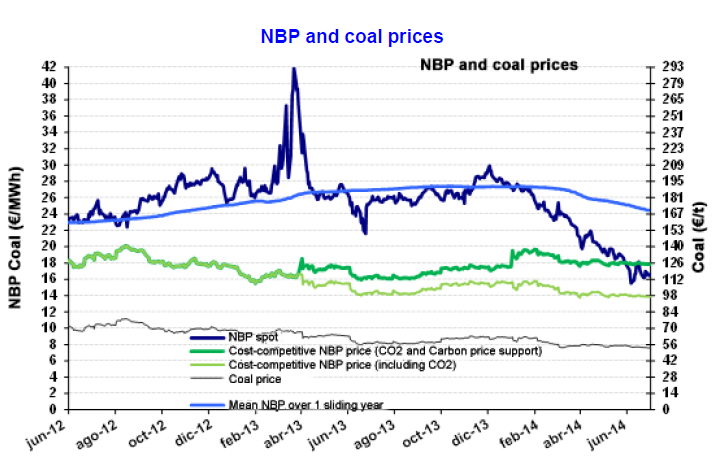 This situation will result in a gradual recovery in gas consumption in the electricity sector, which is currently extremely low (consumption has been halved in three years in the UK). This probable increase in demand should help stabilise the price of NBP, or even push it slightly up. The market is currently banking on prices starting to increase in October to €20/MWh (US$8/MBtu), and then to around €25/MWh (US$10.3/MBtu) by the winter.

It is also worth pointing out that the CPS will have practically doubled by April 2015 (set at £18/TCO2). This means that the price of NBP, which is cost-competitive compared with coal, will be higher – at around €21/MWh (US$8.4/MBtu). It would therefore appear that the current fall in NBP spot prices is exceptional… 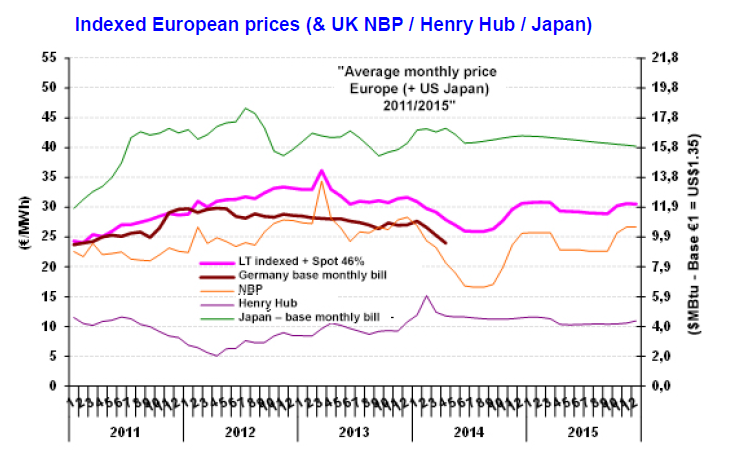 The European estimated price (mixed oil and spot market indexing at 46%) stood at €26/MWh (US$10.4/MBtu) in June, down by more than 3% on the previous month. Since December 2013, this price has fallen by a total of 18%, driven downwards by the 40% fall in NBP prices over the same period.

The last known average price for Germany was €24/MWh (US$9.7/MBtu) in April. This average import price is still noticeably lower than the indexed price, meaning that the weight of the spot market in German contracts is higher on average. It can be put at between 75 and 80%, as opposed to 46% for the

European guide price (46% is the proportion that has currently been selected for France). 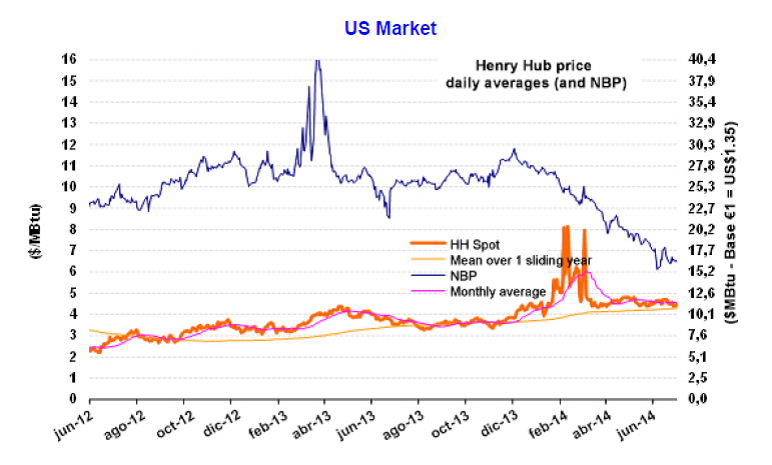 The average HH price has been relatively stable since April, at a monthly average of around US$4.6/MBtu. Volatility is also relatively low, with variations of +/-US$0.2/MBtu. Futures trading is anticipating a slightly lower price of US$4.4/4.5/MBtu until March, then US$4/4.2 thereafter. These predictions are based on gas stocks. The EIA’s latest forecasts show that stock levels at the start of the winter (97 Gm3) will be slightly lower than in the past (105 to 110 Gm3 in October). Variation is, however, modest – it only represents 1.4% of the record production expected for 2014 (714 Gm3 + 110 Gm3 in 4 years!).