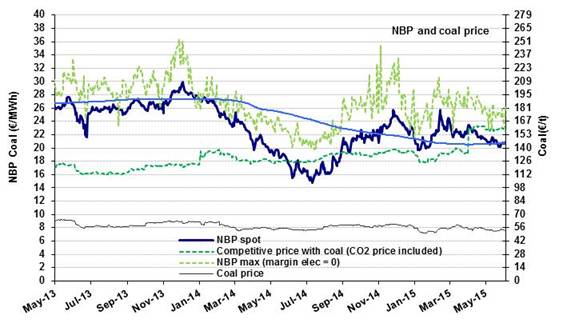 Nor are forward markets anticipating a downtrend for the next few months as sharp as that occurring in 2014, with the NBP falling below €17/MWh ($6.8/MBtu) between June and August. The forecast is that prices will slip to €19.8/MWh ($6.6/MBtu) during the summer.

The reason for greater price resistance this year compared to last year is that the business environment is very different. In the United Kingdom, the price of electricity is higher, for the time being. As a result, gas prices can rise without affecting the margins of gas-fired power plants. In addition, the Carbon Price Support was raised last April, making gas more competitive compared to coal. Looking past next summer, the forecast is for prices to return to about €22/23/MWh ($7.3/7.7/MBtu) for next winter. In this scenario, the average price for 2015 would be €21.3/MWh ($7/MBtu), close to that of 2014.

Indexed European price: down 20% since November 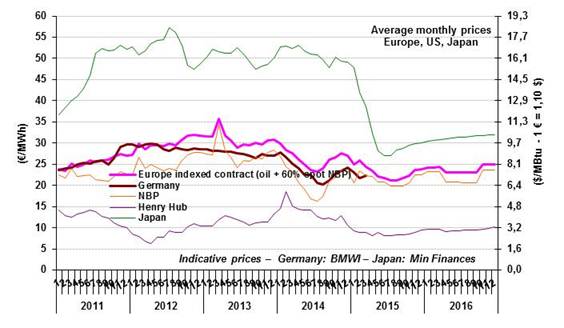 According to forecasts for the next few months, the price may continue to slip until July and reach €21/MWh ($7.0/MBtu), then rise to about €23.7/MWh ($7.8/MBtu) by year-end. These movements take into account the lessening of pressure on the futures quotes for Brent, whose price now stands at $65 for December versus $70 anticipated a month ago. The upward pressure on the Brent observed in May ($64/b,+7.5% in one month) seems to have been alleviated. 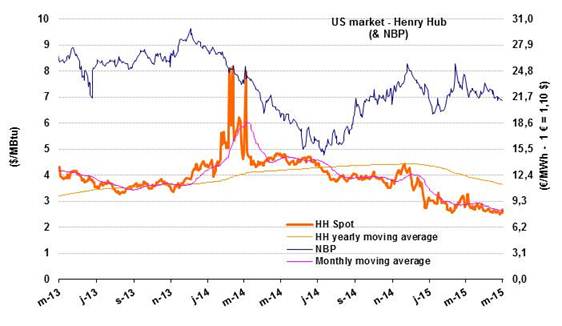 The Henry Hub price average rose 9% in May to reach $2.8/Mbtu after showing fairly volatile movements during the month (+7%/-6%). It climbed past the $3/MBtu mark on May 18 then fell to $2.8 at the end of the month. In early June, it slipped further to $2.6, which was the monthly average for April. The futures markets also reacted: the December price stood at $3.18 in mid-May and has since fallen to $3. These fluctuations may be due to uncertainty about summer demand and the impact of lower drilling activity on production.