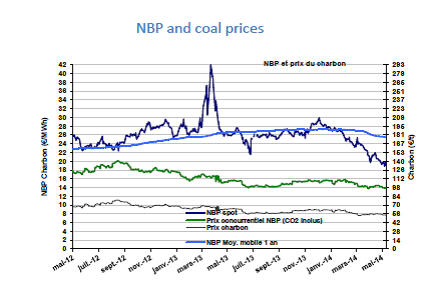 The European price (46% spot) stood at €27.9/MWh (US$11.3/MBtu) in April, down by more than 4% on the previous month, a decline that is linked to the significant fall in the price of NBP (-10.8% in April). This fall looks set to continue until September if the current trend affecting NBP prices continues.

The average HH price for the month of April stood at US$4.6/MBtu – 5% down on the previous month. Prices were under slight pressure between 21 April and 8 May owing to conflicting needs – the need for heating in the Midwest and air-conditioning on the East Coast. The fundamental target is still to reconstitute stocks which stood at 28 Gm3 on 25 April – considerably below the minimum five-year average (50 Gm3). The latest short-term estimates suggest lower-than-minimum stock levels until the winter. This explains the pressure that is now expected to affect prices – estimated at US$4.5/MBtu – until the end of the year. Everything will depend on future weather conditions and other factors (hurricanes in the Gulf of Mexico, etc.)