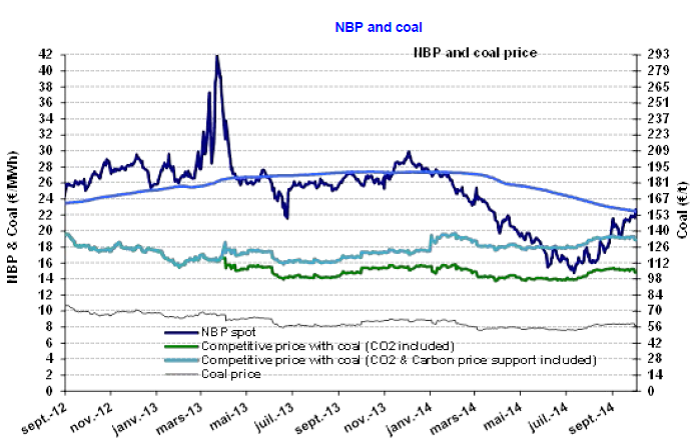 The NBP price stood at €21.8/MWh ($8.1/MBtu) in October, an increase of 4.5% in one month. However, it stayed at a level that continues to be moderate, 17% lower than the price a year ago. The market remains relatively volatile (-5% to +4% compared to the average) influenced by factors such as the temperature, fluctuations in Norwegian deliveries and declarations related to the Russo-Ukrainian negotiations. For instance, on October 17 (+1.6%), the Russian president warned Europe about big transit risks for gas this winter, just before the October 21 negotiations with Ukraine (still ongoing on the 29th). For now, the market is not anticipating a crisis. The projected winter price remains moderate, between €23.5 and 25.5/MWh ($8.7 and 9.4/MBtu) compared to €26/MWh ($10.3/MBtu) last winter. Actual trends will depend in particular on temperature (currently moderate) and deliveries from Russia. The range of “possibles” remains fairly broad, with Asian LNG providing a potential ceiling for the NBP price in the event of a crisis. 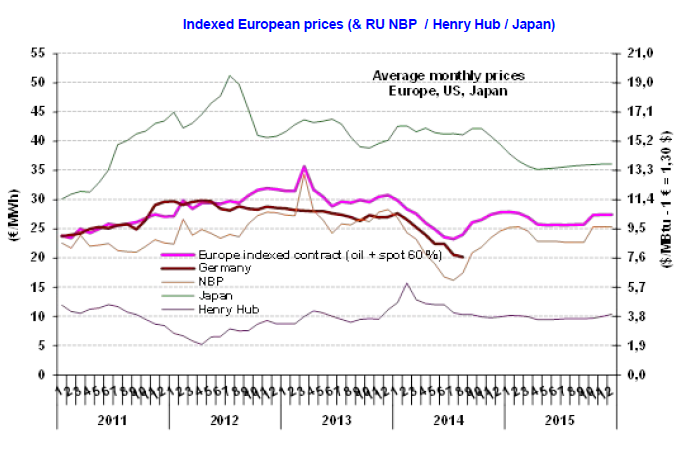 This trend in the oil price would also tend to depress the price of LNG in Asia. The average import price in Japan could drop to around $13/MBtu by mid-2015 compared to $16/MBtu at present. This would have a positive impact in Europe if it turns out that this zone has to import additional quantities of LNG this winter. This alternative has been envisaged by the European Commission and by National Grid (Winter Outlook 2014/15) in the event of a cutback in Russian gas deliveries. The scenario of a prolonged downtrend in the oil price would thus be quite favorable. 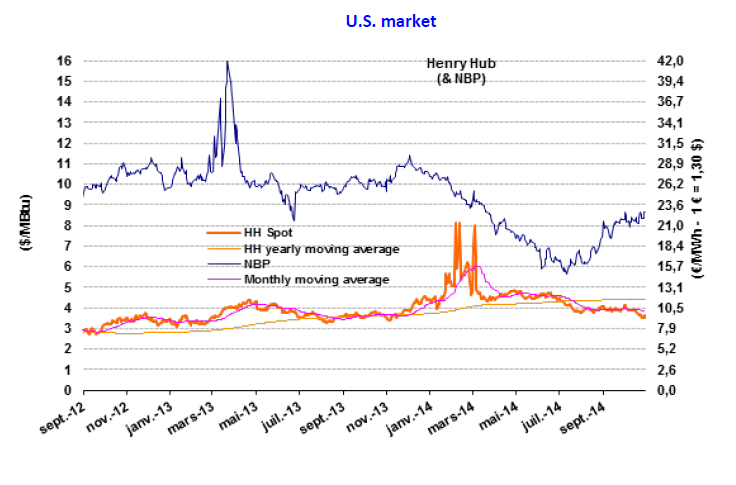 The HH price has fallen substantially, averaging $3.8/MBtu in October, i.e. 3.9% lower than in September. After October 15, it started to fall more sharply and since then has lost nearly 6% of its value. It currently stands at $3.6/MBtu. The explanation for this downward impetus may be found in the latest EIA forecasts for this winter (November-March): consumption is expected to drop by 5% compared to last year while production should grow in the same proportion. Forward prices have adjusted in the same proportions as spot market quotations, anticipating a price of $3.7/MBtu for 2015 as opposed to $3.9 forecast a month ago.