NBP: An uptrend with fluctuations 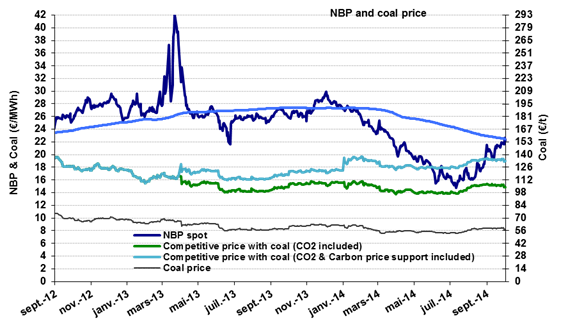 The NBP price continued its upswing, which began in July. In early October, it stood at €22/MWh ($8.1/MBtu), up from €20.9/MWh ($7.7/MBtu) in September (+20% compared to August). The price for the upcoming winter months is expected to be €25-26/MWh ($9.2-9.6/MBtu), slightly lower than anticipated a month ago. But the market is relatively nervous, as evidenced by the sudden spike of 4.6% on October 1 followed by a drop on the same order of magnitude two days later. These fluctuations reflect uncertainty about demand (due to the temperature) and the tensions surrounding the negotiations between Russia and Ukraine (the Russian proposal: 5 Gm3 over the winter at $385/1000 m3, i.e. $10.2/MBtu). The spike on October 1 thus coincides with the announcement that Russian gas deliveries to Slovakia will be halved.

The NBP Winter price generally fluctuates within a fairly broad price range. Barring extreme circumstances, the floor price is the price enabling gas to compete with coal (€19/MWh or $7/MBtu) and the ceiling is the price at which LNG cargos are diverted from Asia to Europe. If the LNG price is $14-15/MBtu in Asia, the price in Europe would be $11-12/MBtu(€29-32/MWh). Current expectations fall somewhere between these two extremes. 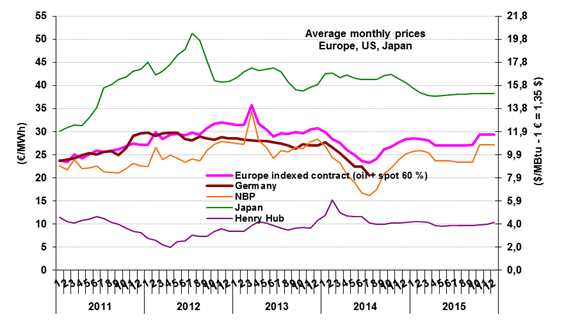 The indicative European LT price (60% spot indexation) was €26.1/MWh ($9.9/MBtu) in September, nearly 9% higher than the average for the month of August. This trend reflects the very strong progression of prices on the spot market (+20% for the NBP). This rise was curbed in part by the downtrend of Brent expressed in euros (-9.9% in one year). Based on current expectations for the NBP, the LT 60% spot-indexed price should continue to climb over the winter (€28.5/MWh or $10.4/MBtu in December). 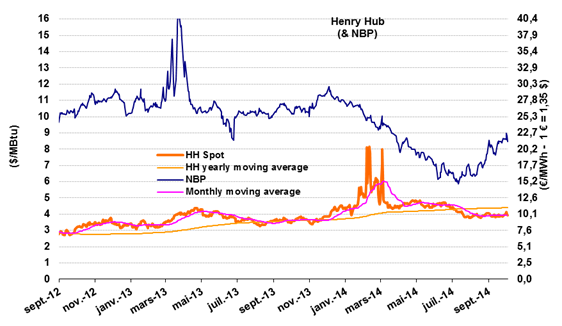 The HH price has remained flat since the month of August, averaging about $4/MBtu per month with a minimum of $3.8 and a maximum of $4.1/MBtu. The business environment continues to be affected by the gradual replenishment of stocks. The most recent statistics from the DOE indicate a stockpile of 88 Gm3 (3100 Bcf), i.e. only 7 to 15 Gm3 (250-530 Bcf) below the minimum and maximum 5-year prices (with a deficit of between 20 and 40 Gm3 at winter’s end). So the replenishment of stocks is no longer a matter for concern. As for shale gas, annual output was estimated at 354 Gm3 in August, up by 43 Gm3 in one year, including 33 Gm3 from the Marcellus Formation (120 Gm3 produced) and 11 Gm3 from Eagle Ford. On the other hand, mention should be made of the substantial decline reported for the Haynesville Shale (a drop of between 16 and 42 Gm3) due to economic reasons (it mostly produces dry gas).