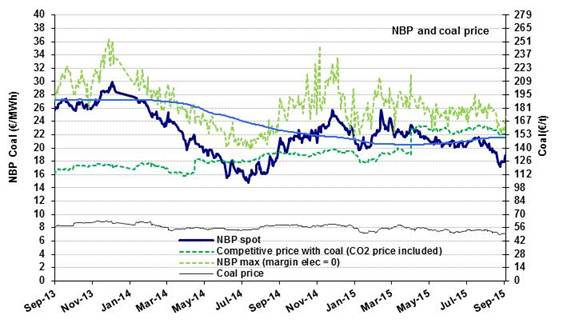 This summer, the average NBP price did not decline to the same extent as last year. In July, it even found itself under slight pressure: at €21.2/MWh ($6.8/MBtu), it was 2% higher than in June and 30% higher than in June of last year. During August, the price saw a fairly marked downtrend, hitting a low of €17.2/MWh on August 24 before rallying. The first September quotations, progressing due to sustained demand, were in the neighborhood of €18.9/MWh ($6.2/MBtu). These moderate values helped make natural gas more competitive in the electricity sector compared to coal, a phenomenon fostered since April by the increase in carbon tax support, now fixed at £18/TCO2 (about €24/TCO2). The result has been a fairly notable increase in gas consumption in this sector: 18% more in June on an annualized basis, as opposed to a 24% decrease for coal over the same period.

Looking to the months ahead, the market expects prices to remain within a fairly narrow range, i.e. between €21/MWh ($6.8/MBtu) during the winter and €19/MWh ($6.1/MBtu) next summer. These levels are in line with market conditions, e.g. the prices expected for long-term contracts or LNG spot prices in Europe.

Indexed European price: down 7% in August 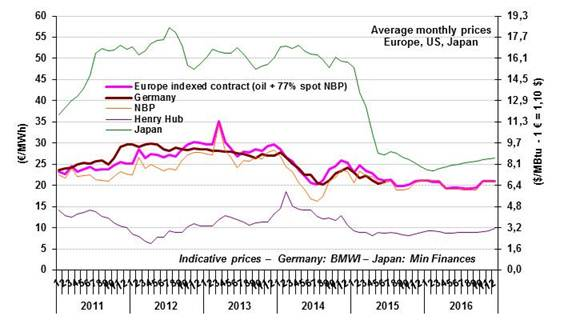 The indicative European price now incorporates a spot share (NBP) of 77.4%, in line with the new mode of computation adopted in France. This price is converging with the average German price, an indication that, in Europe, short-term markets are gaining influence to the detriment of formulas indexed primarily on oil. 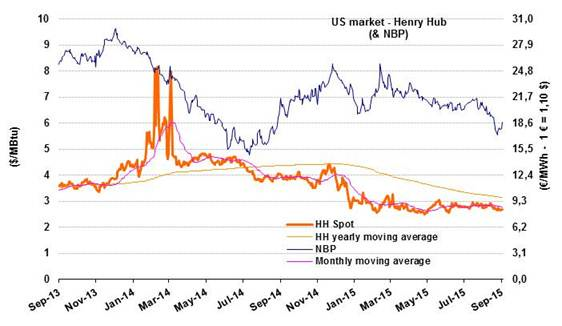 The Henry Hub averaged about $2.8/MBtu in July and August ($2.7 to 2.9/MBtu) with moderate fluctuations (from -4.9 to +5.8%). Market forecasts still predict price stability for the years to come ($2.9/MBtu in 2016 and slightly over $3 in 2017), which is consistent with DOE data. The latter still see production growing strongly (5% in 2015) despite the sharp downturn in drilling activity (-40% since November). So far, the impact of this trend on production at shale basins has been limited.