Egyptian marketed natural gas production has been steadily declining since 2009, as a result of the depletion of offshore mature gas fields and delays in new offshore developments (West Nile Delta), exacerbated by the political unrest. This downturn accelerated in 2013 (- 6%) and even further in 2014 (- 14%). In 2015, marketed production is estimated down 8.9% to 44.5 bcm, according to Cedigaz provisional estimates. 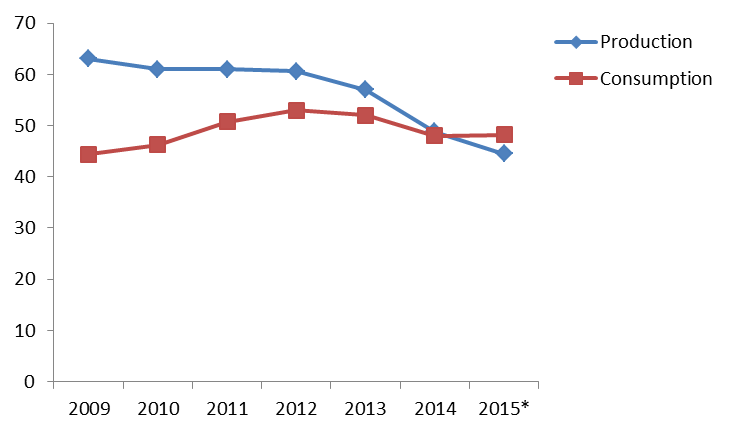 Indeed, after having sent its last domestically produced LNG cargo in 2014, Egypt commissioned two FSRUs at Ain Sokhna on the Red Sea in 2015, with a combined capacity of 13 bcm/y. Within less than a year, Egypt, which has been facing a growing gas deficit, imported about 3.6 bcm of LNG. The bulk of imports came from Qatar (1.9 bcm) while reloads from Europe, the United States and India accounted for about 0.8 bcm.Rampant summer power demand has also seen Egypt turn to Jordan to plug its supply gap. A recent agreement has been signed with Jordan to take advantage of the excess capacity of gas from the FSRU moored in Aqaba.

Egas’s last tender was for 55 LNG cargoes for delivery between November 2015 and December 2016. Although payment delays may damage Egypt’s reputation, traders seek to preserve future business. Egypt had planned to install a third FSRU in 2017, but this could be delayed amid financial issues. The Tamar project in East Mediterranean is also likely to export natural gas to the Egyptian market in the medium term.

The government is trying to spur greater foreign interest in Egypt’s gas industry as the country’s gas shortage leaves the supply of residential, electricity and industrial feedstock unsteady. In a bid to encourage growth in natural gas production, Egypt’s government has raised prices paid by some multinationals for gas they produce in the country. The government decided in July 2014 to partially curtail domestic gas subsidies, causing an unpopular increase in domestic gas prices. Domestic gas pricing was revised up from $2.65/Mbtu to $4.1/MBtu-$5.9/MBtu for discoveries and additional development phases from 2015. The price is negotiated on a case-by-case basis and takes into account the cost to explore and develop a project.

In a context of lower global energy costs, the government will reduce spending on fuel subsidies by nearly 43 percent in the 2016/17 budget, as the country seeks to reduce a problematic deficit.

The country has currently twelve gas fields worth US$33bn under development, with two major projects: BP’s West Nile Delta (WND)[1] and ENI’s giant 850 bcm Zohr field, discovered in 2015.In light of these developments, natural gas production is expected to rise to approximately 65 bcm by the end of 2020 and 85 bcm by 2035, according to CEDIGAZ. The Zohr field could thus be a game-changer for the Egyptian gas market and reduce import requirements to zero by 2020-2025, before the country begins to export LNG again. This raises some questions about future import plans, which will be rethought, as well as development of earlier finds in the East Mediterranean, especially Leviathan (Israel) and Aphrodite (Cyprus). Indeed, Israeli and Cypriot plans to sell some of the gas to the Egyptian domestic market look shakier. However, it would make more economic sense to build pipes from Leviathan and Aphrodite to the Zohr infrastructures, where the gas could feed now-idle LNG export plants at Idku and Damietta. After years of political and regulatory delay, East Mediterranean gas projects have been given a new impetus in the prospect of turning Egypt into a regional gas hub. 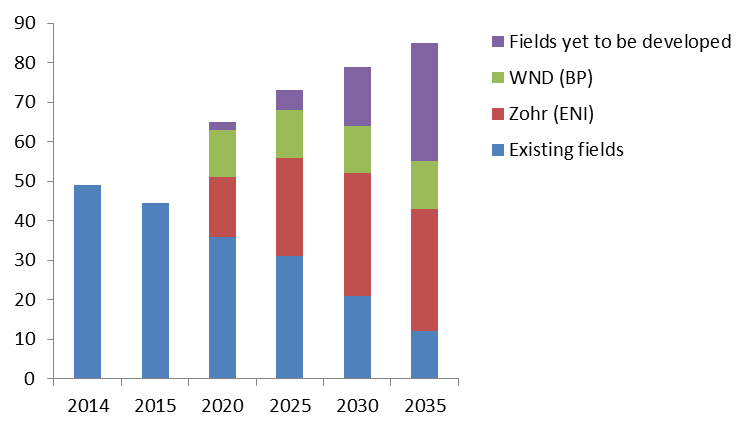 [1]BP is the operator of the West Nile Delta (WND) project in the Mediterranean Sea (North Alexandria Concession and the West Mediterranean Concession), which is expected to start in 2017. The EGPC will purchase all production at an original price of $4.1/MBtu and pump it directly into the national grid. The price is revised every five years, which means that the price will likely be increased four times over the contract duration of 20 years.