CEDIGAZ’ Natural Gas in the World 2016 report confirms the provisional estimates published early May, showing a moderate natural gas demand growth in 2015 for the third year in a row. Global gas consumption grew by 1.5%, still below the ten-year growth rate of +2.2% despite low gas prices. The global marketed natural gas production growth was again led by the United States (shale gas).

Like in 2014, the natural gas expansion was constrained by some demand side factors which have offset the impact of low gas prices: intense competition with cheaper coal (and oil in China) in both industrialized and emerging markets, the development of nuclear and renewables, as well as increased energy efficiency, weak power generation growth and the sluggish economic context. 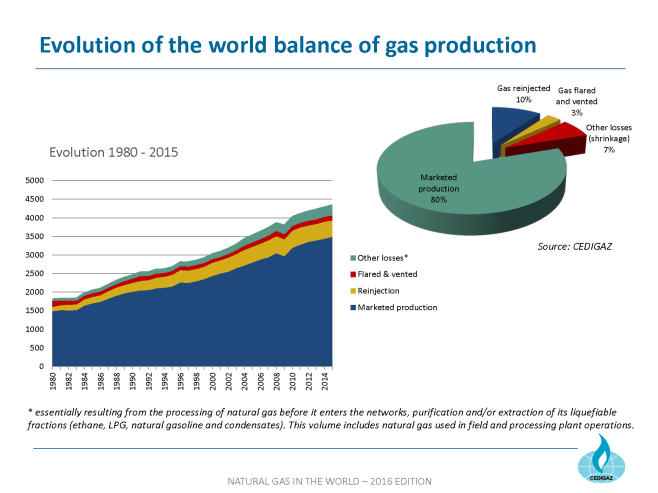 World gross natural gas production increased at a lower rate of 1.3% to 4,359 bcm in 2015, but quantities of reinjected gas decreased substantially, down 3.6% to 441 bcm. Global flaring was estimated up 2.1% to 134 bcm. Moreover, production losses related to both processing (extraction of liquids, treatment) and field operations surged 5.7% to 292 bcm.

According to CEDIGAZ revised statistics, world actual gas consumption, which takes stock changes into account, increased by 1.5% to 3,471 bcm in 2015, marking a recovery after a relative stagnation (+ 0.3%) recorded in 2014. However, this apparent recovery was mostly the result of a weather driven rebound in the EU (+ 4.5%). In Asia-Oceania, natural gas consumption was rather stable, representing an historic rupture after three decades of buoyant expansion.

In a context of rising demand in Europe, by far the leading import zone, international gas trade (including LNG re-exports) increased strongly by 3.1% to 1,043 bcm, fuelled by both pipeline trade (+ 3.4%) and LNG flows (+ 2.4%).

After several years of little or no increase, total net LNG imports regained momentum in 2015, up 2.8% to 323 bcm. Lower demand in Asia was compensated by recent emerging markets, while Europe became a market of last resort in a context of healthy supply . Due to the LNG glut in Asia, the spread between NBP and Northeast Asian spot prices narrowed considerably as compared with 2014, limiting LNG arbitrage possibilities between Asia and Europe.

Cedigaz is an international association with around 90 members worldwide, created in 1961 by a group of international gas companies and the Institut Français du Pétrole Energies nouvelles (IFPEN). Dedicated to natural gas information, CEDIGAZ collects and analyses worldwide economic information on natural gas, LNG and unconventional gas in an exhaustive and critical way.