Follow @Cedigaz_SGHome » Blog » Waiting for the Next Train? – An Assessment of the Emerging LNG Industry in Canada

In February 2015, Canada counted 22 LNG liquefaction plant projects – of which 17 are located in British Columbia – representing a total design capacity of 325 mmtpa. Canada has the potential to become a major LNG exporter but no project has received Final Investment Decision (FID) so far. Competition with US brownfield projects with innovative business models have limited the commercial appeal of many Canadian projects relying on oil indexation. More recently, plummeting oil prices have put into question their profitability and lead to several postponements of FID reviews. CEDIGAZ’s new report Waiting for the Next Train? An Assessment of the Emerging LNG Industry in Canada discusses the potential for Canada to export LNG, looking at the initial enthusiasm and wide support by public authorities and local communities but also at the economic challenges and commercial issues that are slowing the progress of these projects. 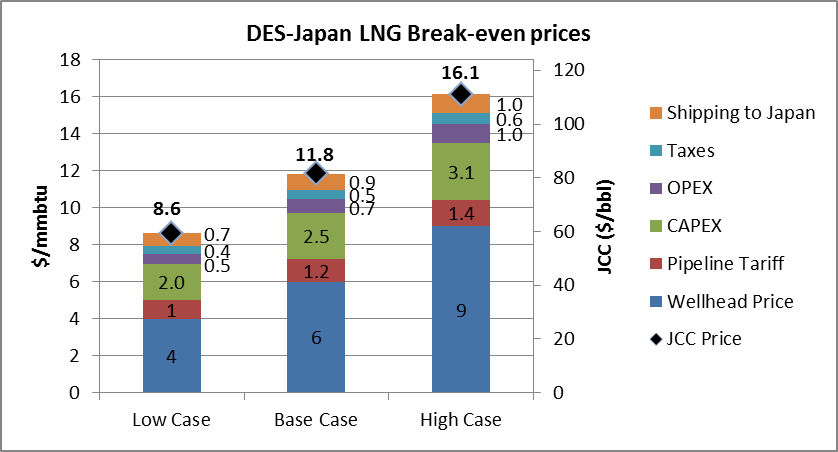 British Columbia (BC) projects appear to be especially capital-intensive. Indeed, many of those projects are planned on greenfield sites and, unlike their US competitors, have to bear the additional cost of upstream development in remote areas, with all the necessary transport infrastructure. Similarly, The cost of feed gas is a major uncertainty for these projects, as it will be mainly sourced from yet-to-be-developed unconventional plays in the Western Canada Sedimentary Basin, where available data show important variations in productivity from one well to another.

In order to assess the economics of British Columbian projects, CEDIGAZ has modeled a typical 12.8 mmtpa plant and computed the total cost of LNG delivered to Japan, according to three scenarios designed to reflect costs uncertainties.

Our base case assumptions show that LNG price in Japan should equal $11.8/mmbtu to recover all costs. In the low case, LNG should at least be sold at $8.6/mmbtu and in the high case, it should reach $16.1/mmbtu. Assuming an average 14.5% slope for Japanese contracts indexed on the Japanese Crude Cocktail Price (JCC), Canadian LNG projects require a minimum JCC of $81/bbl with the base case assumptions. In the low case scenario, JCC break-even price for LNG projects is $59/bbl while it is up to $111/bbl in the high case. 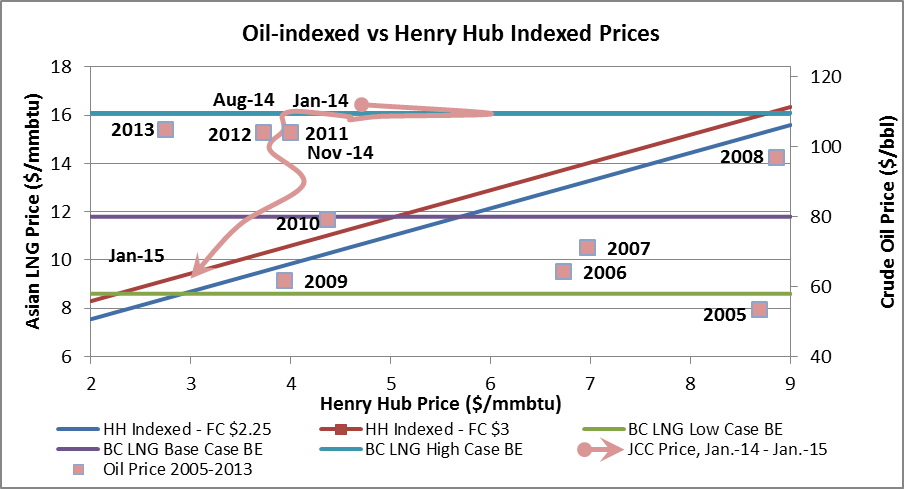 Moreover, Canadian projects, which will sale LNG based on oil-indexed contracts are facing competition with US Henry Hub indexed LNG plants. Historical analysis shows that, when oil prices were high, the Henry Hub price indexation would have offered more attractive prices for buyers. For example, Sabine Pass contracts, which are priced 115% of Henry Hub (HH) plus a fixed sales charge of US$2.25-3.00/mmbtu, would have resulted in FOB sales price in the range of $7.3 to $8.1/mmbtu, on average in 2014, based on an average HH price of $4.4/mmbtu this same year. Assuming a shipping cost from the Gulf of Mexico (GoM) to Japan of $3.0/mmbtu, the total DES price would have ranged between $10.3/mmbtu and $11.05/mmbtu while a 14.5% slope indexation on JCC based on 2014 JCC average price of $105/bbl would have yielded a LNG DES price of $15.2/mmbtu. With the exception of 2008, it appears that the oil prices have been either too low for the BC LNG projects to break-even in our base case or too high relative to the HH for these projects to compete with brownfield GoM projects. The challenge for BC LNG projects is therefore to combine profitability and competitiveness with US LNG projects.

By 2035, CEDIGAZ estimates that Canada will export 34 mmtpa of LNG (cf. CEDIGAZ Medium and Long Term Outlook), meaning that only a few projects are expected to be built. Based on six objective criteria, CEDIGAZ has ranked projects into three categories according to their chance to succeed. The first category comprises only the front-runners, i.e. the projects that have the best chance to reach a positive FID on a short/medium term perspective: Pacific Northwest LNG, Douglas Channel LNG, Goldboro LNG and LNG Canada. The first two have planned to reach FID in 2015 and the last two in 2016. The second group is composed of seven projects which are less advanced, but still have some chances to succeed. The third and last group contains the projects with the least chance of success as things currently stand.

The report can be downloaded from CEDIGAZ’ Website (https://www.cedigaz.org/shop-with-selector/)