Unsurprisingly, given the present context of uncertain demand and looming gas bubble, with Europe as a whole well (over?) contracted in long-term supply contracts, the present update shows little difference from the previous, one-year old version. Indeed, no new contract was added to the database.

Given the ever growing market uncertainty, the buyers focus on increasing the flexibility of their existing contracts (for instance by lowering the minimum TOP volume or shortening the renegotiation periods) and pressing for more gas indexation (which usually comes with reduced volume flexibility).

According to the IGU (based on companies’ declarations), 92% of the gas sold in NW Europe in 2015 is now priced according to the market (gas-on-gas pricing), which, according to Cedigaz estimates, would mean that around 70% of Gazprom’s long-term sales are considered by NW Europe buyers as being market based. This contrasts with Gazprom’s recent declaration that just 17.8% of its supply contracts with European companies are now hub indexed. Perimeter considerations notwithstanding, the difference is probably essentially a matter of terminology for communication purposes: while European buyers are keen to communicate the fact that their portfolio is increasingly marked to market, Gazprom still pays lip service to oil-indexation. Therefore an oil-indexed contract with a TTF-linked price corridor can be presented as market based by ENI and as oil-indexed by Gazprom.

The updated edition of the Cedigaz database lists 126 contracts in-force in 2016 for a total volume of above 420 bcm/y, including 80 contracts (301 bcm/y) between EU28 buyers and non-European sellers and 29 intra EU28 contracts (61 bcm). The update edition also includes additional information relative to the phasing out of Dutch contracts to 2030. 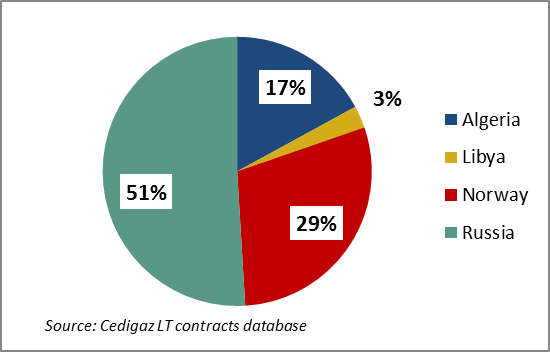