The recently disclosed update of Cedigaz’ database on Long-Term Pipeline Supply Contracts in Europe shows limited contractual activity during the past 12 months. Since the database’s last update in June 2014, only 3 new contracts, all with UK buyers, have been identified by Cedigaz for a total volume of 6.56 bcm/yr. with durations ranging from 6 to 10 years. This contrasts with the 18.3 bcm/yr. contracted or renewed in 2013, including 10 bcm/yr. of Shah Deniz contracts and the extension for 4 years (until the end of 2017) of the 6.2 bcm/yr. between Gazprom and Panrusgaz (Hungary).

Contracts in force in Europe[1]

Import contracts into EU28 at the start of 2015 totaled 302.5 bcm/yr., up 7 bcm/yr. year-on-year as contracts worth 7.6 bcm/yr. came into force, from which 0.6 bcm/yr. from expired contracts must be subtracted. These new volumes pertain to contracts signed by Gazprom from 2006 to 2013 with buyers in France, Germany and the UK. Contracted volumes exceed pipeline imports (around 233 bcm in 2014) and the gap has been growing on average since 2009 because of the decline in overall European gas demand. Contracts with Russia represent more than half (52%) the total contracted volumes and this proportion is growing in the years ahead for the portfolio of existing contracts. Gazprom’s contracts guaranties the company an almost stable output until 2020 and will still represent more than 120 bcm/yr. in 2025. This is less the case for Statoil and Sonatrach whose contracts portfolios have shorter maturities on average. These companies will see their contracted volumes decline rapidly in the coming years and will need to renew existing contracts or sign new ones.

The growing difficulty to rely on long-term projection of gas demand and prices has led, on average, over the years since the first long-term contracts were signed with the Netherlands and Russia in the 1960s, to a trend of shorter contractual durations that is well reflected in Cedigaz’s data. 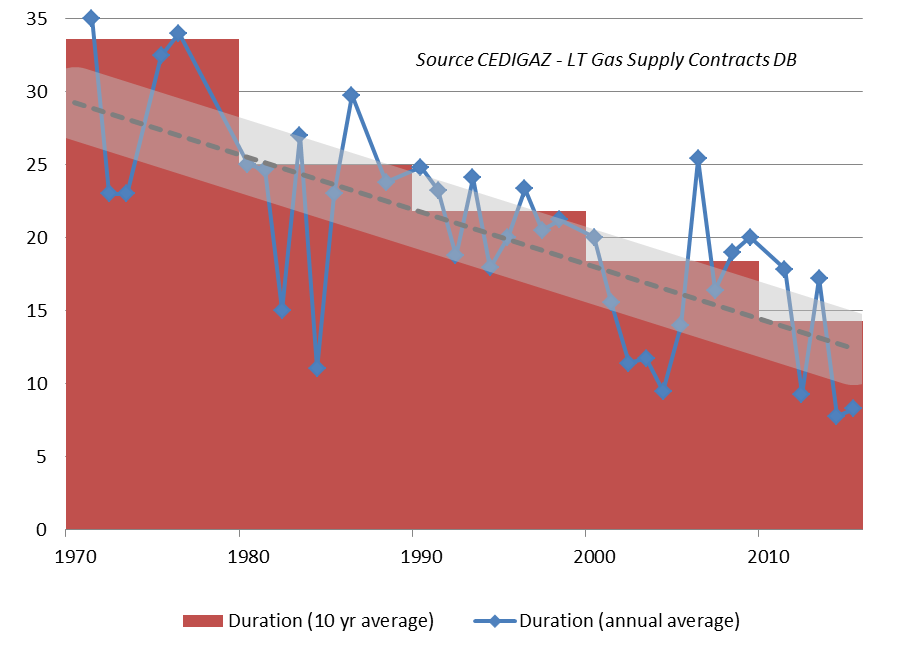 This trends favors companies with a well amortized portfolio of upstream and midstream assets that allows them to bring new gas to the market at a low cost, such as Gazprom.