Natural gas will play a growing contribution in both OECD and emerging markets to meet the economic, environmental and security challenges of the world energy system. However, the future expansion of natural gas should not be taken for granted. Increased competition with coal in the power sector will need to be addressed while maintaining a gas price at a level compatible with the development of large capital-intensive projects. Only by resolving this conundrum can natural gas fully live up to expectations.

Gas demand growth is expected to remain strong to 2035, under the impulsion of the Middle East and China, where natural gas is making inroads in all consuming sectors 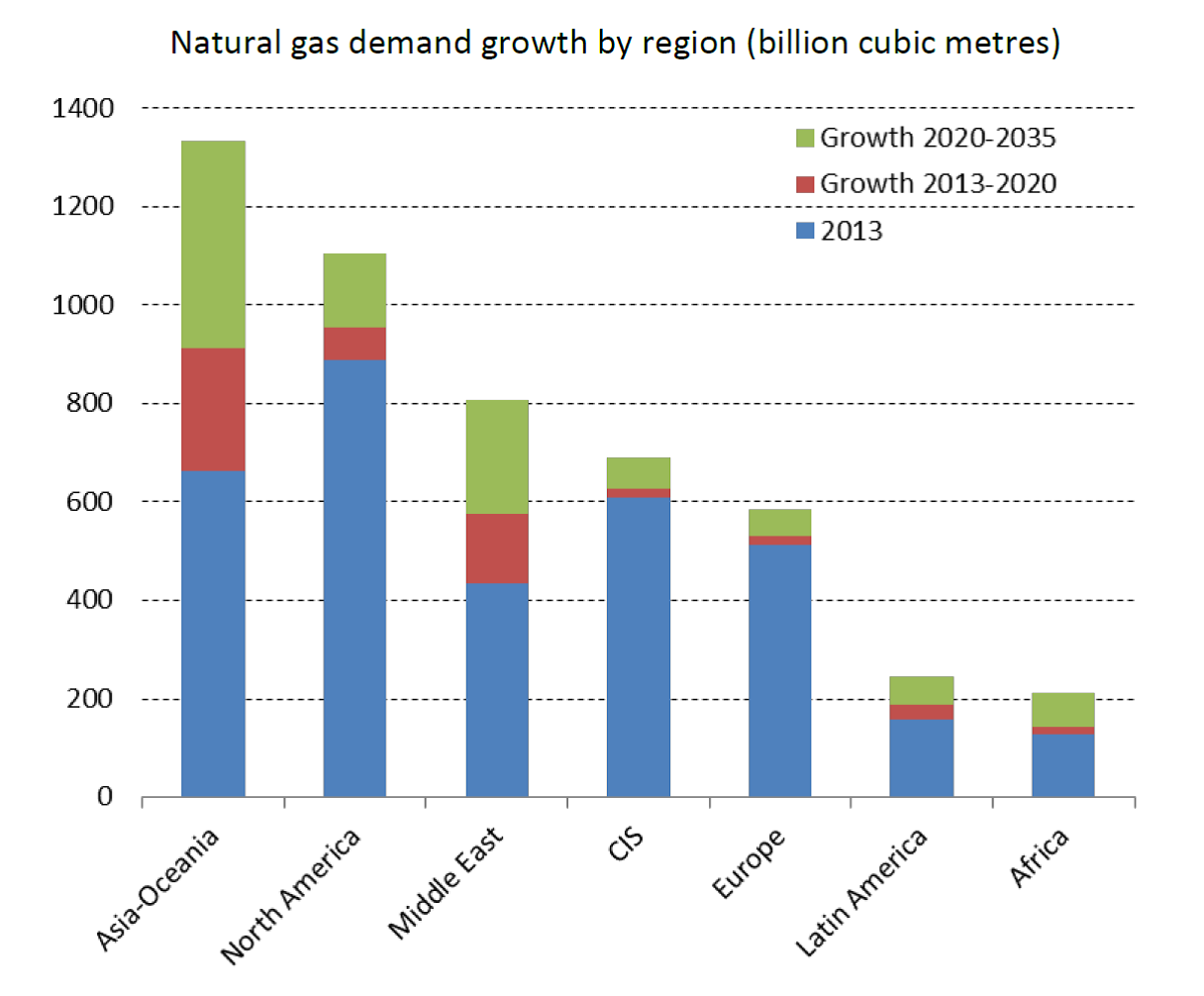 ➢ Energy efficiency gains will slow down both global primary energy and gas demand growths relative to the previous decade
➢ Global primary energy demand will grow by 1.3% per year and natural gas demand by 1.8% per year to 2035. Natural gas will increase its share in the global energy mix from 21% in 2013 to near 24%
in 2035
➢ Approximately 75% of the projected growth will come from emerging markets, driven by the economic growth and the displacement of oil in every main consuming sector
➢ Natural  gas  should  also  expand  in  the  power  sector  –  and,  to  a  lesser  extent,  in  the transportation sector – in OECD countries under the incentive of environmental & climate policies
➢ Asia-Oceania and the Middle-East will drive demand, accounting respectively for 42% and 24% of global growth. Asia-Oceania will become the largest consuming area post-2020, led by China.
➢ In China, the future growth of natural gas will be driven by the implementation of an energy and environmental policy aiming to shift away from coal to cleaner fuels in the long term

Natural gas supply is driven by Asia-Oceania, the Middle East and the US (shale gas)

➢ Natural gas production will grow significantly in every region except Europe, where it will decline. The largest production gains will be posted in Asia-Oceania (China, Australia), the Middle East and North America
➢ At  country  level,  the  US,  China  and  Russia  are  expected  to  be  the  fastest-growing producers
➢ Unconventional gas will provide almost 60% of global additional supply and will account for 32% of global gas output in 2035, up from 19% in 2013
➢ Outside North America,unconventional gas growth will be concentrated in China and Australia. Shale gas production will gradually develop worldwide post-2020 but will remain limited to a few countries 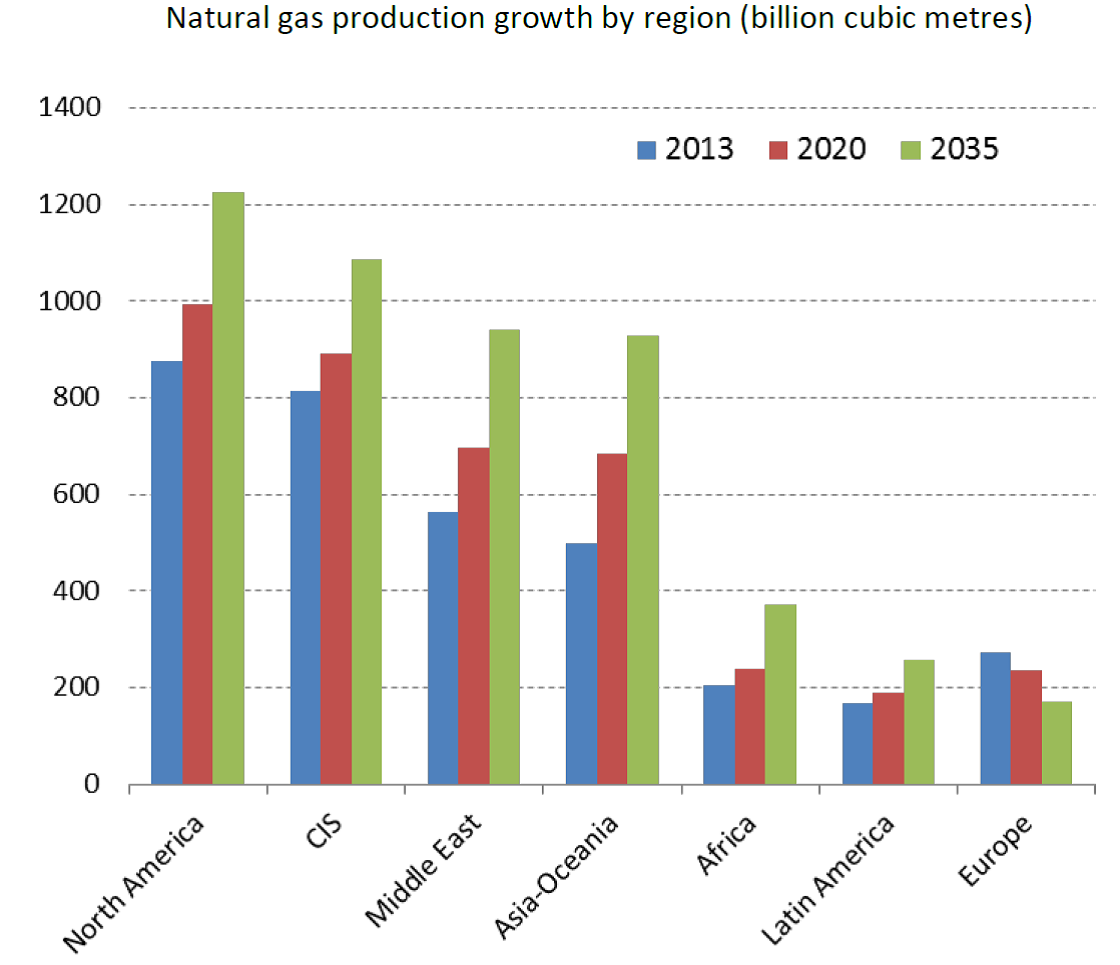 ➢ Europe and Asia’s increasing dependence on imports will drive a strong expansion of net inter-regional gas trade, expected to grow by 3.1% annually to 2035
➢ LNG trade growth will be stronger than that of pipeline and its share of net inter-regional trade will increase from 46% in 2013 to 50% in 2035
➢ LNG will be supplied from a growing number of sources and new leaders will emerge in North America, Oceania and East Africa
➢ LNG will lead to a growing internationalization of gas markets with flexible LNG and hub pricing gradually expanding in Europe and Asia 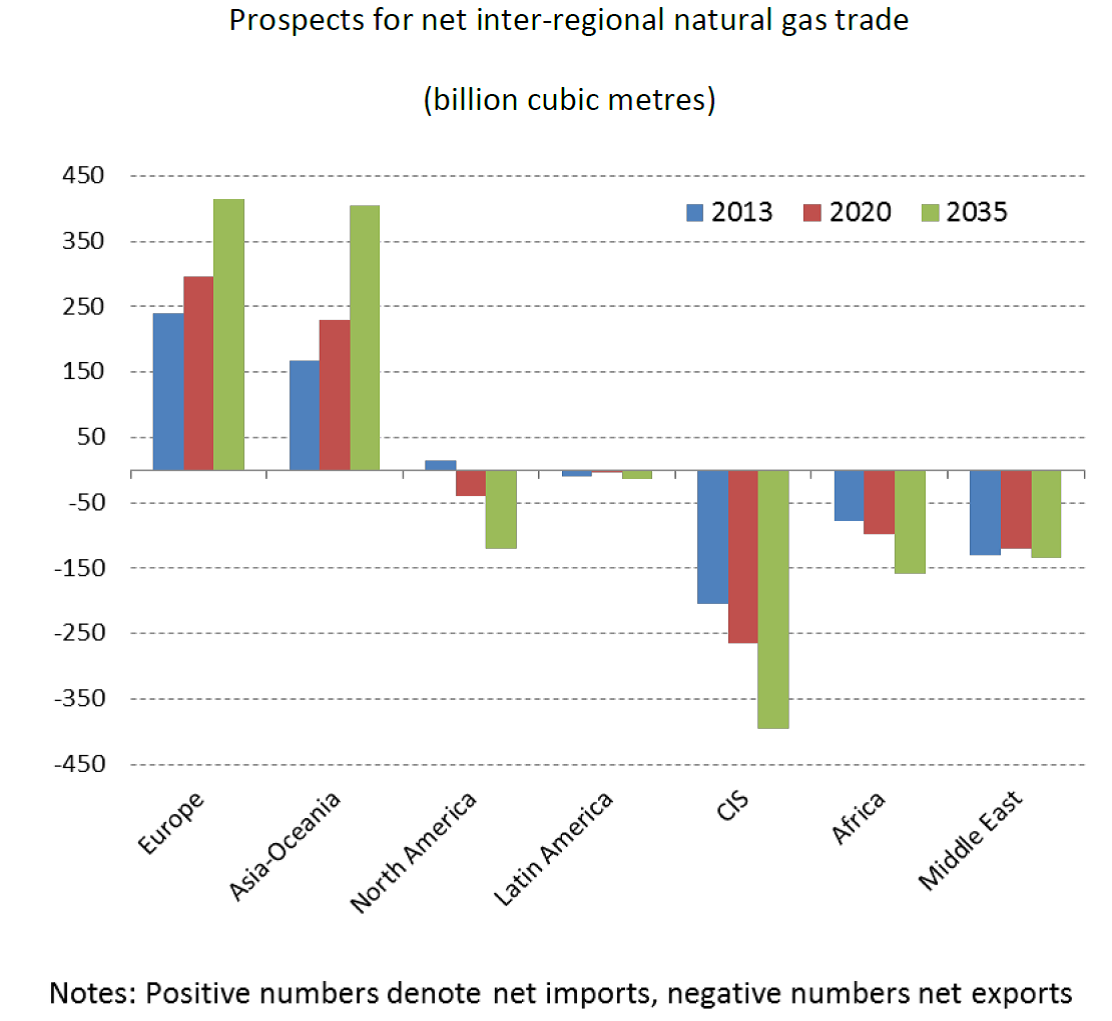 Despite the short-term picture of an abundant LNG supply, the international LNG market is expected to tighten post-2020, reflecting major investment challenges

➢ Europe and Asia will be in strong competition to access LNG supply, pushing up international spot LNG prices
➢ In this context, pipeline gas exports from the CIS (Russia, Central Asia) to Europe and Asia are expected to grow strongly. Despite the growing role of LNG, Europe will remain largely dependent on Russian pipeline gas.
➢ In the Middle East and Latin America, rising domestic needs and political risks will limit the potential of exports from these two regions

➢ Long-term contracts and partial oil-indexation in Asia will remain necessary to trigger investments in gas supply projects in the absence of a fully global natural gas market
➢ In emerging markets, implementing regulatory and price reforms are critical to boost imports and encourage investments in E&P (including unconventional gas)
➢ As coal remains a major competitor, especially in the power sector, appropriate energy policies and environmental regulations (CO2 pricing) will be decisive for the successful expansion of natural gas demand across the world