In 2021, global gas demand surged 4.5% and recorded the largest volumetric growth on record, with an annual gain of 173 bcm that more than offset the 2020 2% decline. This strong rebound took place in the context of a faster than expected economic recovery following the lifting of lockdowns and a strong growth of global energy demand. Both economic, geopolitical and weather factors contributed to the growing and unprecedented tightness of the global gas market. They led to an explosion of Asian and European spot prices to historic highs. 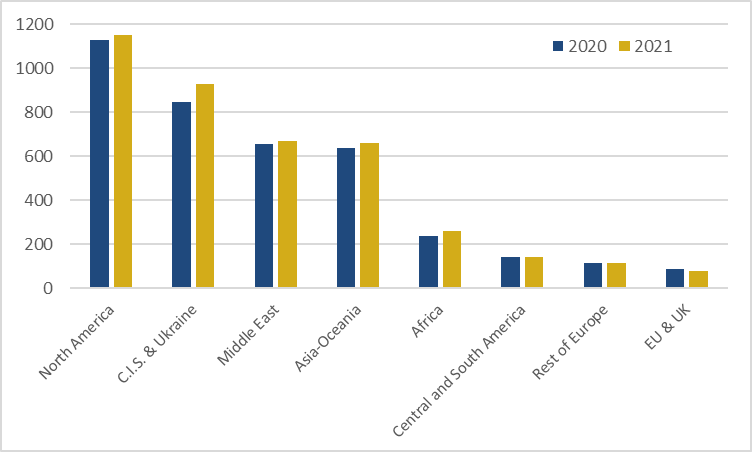 The impressive recovery of global gas demand in 2021, up 4.5% to 4028 bcm, was concentrated in the first half of the year. World gas consumption was boosted by a strong post-Covid economic recovery in the first half and extreme weather events, including:

In many countries, the growth of natural gas consumption was driven by power generation, thanks to both political support and favourable economics in a context of higher coal and carbon prices.

At the national level, the largest increases were recorded in Russia (+ 47 bcm) and China (+ 42 bcm), followed distantly by Turkey, Brazil, Iran, Italy and South Korea. 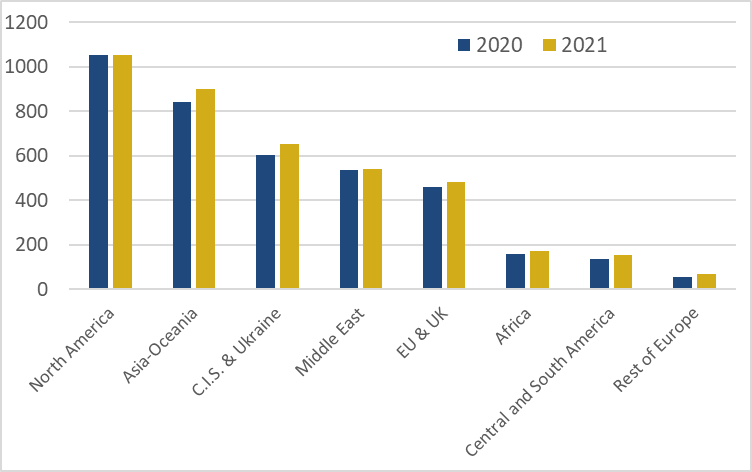 These developments from both the demand and supply side created a growing gap between supply and demand in Asia and Europe, where import dependence on extra-regional sources increased. Furthermore, the region of South and Central America turned from a net LNG exporter to a net LNG importer. Reversely, there was a growing supply surplus in the CIS, as well as in North America and Africa. In consequence, international gas trade (net flows) rebounded by almost 7% to 1038 bcm in 2021, after a 2% decline in 2020. This is the strongest growth since 2010, which can be attributed to a record growth of pipeline trade (+ 41 bcm; + 7.8%) as well as a significant growth of LNG trade (+ 25 bcm: + 5.4%). The share of international gas trade in global supply increased to 26.5% in 2021. In the last five years, the share of LNG supply in total gas trade gained 10 points to reach 47% of international gas flows today.

In Europe, despite a strong growth in pipeline gas imports from Norway, Algeria and Azerbaijan (Trans-Adriatic Pipeline), massive storage withdrawals were needed to meet the fast-growing demand and compensate for a decline in indigenous production, as well as in LNG and Russian pipeline imports. This resulted in record-low storage levels amid an extreme market tightness.

Figure 3: Evolution of international gas trade and share of LNG 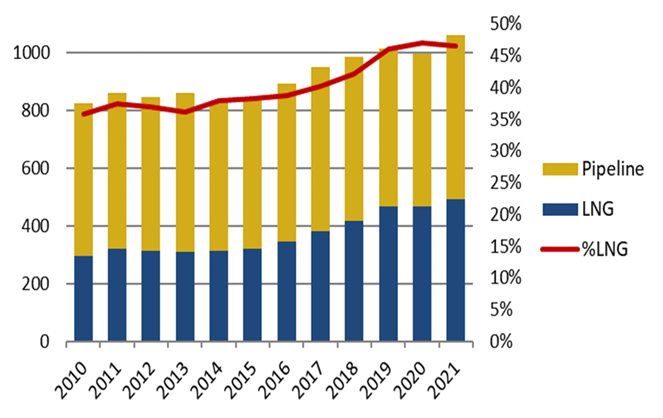 In 2021, European and Asian spot prices pursued their bull ride and exploded to new historic highs at year-end in a context of unprecedented supply tightness and geopolitical tensions (Russia/US/Ukraine, Nord Stream 2, Algeria).

The extreme variability and new record spot price volatility in 2021 contributed to growing incentives to minimise risk in an increasingly unpredictable market, encouraging the signature of long-term contracts and discouraging spot purchases. 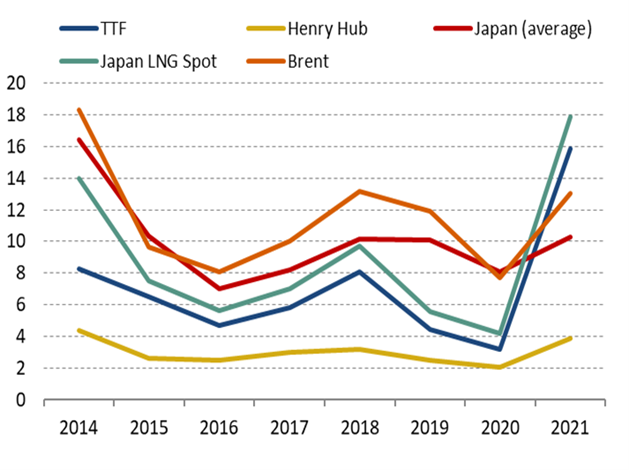 In 2021, most of gas producing countries, with the exception of Russia, approached their ultimate production capacity, even if this latter was reinforced on some large fields (Troll in Norway, Hassi R’Mel in Algeria) or if a few new projects started production (Egypt, Russia, Malaysia).

The global spare production capacity fell strongly in 2021, to represent only a marginal share of 1% of world gas production today, with the bulk of it concentrated in Russia. The sharp drop of spare production capacity in 2021 is mainly due to the recent but growing imbalance in the LNG market. The acute lack of investments in the last years points a persistent tightness on the global LNG market in the next three years. Additional LNG investments are needed to meet the growing LNG supply gap after 2025.

In 2021, underground gas and LNG storages played an important role to balance gas demand and supply, to meet growing winter demand in 2021 and ensure security of supply for winter 2021/2022.

-European imports from Norway, Algeria (despite the closure of the MGE pipeline at end-October) and Azerbaijan (Trans-Adriatic Pipeline),

Cedigaz is an international association with members all over the world, created in 1961 by a group of international gas companies and the IFP Energies nouvelles (IFPEN). Dedicated to gas information, CEDIGAZ collects and analyses worldwide economic information on natural gas, renewables gases (biogas & hydrogen), LNG and unconventional gas in an exhaustive and critical way.