Follow @Cedigaz_SGHome » Blog » NATURAL GAS DEMAND WILL PURSUE ITS SHORT AND MEDIUM-TERM GROWTH TRAJECTORY TO 2035, RISING AT A GRADUAL PACE OF 1.6%/YEAR.

CEDIGAZ, the International Association for Natural Gas Information, has just released its « Medium and Long Term Natural Gas Outlook 2017 ». This scenario, which incorporates national energy plans, highlights the growing role of natural gas as a key transition fuel towards an increasingly renewable-based, efficient and sustainable energy system. In this scenario, natural gas demand is expected to rise by 1.6%/year over 2014-2035 and its growth in absolute terms will outstrip that of all other energy sources. The strong expansion of LNG supply and the abundance of both conventional and unconventional resources will help gas to expand its role in the energy mix to the detriment of coal and oil. In a context of increased globalization of gas markets and diversification of natural gas supply, spot pricing will be a growing component for the commercialisation of gas. Many countries have policies that should favor gas consumption over other hydrocarbon sources, especially in the power sector. Coal-to-gas switching contributes to a strong decline in the future growth of carbon emissions. However, this will not be enough to reach the +2°C target: emissions in the Cedigaz scenario would put the world closer to a +3°C path.

Natural gas demand will pursue its short and medium-term growth trajectory to 2035, rising at a gradual pace of 1.6%/year, under the impulsion of China and the Middle East.

Natural gas supply will diversify and will incorporate a growing share of unconventional gas, driven by North America and Asia. 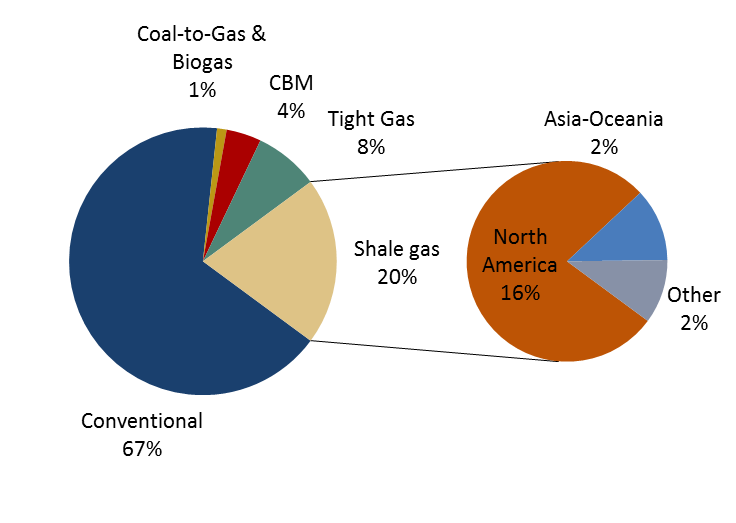 Cedigaz (International Center for Natural Gas Information) is an international association with around 80 members worldwide, created in 1961 by a group of international gas companies and the Institut Français du Pétrole Energies nouvelles (IFPEN). Dedicated to natural gas information, CEDIGAZ collects and analyses worldwide economic information on natural gas, LNG and unconventional gas in an exhaustive and critical way.