Follow @Cedigaz_SGHome » Blog » Natural gas has a crucial role to play in the current transition to a low carbon economy, raising investment challenges which have become even more prominent in the current period of economic crisis and low prices.

CEDIGAZ, the International Information Center on Natural Gas, has just released its « Medium and Long Term Natural Gas and LNG Outlooks 2020 ». Cedigaz Scenario assumes the effective realisation of official energy plans and climate policy targets. It is built upon the implementation of strong energy efficiency programmes and the expansion of low carbon technologies. It highlights that natural gas will play a growing role in the world energy mix to meet both the growing energy demand and climate policy targets. The future expansion of natural gas in the energy mix is driven by the competitiveness and abundance of resources in gas-rich countries (North America, Russia, Middle East… ), which will expand LNG export capacities required to meet the growing gas demand, especially in emerging Asian markets. Despite a post-pandemic recovery assumed post-2021, the Covid-19 pandemic has a meaningful impact on the economy, investments, energy prices and gas demand in the short and medium term. Therefore, the future expansion of gas in the next two decades is conditioned on the timely materialization of investments, especially in the upstream and LNG business, which represents a key challenge in a context of low oil and gas prices. 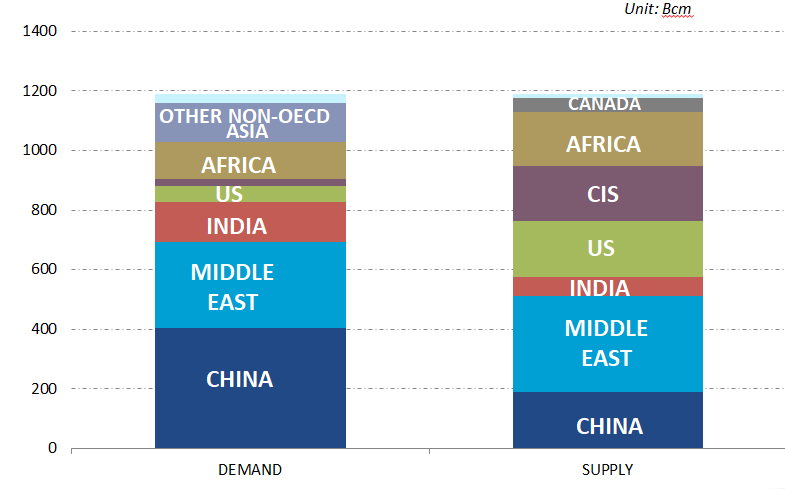 Cedigaz (International Center for Natural Gas Information) is an international association with members all over the world, created in 1961 by a group of international gas companies and IFP Energies nouvelles (IFPEN). Dedicated to natural gas information, CEDIGAZ collects and analyses worldwide economic information on natural gas, LNG, low-carbon gases and unconventional gas in an exhaustive and critical way.