India aims to raise the share of natural gas in the energy mix from 6.5% currently to 15% in 2030. This would lead to a huge growth in LNG imports. But India is one of the most sensitive price markets and needs infrastructure development for natural gas to fulfil its development potential. To address these challenges energy majors are moving downstream to get closer to the final users. COVID-19 has introduced an additional uncertainty to natural gas demand growth but the Indian gas market fundamentals remain robust.

The Indian natural gas market presents a substantial growth perspective. The Indian Government is actively promoting natural gas to diversify its energy mix towards cleaner fuels, reduce oil dependency and tackle air pollution in big cities. The aim is to move towards a gas-based economy and raise the share of natural gas in the energy mix to 15% by 2030 from around 6.5% now. Over the past two years, there has been growing attention on rapidly building out gas infrastructure, including inter- and intra-state pipelines, LNG import terminals, city gas distribution networks to cover over 70% of the population, and CNG/LNG stations across the country. Domestic and foreign investments in the natural sector are likely to amount to $60 billion over the next five years. 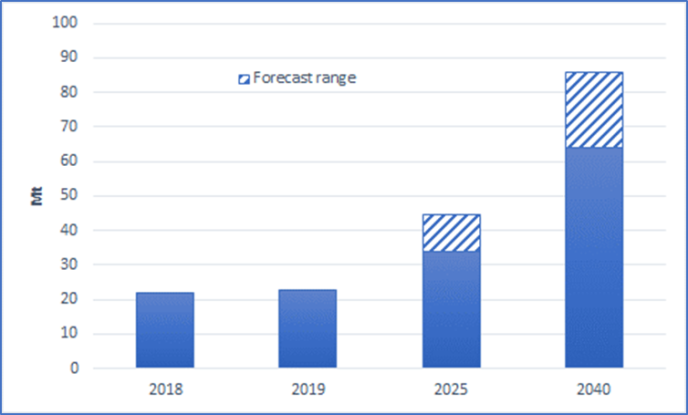 As future domestic gas production gains are not able to cope with the strong growth in gas demand, LNG imports are called to play an ever-increasing role to cover the demand/supply gap. They already represent half of Indian gas supply. With one of the world’s largest growth in LNG demand by 2040 and a large share of its future LNG needs uncovered by long-term contracts, India provides a growing outlet for LNG suppliers. Competition to supply the market is developing, as attested by recent preliminary deals with US Tellurian and Russian Novatek.

But the Indian gas market does not come without challenges. India is one of the most sensitive price markets and affordability of LNG supplies remains a key issue, triggering renegotiations of existing LNG contracts. The changing global LNG market environment also pushes LNG buyers to seek better contract terms. Despite the rapid build out of LNG terminals in India over the past two years and a new wave of investments in LNG import capacity, one key restricting factor to increased LNG supplies is the lack of connectivity of the terminals with downstream buyers.

Over the past two years, India’s growing urgency to embrace cleaner fuels and the government’s focus on natural gas have prompted oil and gas majors to redefine their growth strategy in India. Energy majors, such as Total, ExxonMobil, BP, Shell, Novatek and Petronas, have extended (or signal their intention to extend) their position into the downstream segment of the Indian market in partnerships with leading Indian oil and gas companies and conglomerates. These partnerships target LNG regasification terminals, door-step delivery of LNG, gas and LNG fuelling stations, and gas distribution in the whole country. They offer win-win solutions to both Indian partners and consumers and energy majors. They constitute a key leverage to the Indian vision to realise a gas market-based economy by making natural gas more accessible and affordable, enabling fuel switching to cleaner natural gas and releasing significant latent gas and LNG demand. The key focus on door-step delivery of LNG and the use of LNG as a transportation fuel offers immediate gains for the LNG market, the Indian economy, and the environment.

The coronavirus pandemic brings uncertainties and challenges to the near-term realization of investment and growth. India is gradually reopening its economy after a lockdown that lasted more than two months and halted most economic activities. While COVID-19 has hit Indian gas demand severely, the underlying fundamentals that support Indian gas demand and investment in gas and LNG are robust. Despite a deep contraction in Indian economic activity in 2020, prospects for 2021, while still highly uncertain, are for a substantial economic growth rebound. This may enable the Indian gas sector to continue growing and the nation to move towards a gas-based economy.