Gas prices rose in Q1, mainly owing to a harsh winter (Fig. 1). Since then, they have declined, as is usually the case in spring and summer. The gas prices in Europe and Japan should be higher this year than last year, due to the uptrend in the oil price and its impact on Asian oil-indexed contracts and winter spot prices. For this summer, the increase in the CO2 price in Europe (+110% in one year) has created a higher reference for the gas price. These trends do not pertain to the U.S. market, where the price has tended to remain stable or fall.

Average price of imports to Japan 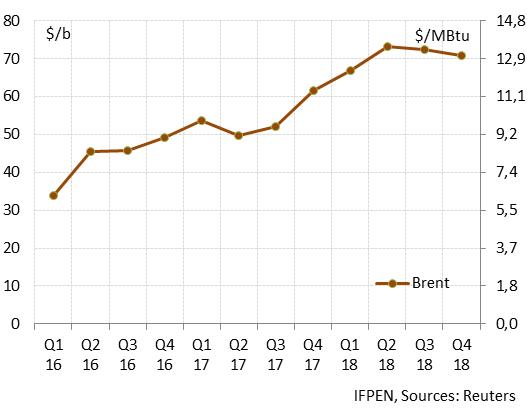 Based on current trends in the Brent forward prices , the average gas price in Japan could reach about $10/MBtu by year-end. However, the oil price will probably be subject to strong variations, as it was in Q1, when it climbed from $62 to 71/b. In upcoming months, the oil price is likely to be heavily influenced by OPEC policy, the level of U.S. shale oil production as well as the financial and geopolitical environment.

Affected by high Asian demand for LNG in Q1 (Fig. 3), the spot LNG price drew closer to long-term contract prices during this period. Pressure was particularly strong in January, when the price neared $11/MBtu. Since then, it has fallen steadily, reaching $7.9/MBtu in March. 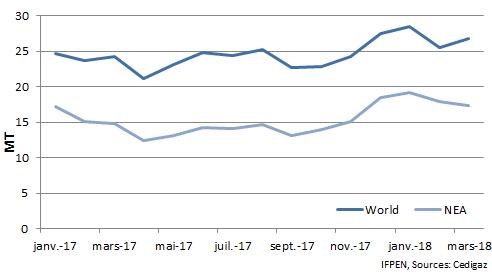 For Q2 and Q3, the forward markets are anticipating prices on the order of $8.0/MBtu, a level that is significantly higher than last year’s and reflects the hike in oil prices. For next winter, prices are expected to hit around $9/MBtu, as in the winter of 2017-18. The actual price will depend on the weather conditions.

NBP price in the United Kingdom

The NBP spot price for Q1 2018 stood at $8 MBtu, a level that is relatively high compared to the same period last year ($6/MBtu). The NBP price and the LNG spot price in Japan are trending in parallel, with the former presenting a discount of between $0.6 and 1.3/MBtu NBP, depending on the level of demand on the Asian market.

As for forward prices, the current tendency also parallels the LNG spot market in Japan. Prices of $7/MBtu – $1.5/MBtu higher than last year – are forecast for Q2 and Q3. Next winter’s prices ($7.7 to 8/MBtu) are in line with last winter’s.

For spring and summer, the increase compared to 2017 may be attributed to the trend in the CO2 EUTS price (Fig. 4). Rising from €5 to 13/tCO2, the cost of coal-fired electricity has increased by about €7/MWh at a time of relative stability in coal prices (Fig. 5 & 6). This has led to a higher reference price for gas. The LNG spot prices in Asia evolve in line with this reference price, with deviations dictated by the supply/demand balance. Conversely, in winter, the reference becomes the price of Asian oil-indexed contracts and the NBP aligns itself with the Asian LNG spot price with a discount depending on the level of demand.

Fig. 4: CO2 EUTS price (Europe) and impact on the price of electricity (from gas-fired power plants) 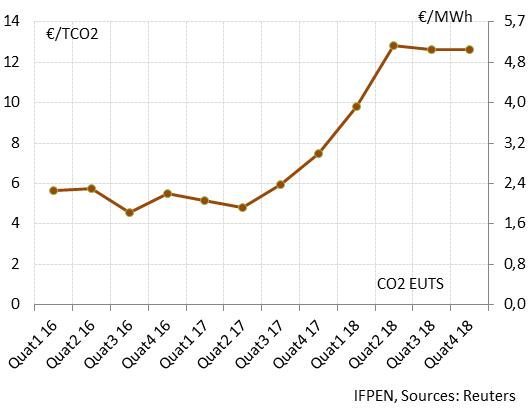 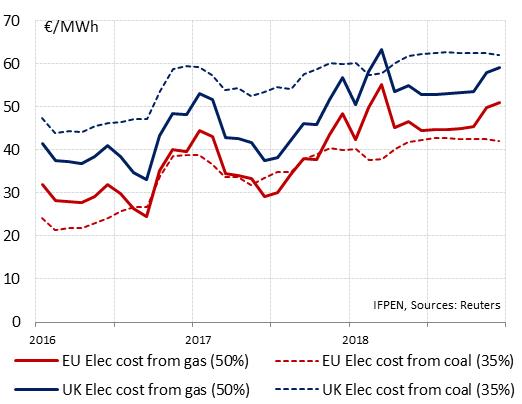 In the U.S., an especially harsh winter caused the monthly Henry Hub price to peak in January ($3.9/MBtu), with a daily peak occurring on January 3 ($7.5$/MBtu). This episode did not last long, however. Since February, the Henry Hub price has been in the vicinity of $2.7-2.8/MBtu. The markets anticipate that it will edge up towards $3/MBtu towards the end of the year. Based on current assumptions, it is thought that a Henry Hub LNG price of $3/MBtu will ensure the competitiveness of U.S. LNG on a full-cost basis on the European and Asian markets (Figs. 7 & 8). This was rarely the case in 2016 and 2017, given the low level of European and Asian prices. 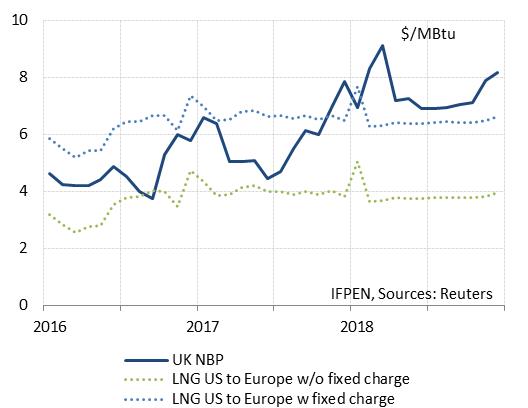 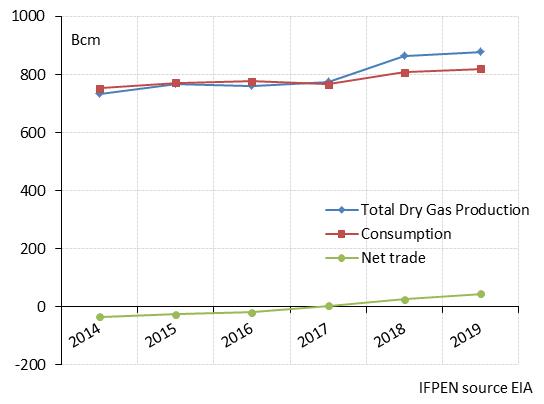