International spot gas prices had already began to slump before the Covid-19 outbreak mainly as a result of LNG oversupply in the market and high inventories combined with an unseasonably mild winter in the northern hemisphere.

On the supply side, global LNG export capacity has kept growing through 2020. The rise in capacity is mainly coming from the US as Freeport, Corpus Christi Train 2, Cameron, Sabine Pass Train 5 and Elba Island plants are being ramped up.

China’s domestic demand slowed down at the start of the year as the coronavirus outbreak disrupted industrial output. China’s LNG imports in January-February edged up to only  11.1 Mt from 10.9 Mt a year earlier. China’s coronavirus-driven downturn has compounded the LNG glut on the global spot market and has accelerated the decline of spot gas prices in both Asia and Europe, where import needs remained weak in a context of a mild winter.

Natural gas spot prices in Europe and Asia have followed a phenomenal decline, which has been even steeper than the Henry Hub.  At the end of February, the Asian spot LNG price fell dramatically,  reaching near parity with NBP, although it typically trades at a premium. The average day-ahead price in February for NBP was just $3/MBtu and for Northeast Asia only $3.3/MBtu.

From mid-March, the decline in gas prices has been accelerated by the impacts of the lockdowns amid the coronavirus pandemic. Excess spot LNG supply has been exacerbated because of a big drop in demand from countries like India in Asia as well as Italy and Spain in southern Europe that have imposed lockdowns and strict travel curbs to stop the spread of the virus.

The traditional seasonal patterns in Europe have become less certain over recent years. Gas demand is still higher during the winter season than in the summer. But traditional price spikes at times of cold winter weather conditions haven’t occurred in the last two winters. European spot prices have even opened a discount to summer monthly contracts this year, which has rarely occurred in the history of trading.

In Asia, India went into lockdown on 25 March which is due to last for 21 days. Indian LNG importers, including top buyer Petronet LNG, Gail and Gujarat State Petroleum Corp (GSPC), issued force majeure notices to suppliers as domestic demand and port operations were hit by the nationwide lockdown. It is worth mentioning that the Asian LNG market has been severely impacted by India’s lockdown as the country alone accounted for 20% of incremental LNG demand in Jan-Feb this year. The force majeure has caused a flood of new available spot LNG supply entering the market, further depressing international prices. Following the announcement of India’s lockdown, Asian spot LNG prices plummeted by 14% in just three days (one of the steepest declines in the history of the benchmark)  to below $3/MBtu. The ANEA spot LNG price for March fell to an historic low of $3.1/MBtu.

In the United States, natural gas futures held near a 24-year low in March as forecasts for milder weather and lower demand for the following week offset a projected increase in LNG exports. Front-month gas futures for April delivery settled at $1.6/MBtu, their lowest since September 1995.  The all-time low for US gas futures is $1.04 in January 1992. 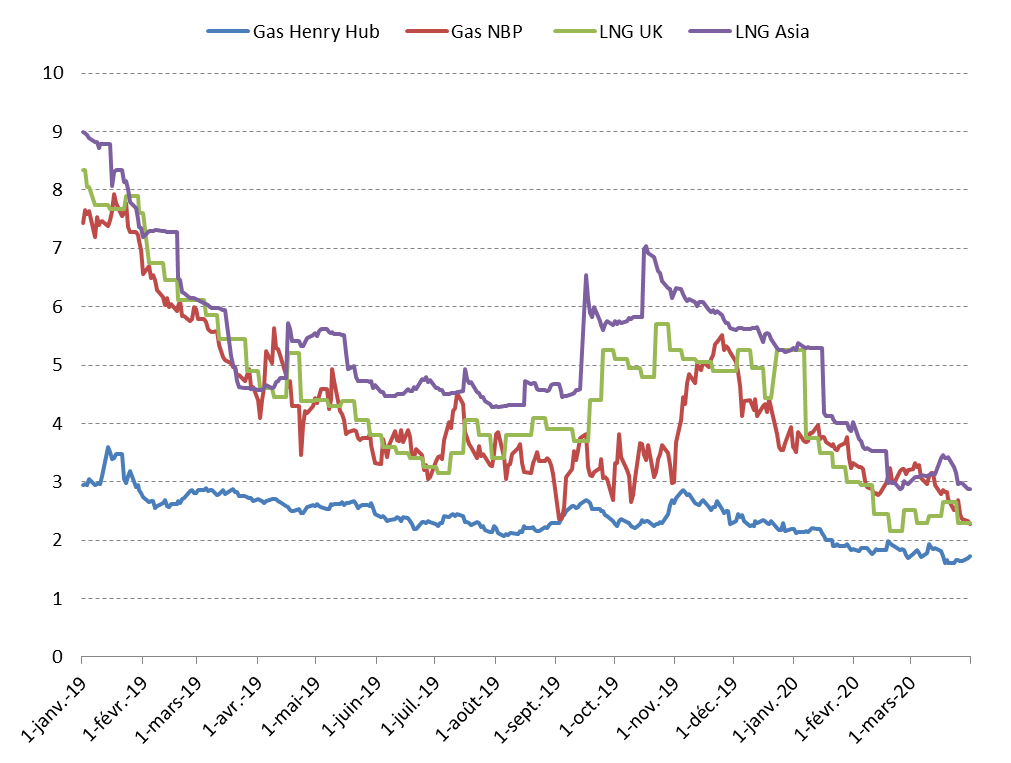 Oil prices have also fallen significantly since the beginning of 2020 under the double whammy of the coronavirus pandemic which curbs demand and a dramatic surge in supply following the suspension of agreed production cuts among the OPEC and partner countries.

However, the impact of the recent slump in oil prices on gas prices will not be seen until late in the April-June quarter because of the time lag between crude oil and LNG prices under long term contracts.

If oil prices recover from the current lows, thus resulting in a significant and prolonged disconnection between oil-indexed prices under long term contracts and spot gas prices, then buyers may be pressured to look at renegotiating the long-term oil indexed contracts and even move away from oil-linkage in new contracts.

Moreover, opportunistic purchases are increasingly favoured with companies turning down oil-indexed supply thanks to negotiations on the quantity tolerance clause.

Figure 2: Evolution of the Japan LNG price versus JCC ($/MBtu) 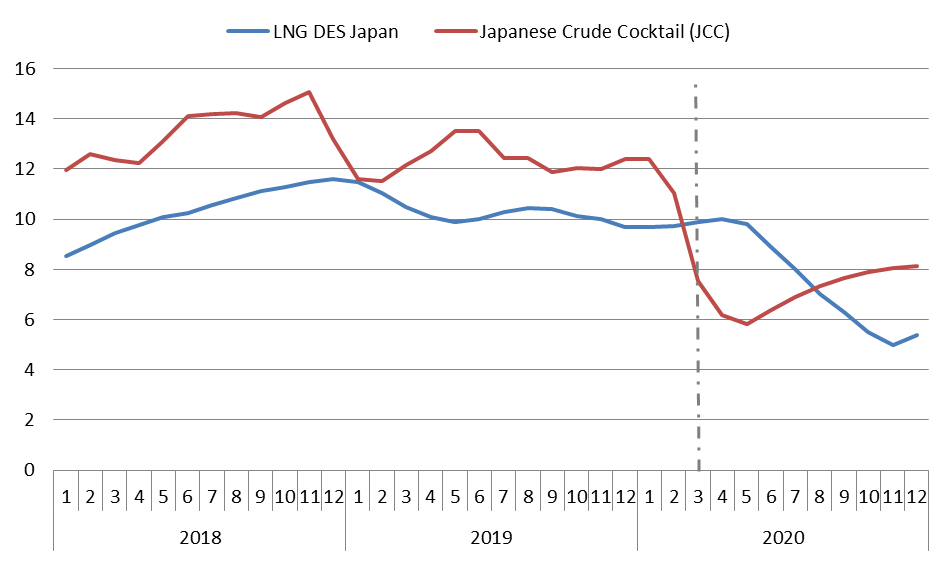 Global prospects on spot gas prices for the coming months

The forward curve shows Asian prices standing at current low levels through the summer, albeit slightly above European prices. The key factor driving future gas prices will be the growth of LNG imports into Asia. Indeed, lower growth in Asian LNG imports may push even more LNG into Europe in the next few months. LNG demand in China is expected to resume this year, but the scale of this recovery remains uncertain. Future demand in Asian emerging markets ex-China is unclear given the current restrictions which have been gradually put in place to stop the spread of the coronavirus pandemic.  Demand outlook in Europe and the US is cloudy as both regions are now bearing the full blunt of the coronavirus pandemic. The COVID-19 has already had a devastating impact on global gas demand, which could continue for some time as the pandemic spreads across continents (Americas, Africa…). In such a black scenario, supply overhang will worsen at a time when there is too limited scope to absorb the growing LNG glut through both gas storages and coal to gas switching.

European gas storage sites are closing the heating season with 25 bcm above their five year average. If injections were similar to last year, European storages could be full by the beginning of August, an exceptional  situation which could further depress summer prices both in Europe and on the global gas market.

Hence, international gas prices might slid even further into the summer period.  However, further downward pressure on gas prices will likely be mitigated by a slump in the United States’ production as natural gas prices now reach levels that threaten the economics of shale gas in many areas. The forward curves for gas prices let us predict that there might be some shut ins of LNG, from the US and elsewhere.

Figure 3: Evolution of spot prices in Europe and Asia ($/MBtu) 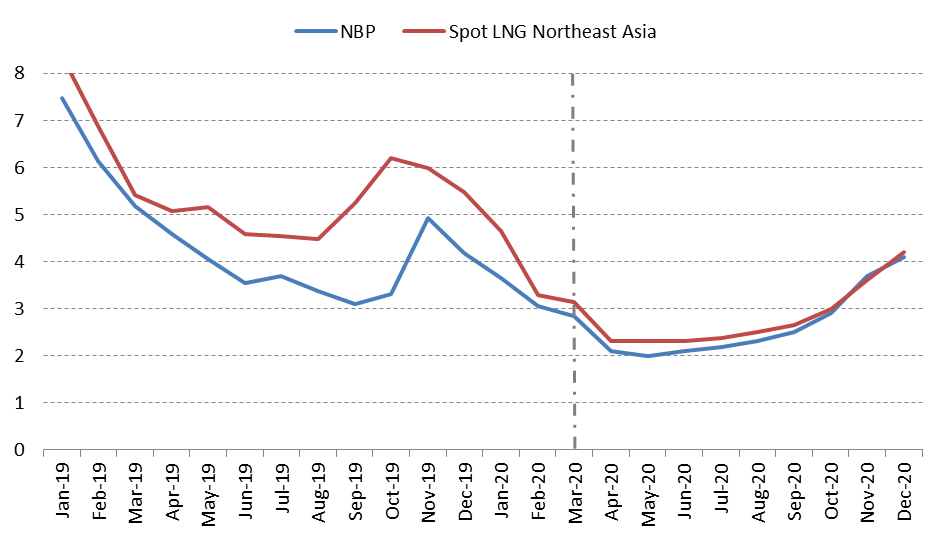 Impact of the coronavirus’ outbreak on LNG projects

At the time of writing this paper, these projects’ delays do not alter Cedigaz’ prospects for a well-supplied LNG market by 2025/2026, considering past FIDs and existing plants are now largely sufficient to balance the LNG market in both the short and medium-term. The coronavirus outbreak  does not compromise prospects for the long term growth in LNG demand as well as a future recovery of oil prices.  Moreover, it appears that large NOC-backed low-cost LNG projects (Qatar, Russia…) are still advancing on their plans so far.