This bullish trend occurs in a global context of an economic recovery which fuels energy demand and supports prices of all energies: oil, coal, electricity and gas. On the supply side, production outages occurred, and tensions mounted despite quick US LNG exports and higher Russian pipeline gas exports to Europe.

In Europe, low gas inventories, an unseasonable and persistent cold weather as well as the highest recorded carbon prices have propelled the TTF price, which provided a strong upside to Asian spot prices.

During the second quarter, Asian spot prices rose faster than European spot prices mainly due to the rebound in Chinese LNG and gas demand, against the background of the post Covid-19 economic growth.

In the US, the Henry Hub price climbed in the last days of June, on the back of an extreme heat wave and drought conditions (restrictions on hydroelectricity) in the West, which propelled electricity use for cooling. During the last week of June, the Henry Hub spot price rose from $3.3 MBtu to $3.7/MBtu. 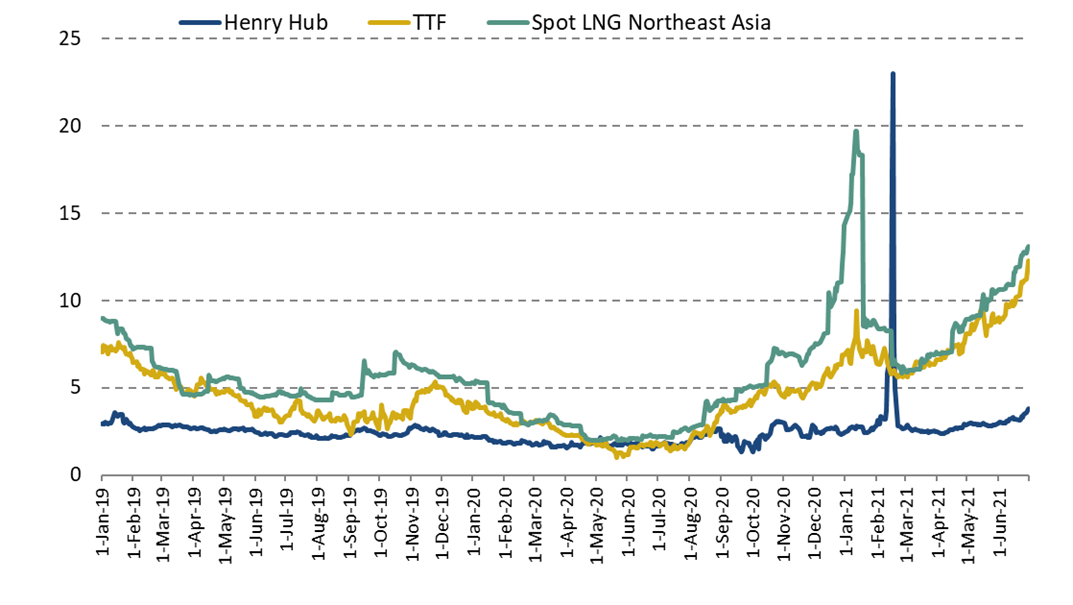 Most term supply contracts to Japan are linked to the Japan Crude Cocktail (JCC), a monthly average of costs for crudes delivered to the country that tracks spot crude prices with a lag of a few months. In June 2021, the average Japanese LNG price was estimated at 8.5$/MBtu, a strong increase from the 8 $/MBtu in May and 7.5 $/MBtu in April.

Because of the unexpected jump of spot prices in Asia during the second quarter, the oil-indexed price stood at a significant discount to the spot price in June. At the end of June, Asian spot prices were even trading at parity with Brent.

In the second quarter 2021, global LNG supply grew strongly, up an estimated 10% from a year earlier, driven by Asian LNG demand, especially in China. The global LNG supply thus continued to be massively oriented to Asia, which absorbed more than 70% of total LNG exports today. Deliveries to Europe have kept slowing in April and May, as higher-priced northeast Asian markets pulled cargoes away from the continent. It is also worth noting the strong growth of LNG imports in South America (Brazil, Argentina), which now accounts for 6% of global LNG demand, compared with 3% in 2020.

– strong manufacturing activity and a boom in export orders received by factories, probably due to operational restrictions on factories in other countries as part of measures to limit the spread of the COVID-19 virus.

– coal-to-gas switching policy in the industrial sector before winter 2020/2021, as part of the environmental measures implemented to reduce emissions.

– supply tightness for other fuels (restrictions on coal production and on coal imports from Australia, shortage of hydroelectricity), which caused a severe power shortage in the Guangdong area. 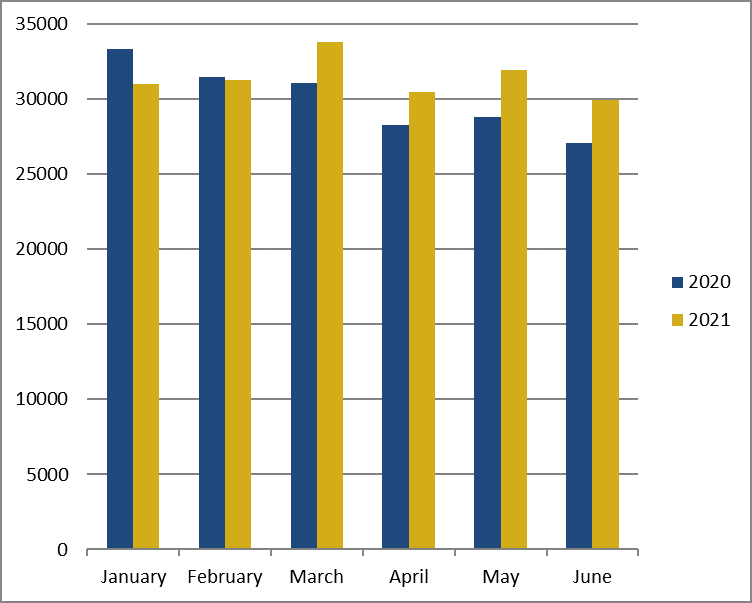 At the end of the quarter, the TTF July contract rallied to the highest recorded level at about 12$/MBtu, contributing to the jump of Asian spot prices. In the last days of June, spot prices stepped up strongly following Gazprom’s decision not to book any additional interruptible pipeline capacity through Ukraine in an auction. July Northeast Asian term spot prices have rallied above 13$/MBtu. These prices are more than 10$/MBtu higher than they were last year and 8.5 $/MBtu above the 2019 July level. It is exceptional to see such price spikes during summer months.

Forward curves suggest a continuation of current bull ride in the second half of this year, driven by growing demand backed by an economic upturn. The persistent rally could be attributed to growing demand for all energy commodities, especially for power generation and industry. Low gas inventories are fuelling the bullish sentiment. As of 30 June 2021, European gas storages were 33 bcm or 25% below the level of last year. Moreover, coal-to-gas switching in Europe remains strong as European carbon prices recently rallied to record highs (€56/t) amid a stricter environmental regulation and economic growth. Norwegian supply outages and expectations of low wind output have also boosted prices further.

In Asia, Futures prices are supported by expectations on warmer than average temperatures in the coming months and strong consumer demand in Northeast Asia, especially in China. Anticipations of persistent buoyant oil prices are also a key determinant of Asian pricing.

Strong competition for summer LNG between Europe and Asia is likely to remain. The gas market is expected to tighten this coming winter, according to market sources and analysts.

It is however important to notice that important short-term factors can more or less ease the current price boom: a slower-than-expected industrial activity because on uncertainties on the pandemic development and economic recovery, a return to growth of coal production and the resorption of the power deficit in China, unexpected weather conditions and fewer plant outages as the maintenance season has ended.