In the second quarter of 2022, European and Asian spot gas prices were on average lower than the levels of the first quarter but experienced strong trend variations. After an exceptional price surge in the days following the invasion of Ukraine in early March, prices fell back to levels of around $20/MBtu to $30/MBtu until mid-June. In Europe, the mild temperatures, the sharp fall in gas consumption, the growth in LNG imports and the high inventory filling rates had a moderating effect on prices. But since mid-June, Russian gas supply cuts through the Nord Stream pipeline and the shutdown of the Freeport LNG plant in the United States have caused spot prices to soar again. Europe is entering the third quarter on high alert, with the risk of prolonged disruptions in Russian gas supplies, prompting emergency measures.

Evolution of international gas prices in the second quarter of 2022 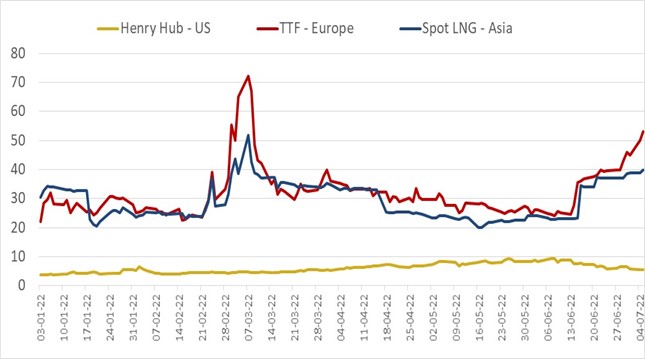 Asian market prices tracked the rise in European prices, in a context of tightening global LNG supply. In addition, an exceptional heat wave in Japan has created strong tensions on the electricity and LNG markets. Prospects for warmer than normal temperatures in Northeast Asia this summer exacerbate market tensions.

The US Henry Hub price rose very sharply in April and May, reaching nearly $9/MBtu in early June, its highest level since the record of 2008. Production growth was insufficient to meet both rising LNG exports and internal needs. But since then, the Henry Hub has turned lower and experienced a sharp drop of almost $3/MBtu, mainly due to the shutdown of the Freeport plant, which has resulted in additional gas supply (+ 55 Mcm/d) for the domestic market.

Oil-indexed price pursued their upward trend in relation with the rise of the oil price, which averaged 118 $/bbl in the second quarter, up 18% from the first quarter. In June, the average LNG price in Japan was estimated at around 15$/MBtu, which was half the level of the Asian spot price.

In the second quarter of 2022, global LNG trade is estimated up 3% compared to the same period of the previous year. Global LNG supply continued to increase under the impetus of US exports. This growth nevertheless marked a slowdown compared to the first quarter mainly due to lower availability of LNG supply.

European LNG imports continued to grow strongly compared to 2021, while Asian LNG demand kept declining, due to the Covid crisis in China and high LNG prices affecting LNG competitiveness. The European price premium over the Asian market enabled to attract LNG cargoes, in particular from the United States. The inflows of LNG into Europe partly offset the drop in Russian gas deliveries and enabled to maintain high storage filling rates. 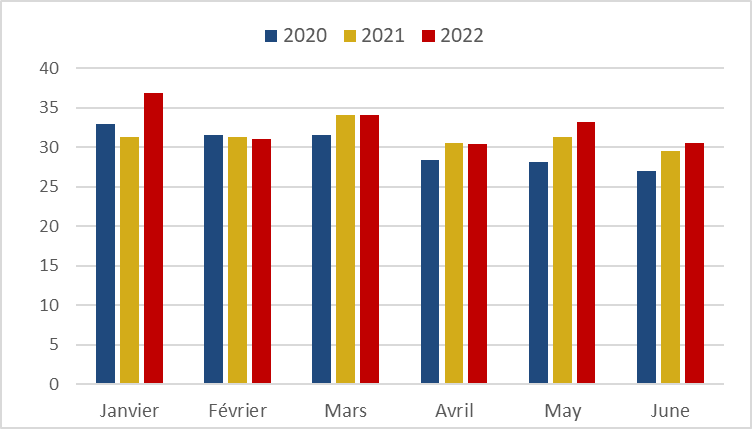 The supply of Russian gas to Europe is at a historic low, raising fears of a major supply crisis in the coming months. The Nord Stream gas pipeline, whose utilization rate has collapsed to 40%, must stop operating from July 11 to 21 for maintenance. There is a risk that the Nord Stream will no longer deliver gas after maintenance. The European gas market thus enters the third quarter of 2022 on red alert, with the reduction in Russian supplies prompting emergency measures to come, such as the recommissioning of coal-fired power plants and rationing. An explosion in prices amid hyper-volatility cannot be ruled out and the forward prices for this winter are soaring and have recently spiked to €150/MWh. In Asia, spot prices should remain under the influence of the European market, the world LNG market remaining very tight, while consumer countries have to fill their storages this summer in preparation for the winter.