The third quarter of 2021 is again marked by an explosion in European and Asian spot prices which have soared to stratospheric highs of $30 to $40/MBtu at the turn of the last quarter. As in the first half of the year, the global economic recovery and rising Chinese energy demand continue to strain energy markets and prices. During the third quarter, spot gas prices were multiplied by 2.5 in Europe and 2.3 in Asia. In the first nine months of the year, European and Asian spot prices registered record increases of 357% and 107% respectively.

The TTF price exceeded €85/MWh on 1st   October, a new daily record surpassing the previous one reached on the 1st March 2018. Specific factors to European gas supplies strongly explain the record gas price levels seen in the last three months. Russia’s pipeline exports, which in 2020 covered a third of European gas supply, have been reduced due to maintenance works on major export pipelines, a fire at a processing plant supplying the Yamal pipeline at the beginning of August, as well as Gazprom’s decision to restrict its additional and interruptible export capacities via transit through Ukraine. However, the other traditional sources of flexibility which would have allowed Europe to play its role of ” swing ” or ” balancing market” on the global gas stage have all been under strain : restrictions on exports from Norway due to maintenance operations large fields, gradually reduced production at the Groningen field in the Netherlands, relatively low European storage levels compared to previous years, lower LNG imports in favor of Asia due to insufficient global operational supply capacities and limited LNG output due to technical outages or unforeseen events … In a context of low prices, economic slowdown and the recent Covid crisis, investments in LNG export projects have been insufficient in recent years. The European spot gas price acted as a floor price and also the main upward factor for the Asian spot LNG price. 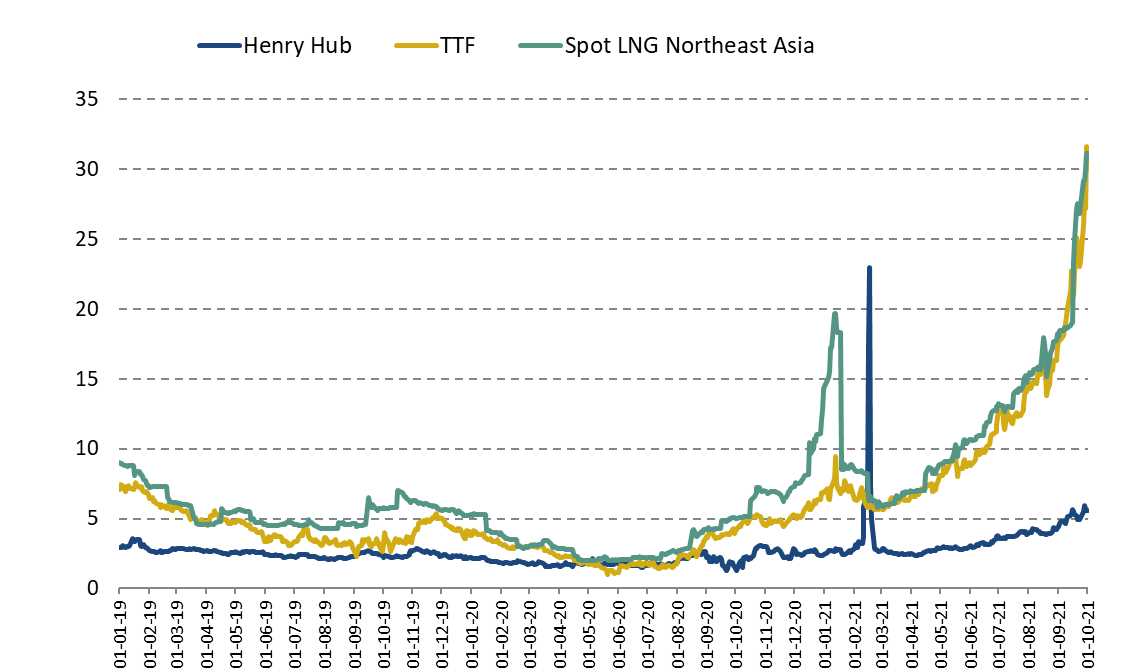 The US Henry Hub price was also under pressure and hit its highest monthly levels recorded for the past decade. This trend is explained by a strong demand for air conditioning linked to high temperatures (August), disruptions on the production side in the Gulf of Mexico due to Hurricane Ida and especially the strong growth of LNG exports compared to the year 2020 which constitutes a new factor of tension on the domestic supply-demand balance. The growth of US gas production has slowed for the last two years due to a drop in investments in production drilling, combined with climatic hazards (polar vortex and deep freeze in February, hurricanes, etc.). The storages could not therefore be sufficiently refilled.

In the third quarter of 2021, global LNG demand continued to grow, up 5% from the previous year’s quarter. This growth is driven by Northeast Asia, especially China, and to a lesser extent by Latin America (Brazil). In a tightening global market, LNG shipments have always been massively directed to Asia to the detriment of Europe, which saw its LNG imports fall by 35% compared to the previous quarter. Fierce competition between Europe and Asia to access the available LNG supply is reflected in an almost perfect correlation between the spot prices of the two continents which reach similar levels. This trend highlights the globalization of gas markets and the “commoditization” of LNG which is accelerating thanks to an increasingly flexible contractual supply, the expansion of the spot market and growing arbitrages on prices and markets. China, which is expected to become the leading importer of LNG in 2021, has an increasingly strong impact on international prices. 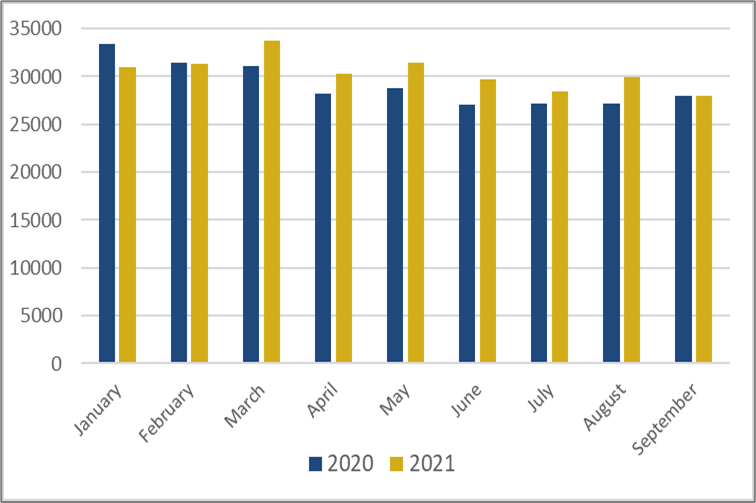 Futures indicate spot gas prices above $30/MBtu in Europe and Asia until next spring. The average European gas price in 2021 would be around $16/MBtu, compared to an average of $6/MBtu over the 2015-2019 period preceding the crisis year of 2020 when they fell to $3.2/MBtu. The need to massively refill stocks as winter approaches is significant in all the major consumer markets (United States, Europe, Russia and China). However, the LNG market should remain very tight in the absence of major additional LNG export projects.

The extent of the price spike in the coming months will depend in particular on two key factors : the weather, the impact of which is decisive in winter, and the development of pipeline gas exports from Russia, where the level of so-called ” excess ” production capacities for dealing with both the internal and external demand is a question today, regardless of the start date of Nord Stream 2.

The past period showing European and Asian gas prices below $8/MBtu now appears to give way to a period of higher prices at around $10-12/MBtu in the coming years.