In the third quarter of 2022, European and Asian spot gas prices reached new record highs but remained highly volatile. Driven by the Russian gas crisis and threats of pipeline supply cut, European gas prices peaked at over €300/MWh at end-August, contributing strongly to the European inflation. However, three bearish factors have moderated European prices over the last few weeks: the good replenishment of stocks, the very strong growth in LNG imports at the expense of China and the sharp reduction in gas consumption (plants’ closures and industrial demand destruction, energy substitution and energy savings) in response to the surge in gas prices. The massive inflow of LNG and the destruction of demand in Europe have kept storage levels high and these two factors will be crucial to get through the next winter without a deficit.

Evolution of international gas prices in the third quarter of 2022

In the third quarter, the European reference TTF price almost doubled from the second quarter to $59/MMBtu. This is almost 8 times the average third quarter level of the last three years. In the context of a tightening global LNG market, Asian spot prices increased under the upward pressure of European prices. The Asian spot price jumped 71% compared to the second quarter, influenced by the European supply crisis, with the TTF currently standing as a price setter in the global market. The Henry Hub price rose 7% to $8/MMBtu but remains at extremely low levels compared to Europe and Asia. 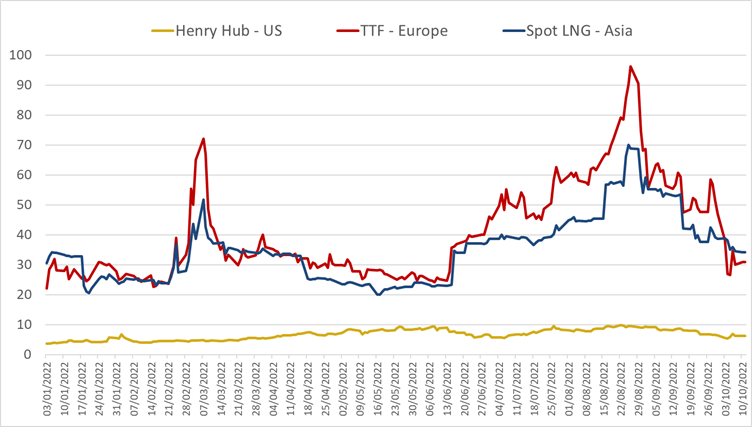 In Europe, the collapse of Russian gas deliveries, disruptions in Norwegian supplies (field maintenance) and growing concerns about the risk of a gas deficit next winter had caused gas prices to rise sharply this summer. During the month of August, the TTF price exploded with some peaks of over €300/MWh. Tensions soared following the announcement of a cut-off on the Nord Stream, which has not been operating since the end of August. In addition, heat waves this summer have increased the need for gas-fired power generation to compensate for lower hydro and nuclear generation, especially since the lower water level of the Rhine has disrupted deliveries of coal and oil products in Germany.

Although LNG imports have remained strong in Europe, they alone have not been able to compensate for the lack of Russian gas and the constraints on Norwegian supply. The sharp reduction in European gas consumption in industry and buildings has allowed stocks to continue to be filled from imported LNG at a robust rate.

The good filling of stocks has greatly reduced fears of a gas deficit this winter. The European TTF price has trended lower in recent weeks due to the abundance of stocks and probably the announcement of emergency measures by the EU to reduce energy consumption. The damages on Nord Stream 1 and 2 have not directly impacted the physical gas market, as Nord Stream 1 has not been transporting gas for over a month.

In the third quarter of 2022, LNG imports jumped by 6% compared to the same period last year. On the demand side, this growth continued to be driven by Europe, where LNG imports more than doubled year-on-year, while Asia posted a 6% decline. This latter was mainly due to China, which, faced with economic difficulties against the background of the Covid crisis, reduced its LNG purchases to the profit of more economic supply sources (pipeline gas from Russia and Central Asia, domestic production). Growth in European LNG imports was particularly strong in France and the Netherlands, the latter having benefited from the arrival of a new import terminal, Eemshaven, in September.

Tensions increased in the global LNG market. On the supply side, the closure of the US Freeport plant meant a loss of 55 Mm3/d from the LNG market. On the demand side, Europe continued to import LNG on a massive scale to replace Russian pipeline gas and to replenish stocks.

Natural gas markets remain nervous, very volatile and reactive, while gas liquidity on the trading areas has dried up. The share of Russian gas in Western Europe has now become marginal due to the physical impossibility of importing through Nord Stream.

The structure of forward prices is in contango for the coming months, in anticipation of the winter peak demand. The TTF forward price for summer 2023 is very high and reflects the risk of a shortage of stocks to get through the winter of 2023/24 because of the collapse of Russian gas imports. Thus, based on the current forward price curve, European gas prices are expected to be higher on average in 2023 than in 2022, reflecting the tensions on the world LNG market and even the risk of shortages in Europe due to the Russian gas crisis.

Prices will also react to bearish factors (energy sobriety, LNG imports, etc.) and to weather conditions, which will continue to have a major impact on all continents. The date of restart of the US Freeport LNG plant and the future availability of French nuclear power generation following maintenance issues are other important factors at play.