The US Henry Hub price was 3% higher in the last quarter. Some of the key drivers of this hike were the strong growth of US LNG exports. 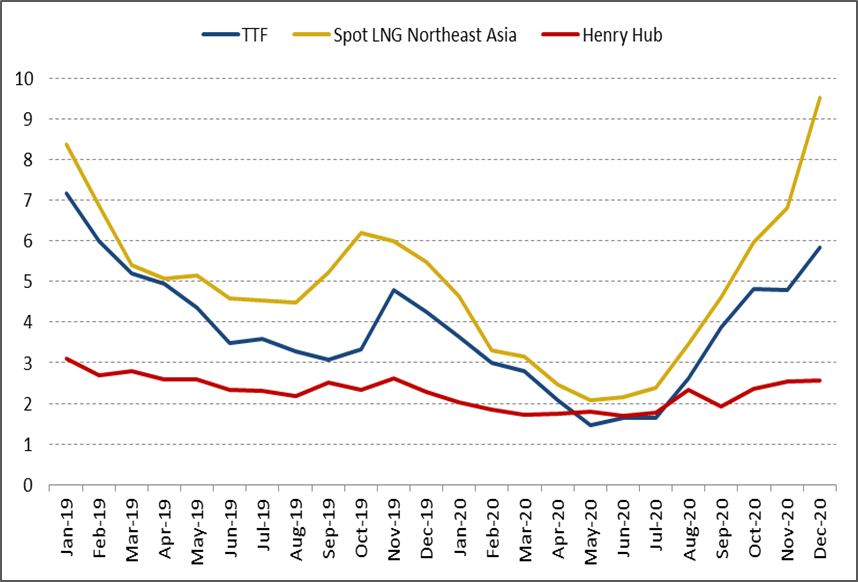 In the last quarter, the oil-indexed LNG contract price increased slightly, after a steady fall from the first quarter. Due to the several month lag, the mid-year recovery in oil prices started to be reflected at the end of the year. Oil-indexed prices inched up to just above 6$/MBtu in December. Because of the unexpected spike in Asia, the oil-linked premium to Hub price turned negative. In December, the average Japan oil-indexed LNG price was 33% below the spot level. This reversal potentially prompts Northeast Asian buyers to seek incremental long term volumes.

The Japan average LNG import price is expected down 22% to 7.9$/MBtu for the full year 2020. The year 2020 has showed a divergence between oil prices and spot prices, this latter surpassing crude oil parity towards the end of the year.

In the last quarter, global LNG demand slid again in the continuity of the previous six-months, with the largest reductions recorded in November and December, driven by Europe. The LNG trade massively shifted to Asia, which remains by far a more profitable destination. Strong northeast Asian LNG demand drew Atlantic-basin cargoes away from Europe, with the inter-basin arbitrage widely open throughout the quarter. For the whole year 2020, LNG trade is expected to post a modest growth despite the Covid-19 pandemic and the induced contraction in economic activity.

In this context, it is estimated that LNG imports into the EU28 fell by more than 30% in the last quarter compared to the previous year, while they increased by almost 20% in China, the most dynamic market. 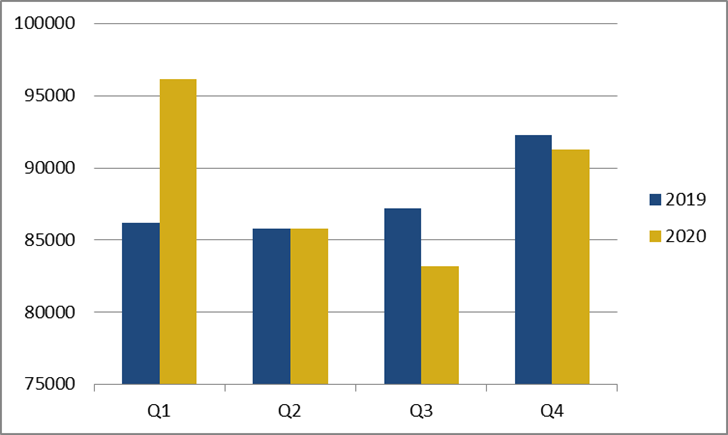 The year 2020 shows an ever-recorded hyper-volatility in spot gas prices, which was even more important than that of oil prices. The first half of the year saw a period of convergence of international spot prices falling towards record lows. The second half in contrast rather displayed a gradual divergence with price spreads breaking all-time highs at the end of December.

A rally in Asian prices since the end of November should continue to provide incentive to divert Atlantic basin supply away from Europe for deliveries in Asia in early 2021.

Thus, European LNG imports are expected to stay weak in January and February because of buoyant weather-driven demand in Asia combined with needs for LNG restocking.

The Asian price forward curve indicates a steep backwardation after a peak in February, which could left the inter-basin arbitrage tighter and prompt more US deliveries to Europe from March, especially in a context of high charter rates.

The oil-indexed Japan LNG price is expected to rise gradually to reach a peak of 8$/MBtu at the end of June 2021, while the Asian spot LNG price is assessed at 6.5$/MBtu at the beginning of the summer, according to forward contracts as of 8 January 2021.