Evolution of international gas prices in 2021 and 2022 outlook

European and Asian spot prices pursued their stellar rally in the last quarter 2021 and exploded to new historic highs in December.  The TTF increased fivefold in 2021 to an all-time high of 15.9$/MBtu on an annual average, while the Asian spot price more than quadrupled to 17.9 $/MBtu.

Price hyper-volatility prevailed on the markets for most of 2021 and intensified especially in December, when the European gas price exploded to a record of 37$/MBtu (115€/MWh) on a monthly average (to be compared with a monthly average of 18€/MWh over the last 5 years). A daily record level of 60$/MBtu was reached on 21 December. These price fluctuations show how tense the global supply-demand balance was in 2021. In Europe, the price spike has been mainly due to uncertainties over Russian gas deliveries (delay of Nord Stream 2) and the current state of historically low levels of European stocks, which are at the lowest in this period since 2011.

Expectations for increased US LNG supplies, the existence of healthy Asian LNG storages, robust and flexible Norwegian gas deliveries and higher than expected production in the Netherlands contribute to a backwardation structure of the Futures, with a relative stabilisation of European and Asian spot prices through this winter. But according to forward curves, European and Asian spot prices are forecast at still very high levels above 20$/MBtu for the full year 2022. Historically low European stocks are a major factor of tensions in the market and may result in low levels of stocks on April 1 at the end of winter. This situation contributes to a significant bullish effect on 2022 gas prices in Europe because of the expected increased demand for storage injections between April and October 2022 in anticipation of the winter 2022/2023. 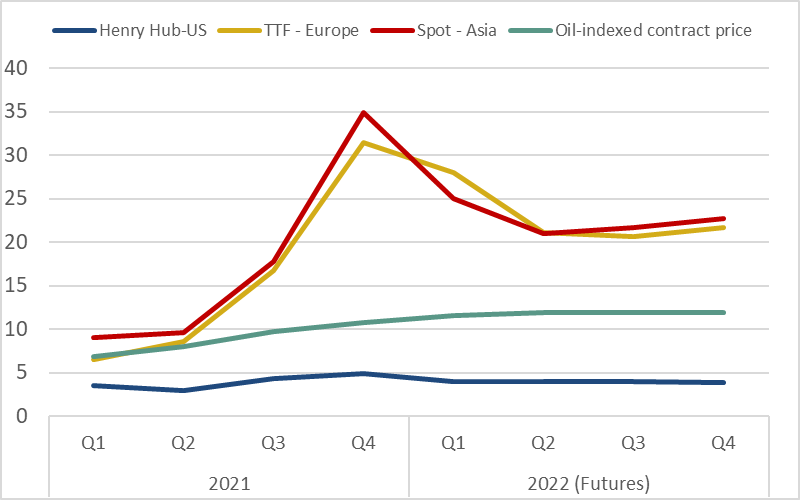 In 2021, world gas demand is estimated to have risen by 3.5%, according to CEDIGAZ provisional estimates. The largest growth occurred in China (+ 13%), Russia (+ 12%) and Europe (+ 6%). The global supply did not keep pace with the fast-growing demand, resulting in more than usual storage withdrawals in Europe. Both LNG and Russian supplies were insufficient, causing market tensions which intensified as the year progressed.

Market fundamentals were not the only bullish factor explaining the stratospheric and unreasonable levels of spot prices in 2021; geopolitical tensions (Russia/US/Ukraine, Nord Stream 2, Algeria/Morocco), the anxiety and uncertainties of market players related to the regularity and security of gas and electricity supply (Europe, China) as well as the evolution of the pandemic, exacerbated the price volatility. These trends also attest to the growing financialization of the European gas market.

The global natural gas trade in 2021

In 2021, the global trade by pipelines and LNG tankers is estimated up 7% to 1040 bcm, according to Cedigaz provisional figures. This strong growth was mainly driven by LNG trade and European pipeline imports. In Europe, increased flows from Norway, Algeria and Azerbaijan (TAP pipeline) compensated for relatively flat Russian gas deliveries.

The global LNG demand rose more than 5% to 370 Mt (492 bcm) in 2021, representing an incremental volume of more than 18 Mt (+ 25 Bcm), according to Cedigaz provisional estimates. China explained the bulk of the growth, with LNG imports estimated up 18% (+ 12 Mt; + 15 Bcm), followed by South Korea (+ 8 bcm) and Brazil (+ 5 bcm). China overtook Japan to become the largest LNG importer. On the supply side, Australia has firmly become the world’s leading LNG supplier, surpassing Qatar. But the United States narrowed the gap and even overtook Qatar in November and December to stand as the second largest LNG exporter and the leading LNG supplier to Europe. By next year, the United States is on track to become the top LNG exporter.

Applying the average LNG liquefaction plant utilization rate observed in the two previous years and the 1st quarter 2021 (around 80%), the operational LNG supply capacity is estimated at only 365 Mtpa in 2021, illustrating an unprecedented tightness on the global LNG supply-demand balance. This latter reflects the acute lack of investment in LNG supply projects that has been warned about in recent years in addition to some operational/technical problems as well as feedgas supply issues on many LNG liquefaction facilities worldwide in 2021. 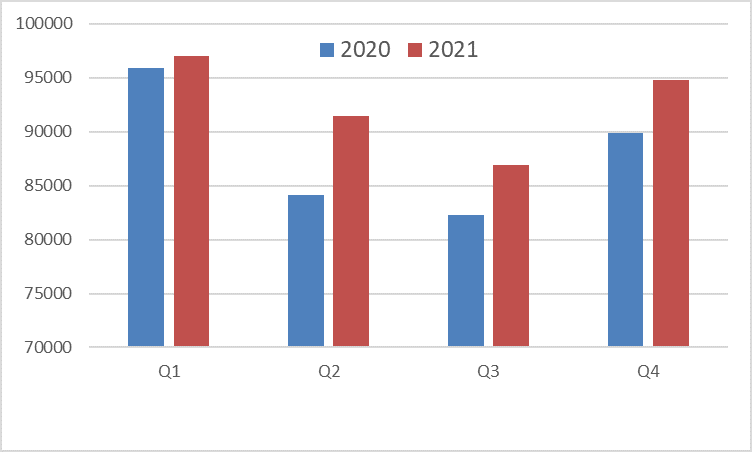