In 2014, the purchase of Repsol’s LNG assets in Peru and Trinidad and Tobago brought Shell an additional 4.3 mmtpa in liquefaction capacity and strengthened its global leadership in the LNG upstream sector. With the $70 billion takeover of BG, the Anglo-Dutch major is about to become the unquestionable leader, thanks to the world’s largest and most diverse portfolio. BG’s contracts will provide the company with an unprecedented coverage of global markets, but Shell has to keep developing LNG projects, as the medium- and long-term production of BG’s assets is uncertain.

Shell’s liquefaction nameplate capacity will increase by 43% by 2017 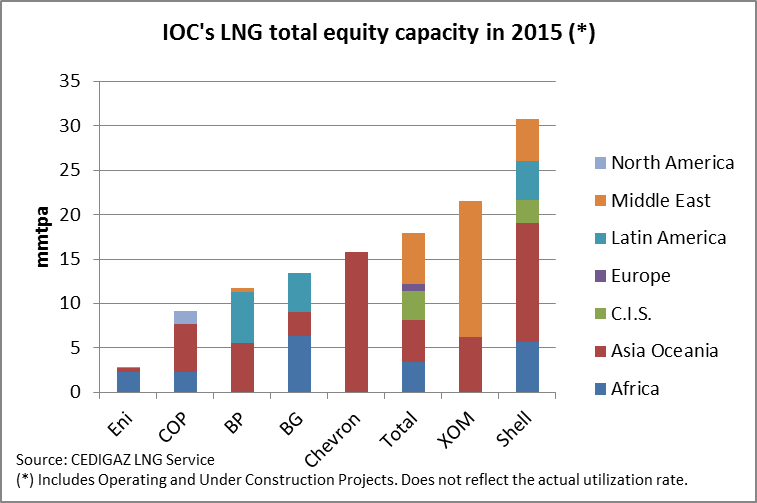 The biggest impact of the merger will affect the LNG upstream sector, where Shell is going to dominate its competitors like no company has ever done before. Shell, which sold 24 million tons of LNG in 2014, already holds the largest liquefaction capacity among private companies with a total operating capacity of 24.5 mmpta, against 21.5 mmtpa for ExxonMobil, the second largest. By 2017, 6.3 mmtpa will be added, thanks to the commissioning of Prelude FLNG and of the giant Gorgon LNG project, in which Shell has a 25% stake.

With the purchase of BG’s assets, Shell is acquiring an additional 13.4 mmpta in nameplate equity capacity that is currently operating or under construction in Egypt, Australia, or Trinidad and Tobago. This additional volume appears to be huge, but it is not as large as it seems. In Egypt, the 7.2-mmtpa Idku LNG plant is suffering from large supply disruptions and produced only 0.32 million tons in 2014. There is little chance that the plant will operate at full capacity again. In Trinidad and Tobago, where Shell already owns a 20 to 25% share in each of the four trains, production is expected to start declining from 2020, due to dwindling reserves. The main sources of growth are therefore expected to come from the 8.6-mmtpa Queensland Curtis LNG plant, which sent its first cargo in late December. With BG’s 60% share in Block 1, 3 and 4 in Tanzania, Shell is also getting a foothold in the emerging Eastern African LNG industry, even though CEDIGAZ does not expect exports to start before 2022. 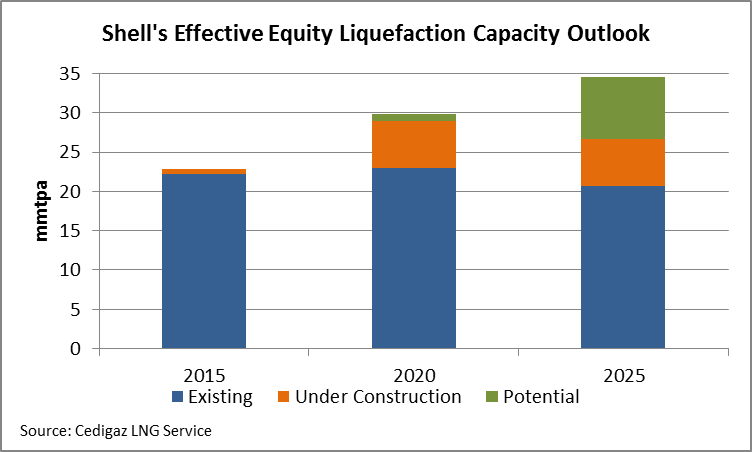 Besides liquefaction capacity, Shell is acquiring BG’s very large contract portfolio. In 2015, BG will be buying LNG on a long-term basis from plants around the world, including Atlantic LNG (Trinidad and Tobago), NLNG (Nigeria), EG LNG (Equatorial Guinea) and soon Sabine Pass LNG (the United States) for a total of 21.4 mmtpa, while Shell’s contracts currently stand at 13.1 mmtpa. Like Shell, BG’s regasification capacity is small: BG only holds a stake in the British Dragon LNG terminal (2.9 mmtpa equity capacity) while Shell’s capacity (operating and under construction) totals 4.6 mmtpa. BG owns one of the largest sales contract portfolios in the world, with contracted sales of close to 13.9 mmtpa, which does not include LNG volumes from BG assets. Taking advantage of BG’s global coverage, Shell will also benefit from the latter’s experience in LNG marketing and significantly grow its own share of global LNG sales. 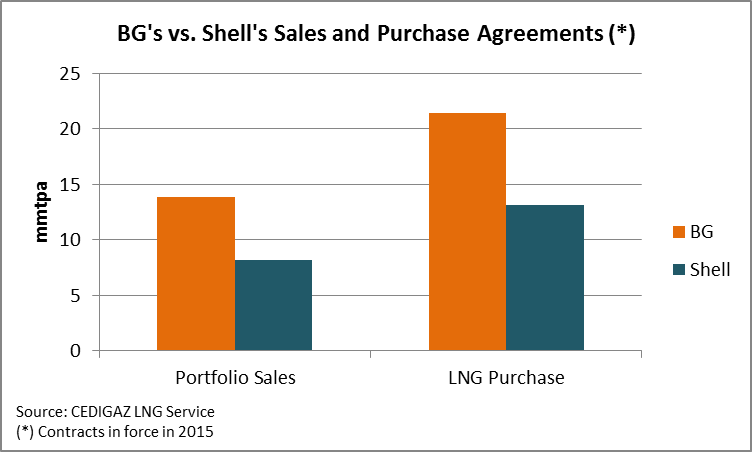 With the alliance of the two LNG giants, the question is whether Shell’s move to achieve external growth will slow down its internal growth plans. The company has developed numerous proposals to increase its liquefaction capacity. CEDIGAZ has identified three greenfield projects and three expansion projects that have a good chance of succeeding, as things now stand. These projects represent a total of 14 mmtpa and include Abadi FLNG (Indonesia), Browse FLNG (Australia) and LNG Canada. Additional production could also be contributed by new trains at the plants of NLNG (Nigeria) and Gorgon LNG (Australia) and by debottlenecking operations in Qatar. As for BG, only the Tanzania LNG project has a good chance of success, as the Canadian Prince Rupert LNG project was put on hold in the autumn of 2014. The most probable scenario is that Shell will drop the latter and focus on LNG Canada.

BG acquisition brings Shell immediate sources of growth, but medium- and long-term uncertainties regarding its Egyptian and Trinidadian plants suggest that the Anglo-Dutch company will keep working on projects to maintain its leadership.