Follow @Cedigaz_SGHome » Blog » South Korea’s phase-out of nuclear and coal: What does it mean for the LNG market?

Shortly after his inauguration in May 2017, the new President of South Korea has unveiled a new energy policy that shifts away from nuclear and coal power and focuses on renewables and natural gas instead. The move responds to growing safety concerns over nuclear power following the 2011 Fukushima accident and a series of earthquakes that hit southern Korea in 2016 and 2017. The energy transformation also responds to rising public hostility to coal power due to worsening air quality. Coal burning is also the main source of greenhouse gas emissions in the country, which has committed to reduce its emissions by 37% by 2030.

Towards a greener power mix

The new administration published the eighth electricity plan for the period 2017-31 on 29 December 2017. As expected, the share of renewables is projected to rise from 6% of the power generation mix in 2017 to 20% by 2030. This policy goal aims not only to fight climate change but also to nurture a new export industry. Following intense debate and despite opposition from the nuclear industry, the share of nuclear power is projected to fall to 23.9% in 2030 from 30.3% in 2017, confirming plans to move to a safer electricity mix. However, the shares of gas and coal differ largely from what was expected when President Moon Jae-in took office. According to initial assessments made in June 2017, LNG was expected to provide 37% of electricity generation by 2030. Under the new plan, the share of natural gas is 18.8% in 2030 compared with 16.9% in 2017, while that of coal is 36.1% by 2030 down from 45.3% in 2017. South Korea’s power generation mix would therefore remain dominated by nuclear and coal, which would still account for 60% of power generation in 2030 against 70-75% currently.

The plan appears much less ambitious than election pledges of President Moon Jae-in, who had proposed to stop the construction of eight new nuclear reactors in the country, and to review plans to build nine coal units and convert them to LNG plants. The challenges of phasing out nuclear energy was highlighted by the government’s decision in late October 2017 to resume construction of two unfinished nuclear reactors in accordance with a civilian panel’s recommendation after a deliberative process. However, even slower than initially expected, the nuclear phase-out roadmap still represents a major U-turn in South Korea’s energy policy. By 2030, the country will have 18 reactors with a capacity of 20.4 GW, while the previous administration projected a capacity of 38.3 GW and 39 reactors in 2029. After the construction of the two unfinished nuclear reactors, the country will not build any new reactors and the operating life of existing reactors will not be extended.

Moon’s election pledge to reassess the construction of nine coal power plants also encountered economic and contractual challenges. Of the nine projects, seven will be built as planned, and only two will be converted to LNG plants. After that, no new coal plant will be built in the country. Three aging coal plants were closed in 2017, seven more will be closed by 2022 and four operating coal plants will be converted to LNG over the period 2023-30. To improve air quality, aging coal plants will not operate during March to June each year, when local pollution peaks.

A nine-fold increase in wind and solar power

The key policy target of the new administration is to rise the share of renewables in electricity generation to 20% by 2030. To reach the target, the government projects new and renewables capacity to increase from 11.3 GW in 2017 to 58.5 GW in 2030. Solar and wind power capacity are expected to increase nine times by 2030. Although the 20% target for renewable power generation is not particularly high by global standards, there are some obstacles in South Korea such as the lack of space, local opposition and reluctance on the part of local authorities to issue permits. The government has unveiled an ambitious plan to reach the target, which includes public support and investment in renewables, opening of the power generation and supply market for renewable facilities to draw more private companies into the new energy market, and easing of permit regulations. State power generating companies have announced plans to invest $40 billion by 2035 to add 33 GW of renewable capacity. Despite the obstacles, the 20% target is certainly achievable, given public support to the sector and the dynamism of the Korean manufacturing industry.

A greater role for LNG generation

Natural gas was expected to be the other beneficiary of the new energy policy, filling the gap left by the reduced reliance on coal and nuclear, and the increasing contribution of renewables. But the energy transformation is slower than initially expected, leaving much less room for gas. Gas-fired generation is squeezed by limited growth in power demand, the rising share of renewables and the still high role of coal generation. Based on the new electricity plan, LNG generation is expected to grow by an average 1.9% per year over the plan period. In addition to the conversion to LNG of six coal units, new gas-fired power plants are expected to be built after 2026 to ensure the stability of power supply.

Despite the low ambition of the current plan as far as coal-to-gas switching is concerned, the new government has put in place key policy tools that will alter the power generation mix in the medium and long term. Coal-to-gas switching depends on fuel prices and taxes applied to LNG and coal consumption. Today, taxes applied to LNG consumption are higher than those applied to coal and power spreads favour coal over gas. The government will correct this situation. It will raise the tax on coal consumption and a new environmental tax will be levied to help the energy shift. The new tax will reduce the competitiveness of coal. Power tariffs will also be reformed to reflect the long-term shift to renewables. The new government policy is likely to take some time to have an impact and gas demand by power plants will increase faster after 2025, when the gas market is liberalized. 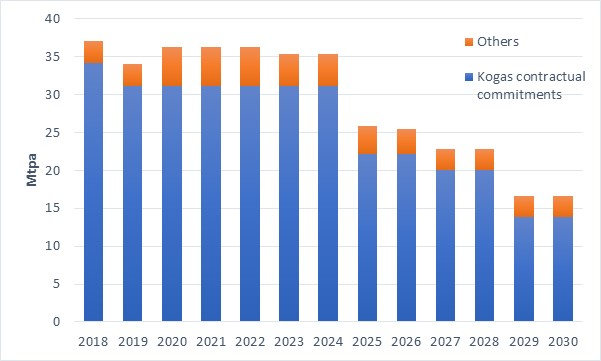 When fully implemented, the new policy will create new opportunities for global LNG suppliers as its outcome is in sharp contrast with the previous administration’s electricity plan which projected a drastic reduction in LNG generation by 2029. This report estimates that South Korea’s total LNG demand could now rise by some 34% over the next 13 years from 35 Mt in 2017 to 47 Mt in 2030. This is a major change compared to the 12th long-term natural gas supply and demand plan, published in 2015, which projected a decline in total gas demand to 34.7 Mt in 2029. This new demand is a boon for LNG producers which are looking for new outlets, although it represents a tiny share of what Chinese growing LNG demand adds to the market each year. In addition, as its contracts with two major suppliers expire in 2024, state-owned gas company, KOGAS, will have to renew and/or negotiate new LNG supplies. KOGAS has already sought the market and has signed four non-binding memorandums of understanding with US LNG suppliers. A move towards more flexible destination and new price indexation is expected. Which type of contracts South Korea signs in the future may strongly influence the Asian and global LNG market and its flexibility.