The new CEDIGAZ report, U.S. Natural Gas Update and Outlook*, analyzes the consequences of the oil price decline on the U.S. oil and gas sector as well as the implications for production and hydrocarbon prices.

The oil price decline has left American producers in a situation like that of 2009 following the collapse of the Henry Hub gas prices. At the time, shale gas production was growing fast but demand was depressed due to the effects of the subprime mortgage crisis. Producers reacted by redirecting their investments towards liquid-rich deposits (containing oil or natural gas liquids) and were thus able to benefit from the oil price recovery. This strategic reorientation did not penalize gas production, which continued to grow, thanks to the gases associated with oil production which, in recent years, have been responsible for almost all growth in gas production. Today, more than 50% of the shale gas produced in the United States comes from liquid-rich deposits. Consequently, any decrease in liquids production occurring in reaction to falling oil prices is bound to have major repercussions on domestic gas production. 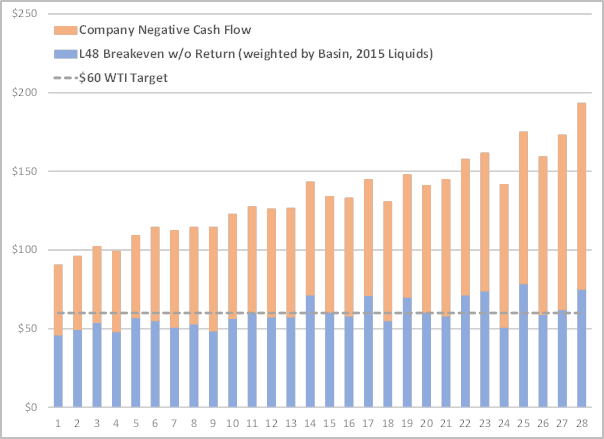 One year on, the collapse in the barrel price does not seem to have significantly affected U.S. shale oil production, which has continued to grow. This seems to bear out the opinion of many analysts, convinced that U.S. producers can prosper at a price per barrel well below 80 dollars, or even 60 dollars. This opinion is usually based on drilling profitability calculations that do not account for the financial charges generated by non-recoverable expenditure (e.g. the “sunk costs” associated with the acquisition of land, concessions and so forth). These investments are usually financed by debt and continue to weigh on corporate balance sheets. According to CEDIGAZ factoring in these constraints will bring the actual marginal cost of production for U.S. companies at least to 80 dollars a barrel.

The production of unconventional resources (gas and shale oil) represents 70% of oil production and 50% of gas production. One characteristic of the shale hydrocarbon economy is that wells produce at a rapidly declining rate (which, in some cases, can reach 90% in the first 18 months). Capital must be injected on an ongoing basis simply to keep output stable. Since the current oil prices do not generate profit margins that allow producers to pay off their debt while continuing to invest, the latter are always having to turn to the financial markets to refinance. As a matter of fact, many producers were reporting negative cash flows even before the crude prices plummeted.

The cost of the strategic reorientation towards oil deposits, which started in 2009, was high. In 2012, U.S. producers wrote off between 50 and 60 billion dollars in depreciated assets. They managed to do this by injecting massive amounts of capital and accumulating a great deal of high-yield junk bond debt. In the July 4, 2015 issue of The Economist, the total debt of U.S. shale firms was estimated to be almost equivalent to that of Greece. These companies are handicapped with weakened balance sheets as they strive to cope with the low price of oil. According to an article in The Wall Street Journal (“Regulators Warn Banks on Loans to Oil, Gas Producers,” July 2, 2015), the Federal Reserve and other regulatory agencies recently warned U.S. banks that many of their loans to oil and gas producers exposed them to a high level of risk. The article said that “banks have been flexible with troubled energy companies to avoid triggering a flood of defaults and bankruptcy filings but regulatory pressure could force them to tighten the purse strings.” It seems inevitable that the sector will see consolidation as well as rationalization, which will bring down oil and gas production. 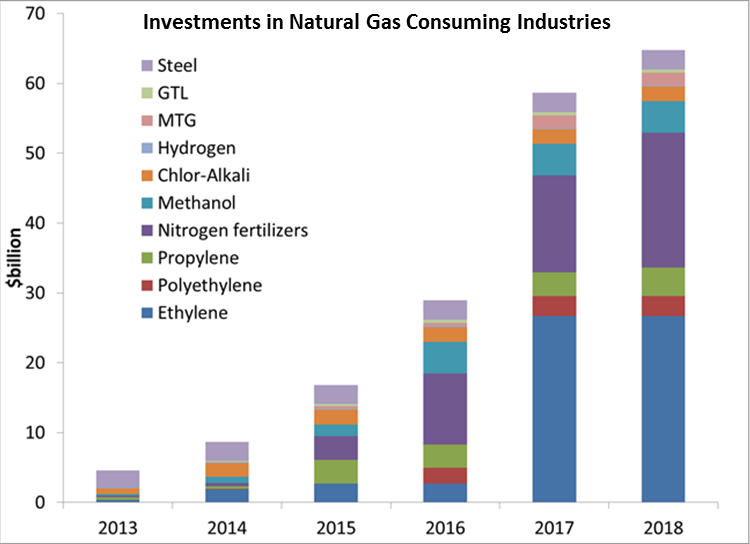 But while U.S. gas production is expected to take a downward path, demand is expected to rise and might even be stronger than the reference forecast issued by the Energy Information Administration, part of the U.S. Department of Energy. The downtrend in gas prices occurring since 2009 has stimulated demand. In the power sector, natural gas has won market share away from coal. Between now and 2020, the closing of old power plants (coal-fired or nuclear for the most part) and the implementation of stricter environmental standards should favor the use of gas in the electricity industry. Many industrial projects under development, especially in the petrochemicals business, will also help boost gas demand.

Given the dynamics of supply and demand in the United States, it would seem that gas prices in North America will have to go up, whereas oil prices could stay relatively low for an extended period. This would penalize the export of U.S. LNG, whose prices are indexed to Henry Hub prices, compared to competing sources whose prices are usually indexed to the oil price.