The EU gas and energy sector is in the midst of a profound transformation driven by decarbonisation, digitalisation and decentralisation. The latest report by Cedigaz analyses in ten key points the evolution of the gas sector and includes forward looking views on new trends in EU gas markets.

1. Decarbonisation: The EU has a high decarbonisation objective. With the ratification of the Paris Agreement in 2016 and the 2030 climate and energy framework, the EU energy mix requires a profound transformation. The legislative process to implement the 2030 goals was initiated with the Energy Union Package in 2015 and subsequently by the Energy Security Package and the Clean Energy Package. Already, Europe’s energy system is moving fast from a fossil-fuelled energy system to a low-carbon, more digital and consumer centric system. In this new context, the role of gas in the clean energy transition needs to be defined. 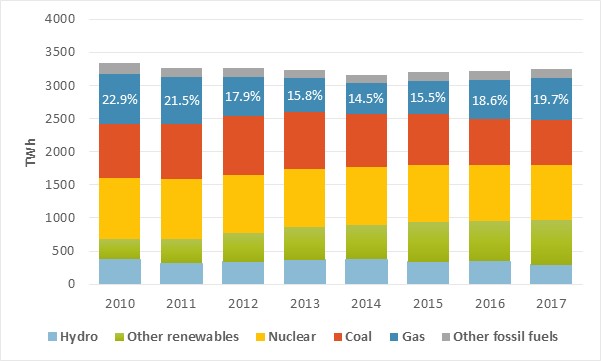 2. EU gas demand: Since 2015, EU gas demand has increased, reversing the declines registered over the period 2011-14. EU gas demand reached an estimated 483 bcm in 2017, up 5% over 2016, helped by a strong pickup in economic activity and a continuous expansion of gas use in the power sector. Coal-to-gas switching has played a pivotal role. The share of gas in electricity generation rose to 19.7% in 2017, 5.2 percentage points above 2014. During the same period, the share of coal declined by 4.6 percentage points to 20.6% in 2017. Since 2015, natural gas has also shown its flexibility to replace lost output due to lower nuclear, hydro or wind availability.

Natural gas production in the Netherlands

3. EU gas production: The EU natural gas production is in structural decline due to the depletion of conventional gas reserves. The decline is accelerated by the fall of the Dutch Groningen gas field, following earthquakes in the region. Shale gas is not expected to reverse the trend. Except the United Kingdom, there is no significant development in Europe, and even in the United Kingdom, shale gas development is still uncertain.

4. EU gas imports: Strong consumption and falling indigenous production have provided support to rising EU imports, which have increased by some 80 bcm since 2014. Most of the increase has been covered by imports by pipeline, mainly from Russia. So far, and despite their substantial rise in 2017, EU LNG imports remain much below their peak in 2010, as competitive gas supplies by pipeline are available. 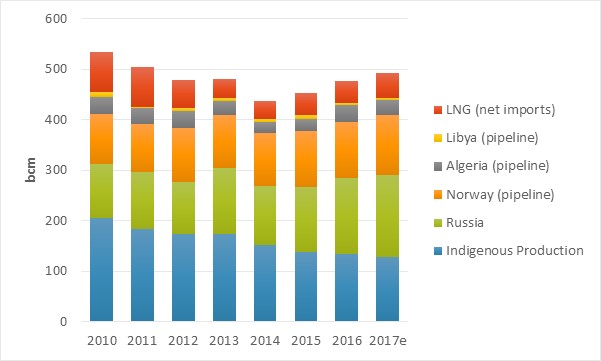 In the future, EU LNG demand is expected to increase: new outlets are being developed, e.g. the transport sector; major energy companies are building the required infrastructure; and some EU countries are diversifying their gas supplies to avoid over-reliance on Russian gas. Russian gas and US LNG are expected to compete for market shares on the EU gas market. The outcome will mainly depend on the supply glut on the global LNG market (so far not realised), the response of Russia to rising competition, and the extent of coal-to-gas switching in the EU power sector.

5. Trading hubs and gas pricing: Market hubs in Europe are becoming more and more mature, resulting in an increased price convergence of the gas markets. However, Europe is still some way from being fully liberalised across all countries. Only the Dutch TTF and the UK NBP can be considered as mature hubs. In 2017, traded volumes decreased slightly in most hubs. TTF has remained the leading European gas hub, outpacing NBP for the second consecutive year. In line with improved liquidity at hubs, gas pricing has continuously evolved towards market prices at the expense of oil indexation, although there are still major differences between European sub-regions. The average price of EU gas imports rose to $5.65/million Btu in 2017 but, still, remained relatively low.