The International Association CEDIGAZ has just released its National Hydrogen Report: “The Netherlands to become the foremost North-Western European hydrogen hub”, which provides detailed information on the Dutch hydrogen policy as well as market and project developments on both the demand and supply sides. It emphasizes that the Netherlands is now among European frontrunners in the new hydrogen economy and is well positioned to become a European gateway for global clean hydrogen.

Since the beginning of 2022, EU and Dutch efforts to scale up renewable hydrogen production and imports have accelerated. The Dutch government is now assessing the feasibility and desirability of targeting at least 8 GW of electrolyzer capacity by 2030.

The Netherlands is already a major user of (grey) hydrogen. It is the EU second largest market, behind Germany. Creating a market for green hydrogen to decarbonize industrial clusters is one of the key objectives of the Dutch policy.

The Netherlands will be the first country in the world to make its existing natural gas transmission network suitable for hydrogen. The €1.5 billion Dutch hydrogen backbone, which is part of the future European Hydrogen Backbone, will give the Netherlands a clear competitive advantage.

Map 1: Planned hydrogen backbone in the Netherlands by 2030 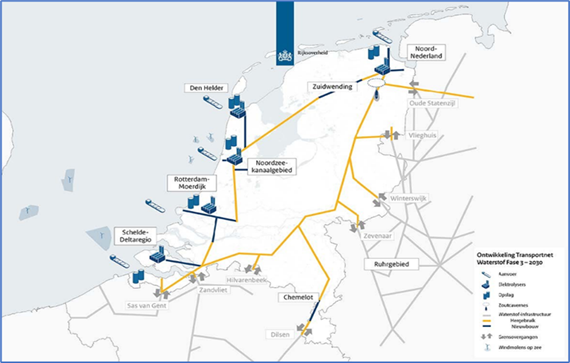 On the production side, the momentum for green hydrogen has accelerated to the detriment of blue hydrogen following the invasion of Ukraine and the surge in gas prices. There is a high level of green hydrogen project activity and the pipeline of green production projects is huge, demonstrating the willingness of the industry to invest in the new hydrogen economy.

The Netherlands has a favorable starting position with its industrial clusters, offshore wind, ports (Rotterdam, Amsterdam…) and intensive gas infrastructure. The number of proposed hydrogen import terminals has surged and strong cooperation and partnerships are built with neighbouring and overseas countries to initiate hydrogen supply chains. With its experience as a key European gas hub, the Netherlands is well placed to become the foremost European green hydrogen hub.

CEDIGAZ (International Center for Gas Information) is an international association with members all over the world, created in 1961 by a group of international gas companies and IFP Energies nouvelles (IFPEN). Dedicated to gas information, CEDIGAZ collects and analyses worldwide economic information on natural gas, LNG, renewable gases (hydrogen, biogas) and unconventional gas in an exhaustive and critical way.