Kuwait is mostly known as one of the world’s largest oil producing nations and as a leading member of OPEC. But the country was also a pioneer in 2009 when it became the first in the MENA region to import LNG via a floating storage and regasification unit. At the time, LNG was considered a stop-gap solution to address chronic electricity shortages that threatened Kuwait’s economic and socio-political stability.

Today, Kuwait continues to lead the way in the region by being the first LNG importer to invest in a land-based LNG import terminal. The 22 mtpa facility, for which construction has begun at Al Zour industrial area, is scheduled to come online in 2021. Cedigaz’s latest report examines the risks and opportunities of Kuwait’s LNG strategy.

Despite Kuwait’s significant gas reserves, LNG imports rose more than six-fold between 2009 and 2017, amid a growing focus on natural gas in the government’s energy policy. In addition to bridging the supply gap with domestic gas production, the decision of Kuwait National Petroleum Company to invest in one of the world’s largest LNG import facility confirms plans to shift the structure of the country’s energy makeup. Even if oil continues to dominate the primary energy mix, the growth of LNG imports is allowing gas to take a greater proportion. 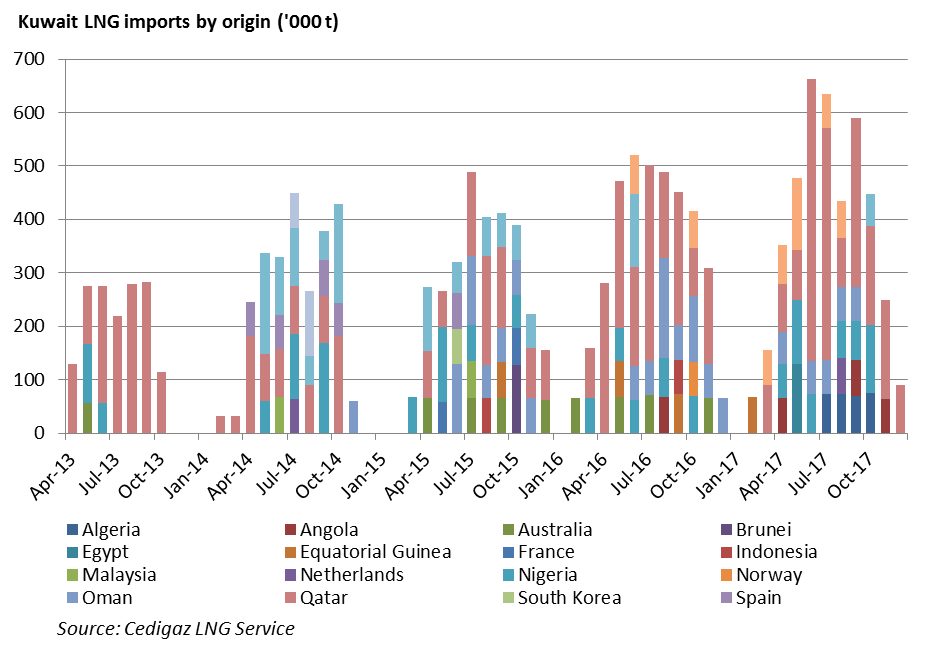 This comes at a time when reduced hydrocarbon revenue since the oil price collapse in mid-2014 has been exerting greater budgetary pressure. This is also placing more emphasis on economic reforms, starting with the phase-out of energy subsidies in order to reduce budget deficit and rein in per capita energy demand.

Adding to economic challenges, other risks such as the growing climate change agenda and uncertainty over future OPEC policy, are forcing authorities to adjust their strategy to maximize oil revenue in the medium term. With around half of Kuwait’s current power capacity consisting of steam turbines mainly burning oil products, there is potential for gas to play a greater part in efforts to push high-value oil products to exports markets. The transformation of Kuwait’s downstream sector is another driving factor in the security of fuel supply strategy for power plants. The future 600,000 b/d Al Zour refinery that is currently under construction is expected to supply oil products for the power sector, but external market dynamics may influence domestic allocations for the benefit of exports.

Therefore, taking into account the growing availability of global LNG supplies and expectations of affordable prices in coming years, the cooled fuel is becoming a key element in Kuwait’s energy policy.

But there are risks to import dependence and as examined in the report, LNG represents a flexible alternative mostly if Kuwait delivers on much-needed changes to its wider energy sector. These range from further subsidies reforms and energy efficiency measures, to boosting indigenous gas production from the Jurassic gas fields and stepping the development of new power generation capacity – including from renewables. However, in addition to navigating institutional and political risks in an effective manner, the implementation of a suitable commercial and legislative environment for investors also remain necessary if Kuwait is to create a sustainable and diversified energy and economic future for itself.